It seemed as if Spring would never get to the New York area this year: while Winter 2019 was neither particularly snowy nor extraordinarily frigid, the seemingly constant barrage of cold, wet air was debilitating. So the return of George Balanchine’s A Midsummer Night’s Dream, which closed New York City Ballet’s Spring, 2019 season and its 2018-2019 year, was particularly welcome.

Shakespeare’s story require no elaboration, and Balanchine’s adaptation of it only minimal comment. Balanchine essentially covers the story’s basics in Act I of his ballet, and creates an Act II, which includes much (though by no means all) of the dance’s choreography, out of thin air: transferring the “Wedding” to the beginning of Act II, and then creating a celebration of it. The highlights, aside from the comedy and how the four dancers playing the human lovers carry it off, are the portrayals (both characterization and execution) of Titania and Oberon, the Act I pas de deux for Titania and her Cavalier, the Act II divertissement pas de deux, Puck, the execution by the Amazon Queen, Hipollyta, Butterfly, the characterizations, and the young dancers from the School of American Ballet who play butterflies and fairies. That about covers everything in it, but, as is always the case, the devil is in the details. 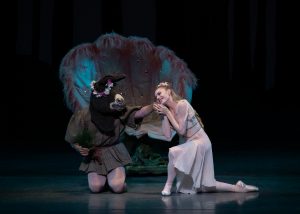 But Dream is far more than its component parts, and heretical as it may sound, Dream is also more than its component cast members: at this level, anyone in the Company will deliver superlative performances. Dream is guaranteed to send any viewer, whether familiar with ballet or not, home happy – and the collective “aahhh-that’s where it comes from” as the orchestra opens Act II with Mendelsohn’s Wedding March may alone be worth the price of admission. Dream is a … dream.

I saw two performances during Dream’s seven-performance run: Wednesday, May 20 and Friday, May 31. Neither cast disappointed, and with only a few exceptions, the highlights of one were essentially the same as the highlights for the other.

Although not part of the story per se, for me the most magical part of the ballet (aside from its concluding image) is the Act II pas de deux. For his first full length ballet choreographed in America (it’s difficult to believe, but it opened NYCB’s first season at Lincoln Center in 1964, and was created two years before that), Balanchine wisely decided to save the best for last. But to do that, as well as some other additions to the story, he had to augment Felix Mendelsohn’s score (Overture (Op. 21) and Incidental Music (Op. 61) for A Midsummer Night’s Dream) with additional Mendelsohn music. With respect to the Act II pas de deux, the musical augmentation fit within perfectly within the ballet’s parameters. The choreography does too. 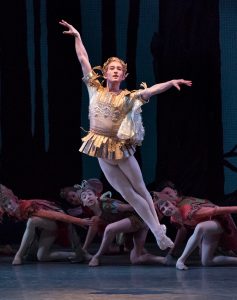 I can’t say that the Act II pas de deux is Balanchine’s most romantic pas de deux – there are so many of them. But I suspect it’s his most obvious paean to love, and in one dance it encompasses (aside from the comedy) what A Midsummer Night’s Dream is about. Every time I see it, I sense that I’ll never see another executed as meaningfully, and with such muted but obvious passion. And Balanchine summarizes it in one brilliant moment: the pas de deux’s final moving image of the danseur cradling the ballerina in his right arm, and then almost imperceptively nudging her into a momentarily unsupported “free fall,” only to be again cradled – this time within his welcoming left arm. In a ballet filled with magical moments, this is the most choreographically magical of them all.

On Wednesday, Sterling Hyltin and Amar Ramasar danced the pas de deux. Hyltin never fails to deliver an exceptional performance in any role, and this was no exception. But for this performance, Ramasar’s presence was more meaningful. I once wrote that Ramasar was the most underrated of NYCB principal dancers. That tide turned shortly thereafter, and he’s been recognized by audiences as one of NYCB’s best. His absence in the last few seasons was bewildering, but having him now back where he belongs is almost as much of a joy for audiences as it doubtlessly is for him. And here, the warmth between Hyltin and Ramasar, and between them and the audience, was palpable.

Two nights later, Lauren Lovette returned to this role (her only performance of it this season), partnered by Andrew Veyette. Lovette was as magical as she always is, delivering a superlative portrayal, maybe even more dreamy than I’ve previously seen. But the surprise, to me, was Veyette. Veyette frequently appears distant and a bit underachieving, but he always somehow manages to pull a finely executed performance seemingly out of his hat. This was no exception. My initial take was that he and Lovette did not appear to be the best of pairings, but by the pas de deux’s end, Veyette had convinced me, yet again, that he’s an excellent partner who may appear less exciting than others, but he gets the job done. And this was his role debut. 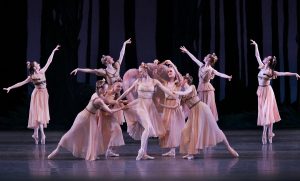 Mearns is a first rate Titania, as is Reichlen. Each executed with flawless precision, each executed Balanchine’s choreography (including her Act I solo) with unusual flair, and each brought an essential level of warmth to their portrayals to accompany the equally essential appearance of nobility. Perceived differences between their performances are subjective: to my eye, Reichlen’s Titania appeared to me more “fairy-tale” genuine, and her presence fit the role slightly better, but she was aided in that respect by a superlative performance by her Cavalier, Silas Farley, who brought a compelling presence to his role that Wednesday’s Cavalier, Russell Janzen, lacked. As a result, the Act I pas de deux which often looks perfunctory, looked regally (i.e., coolly) passionate.

Huxley’s Oberon is a remarkably accomplished portrayal, not just because he overcomes his slight appearance to appear legitimately and naturally regal. It almost goes without saying that his execution was both immaculate and exciting. 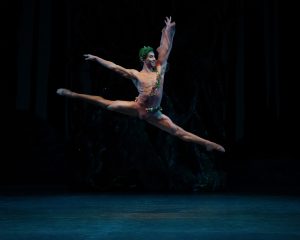 Puck is the engine that makes A Midsummer Night’s Dream move, and the hyper-energetic character that is most indelible. Harrison Ball and Roman Mejia assayed the role on Wednesday and Friday, respectively. Perhaps unintentionally, Ball added a touch of seriousness – maybe malevolence – to his portrayal, making the role look more complex and interesting, and certainly different from the norm. Mejia, who debuted in the role earlier in the week, was squarely in the more traditional lovable rascal camp, and his Puck was particularly endearing.

I’ve seen Georgina Pazcoguin’s Hippolyta previously, and she always delivers the requisite commanding portrayal befitting an Amazon Queen. Wednesday’s performance, however, seemed more bullish than royal. On the other hand, Friday’s Hippolyta, Emily Kikta, gave one of the finest portrayals of this role that I’ve seen. Aside from sterling execution, her Hippolyta was a compelling Warrior Princess, making the role compelling as well as exciting, as well as a believable bride to Aaron Sanz, her effusive Theseus.

Wednesday night’s lovers were played by Erica Pereira, Lauren King, Lars Nelson, and Daniel Applebaum (respectively as Hermia, Helena, Lysander, and Demetrius); on Friday these roles were assumed by Emily Gerrity, Unity Phelan, Andrew Scordato, and Alec Knight. Comic timing is critical for these roles, and although both casts were commendable in that respect, Friday’s was a bit cleaner. Both Pereira and Gerrity shined in their respective Act I, with Pereira appearing more appropriately frazzled, but that’s really a distinction without a difference. In roles that are far more demanding than they appear, Kristen Segin and Claire Von Enck were equally fine as Butterfly.

Lastly, the 24 young SAB ballerinas-in-the-making who portrayed Butterflies and Fairies in Oberon’s Kingdom add an undeniable and invaluable magical ingredient to Dream, and they’re an exceptionally capable group. As much as any of the other components of the ballet, they’re a breath of fresh air, and they make A Midsummer Night’s Dream the dream it always is. 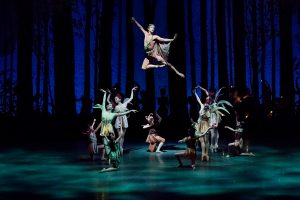 The conclusion of a season is a time to take stock, and to opine on NYCB’s accomplishments and its future. Overall, the company is performing at a very high level, and is rapidly and adequately filling holes created by recent departures and inevitable injuries. But, as I’ve observed previously, the company’s position as the most exciting ballet company in New York is a precarious one, and one that depends in large part not only on the quality of its dancers, but on the opportunities provided to its younger dancers to grow. Since Peter Martins’s departure, and for whatever reason, those opportunities appear to have significantly diminished. An example is this year’s Dream: of the seven performances, there were no debuts as Titania or for the ballerina in the Act II pas de deux, and those newest in the roles (Lovette in the pas de deux, and Miriam Miller as Titania) were given one performance each: the rest were divided among more senior dancers. The same was true of the past Winter season’s casting for The Sleeping Beauty.

Make no mistake: these “senior” dancers are by no means beyond their prime (on the contrary, in the overall scheme of things, most are relatively new principals, and few can be considered unworthy of the roles they’ve been given), and all are capable of delivering superlative performances. That’s not the issue. A balance is necessary to keep the company growing, to insure its future, and to avoid a sense of same-old same-old stodginess. As the company’s new leadership becomes more secure, I trust that NYCB’s excitement will return. And at the very least, returning next Spring will be another week of A Midsummer Night’s Dream.