New York City Ballet completed its Spring 2016 season with some additional debuts in featured roles in repertory staples, concluding with a week of George Balanchine’s A Midsummer Night’s Dream. I saw three of these programs, including Sunday’s final season’s performance.

Forget April showers, May flowers, and June heatwaves. There is no more welcome sign of spring than A Midsummer Night’s Dream. It’s fun, it’s magical, and it has some wonderful choreography. And when you have a bevy of performances as fine as on Sunday’s closing matinee, it magnifies the enjoyment. If the company left the theater as high as the audience appeared to, it may not need to spend money on airfare for its upcoming tour to Paris.

I don’t usually like going to matinees, but a Sunday Dream matinee is different. The audience is still filled with viewers who don’t often attend ballet performances, but the kids are a little older than, say, Nutcracker matinees, the adults a little younger, and any lack of knowledge is overwhelmed by the response to Balanchine’s (and the NYCB dancers’) mastery of comedic choreography and timing. And when Act II (Balanchine’s tacked-on invention to pump up the ballet part of the ballet) begins, and the always exemplary NYCB Orchestra plays Mendelssohn’s Wedding March, you can hear the audience murmuring under their collective breaths: “…so that’s where it comes from.” If I could take someone to a ballet who’d never seen one before and thought ballet was too highfalutin an art form, Dream would be my choice. 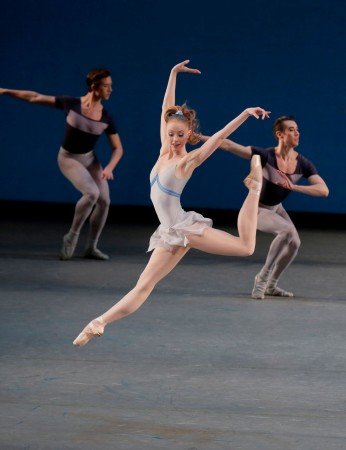 There are missing links throughout: for example, Balanchine leaves out the beginning of Shakespeare’s play, so knowledge of how the mixed up lovers got into the woods is non-existent, at least in the ballet. Similarly, who the boy who Titania and Oberon are fighting over, and the reason for it, is not clear, which is more problematic to someone who doesn’t just accept what’s happening onstage at face value. But even with these narrative holes, the ballet succeeds as a narrative whole and feels complete. More importantly, it makes viewers smile.

And Sunday’s performances would have accomplished that even if the ballet’s choreography and staging itself didn’t guarantee a successful viewing afternoon. Sara Mearns’s Titania recovered from early “Odette-ism” (Titania should be angry, or at least deeply thinking, when Oberon confronts her – but not sorrowful) to deliver a sparkling, exhilarating performance from that point forward. Her Oberon, Gonzalo Garcia, fully communicated the aura of a god, but was less macho doing so than others I’ve seen in the role, which was refreshing. One hears frequently about the company’s promising corps ballerinas, since they’re so abundant, but less of its promising corps male dancers. Harrison Ball is one of them, and his Puck was masterfully done. I’ve usually seen Puck danced by shorter dancers with an abundance of compact speed and charm, but Ball somehow made himself look smaller than he is – which here made his performance, his second in the role (he debuted on Monday), both different and every bit as fully formed, and funny, as others. And the lovers: Abi Stafford and Jared Angle (Hermia and Lysander), and Lauren King and Amar Ramasar (Helena and Demetrius), were fabulous foils. In her role debut, Alexa Maxwell, who I’ve previously recognized for her high energy spunk, danced a bubbly Butterfly, and in one of her best performances in the role, Savannah Lowery was a commanding Hippolyta.

The highlight of the performance, however, were the debuts of Lauren Lovette and Chase Finlay in the Act II Divertissement. The Pas de Deux is an antidote of sorts to the humor of Act I: it’s serious, warm, and somewhat reverential – befitting the depth and solemnity of the commitment of the three couples. And it’s also glorious to watch unfold. Lovette and Finlay did what has to be done to make this pas de deux work – it looked not just complex and beautifully simple, and serious and sweet at the same time, but exquisitely meaningful.

The prior week brought additional debuts, with Rebecca Krohn doing classy work in her lead role debut in Serenade. The cast included Russell Janzen in his role debut, Erica Pereira (whom I have not had occasion to see much this season), Teresa Reichlen, and Adrian Danchig-Waring. Pereira and Reichlen, stage opposites (one short and effervescent; the other tall and regal) except in the competence of their execution, delivered particularly noteworthy performances. 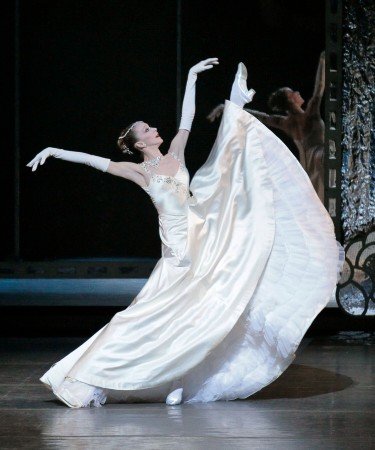 Also in a role debut, Lovette, opposite Anthony Huxley, appeared in Duo Concertant. This was the rare debut where Lovette was a bit off, perhaps reflecting a lack of familiarity with critical lighting marks which must be hit perfectly, in darkness, or a lack of rehearsal time. Regardless of the cause, the timing issues marred the performance – as did what I saw as a lack of connection between them – all of which made the piece, one of my favorites, look less visually dramatic, and less romantic, than usual.

Choreographed to a 1996 composition of the same name by John Adams, Hallelujah Junction is a Martins black and white ballet that takes its inspiration from the interlocking music emanating from two pianos positioned above and to the rear of the action, and performed live, with the pianos and pianists partially hidden from view. Led by a principal couple in white and a third, male, dancer in black, they are joined by four women (in black) and four men (in white) who eventually pair up and surround the leads, at times reflecting their movements and at times moving independently. The beauty of the piece is the varied movement quality – slow, fast, jazzy, explosive. Sterling Hyltin and Amar Ramasar led with a fabulously nuanced performance, Andrew Veyette danced the male solo, and the four corps pairs (Sara Adams and Devin Alberda, Emilie Gerrity and Daniel Applebaum, Indiana Woodward and Joseph Gordon, and Kristen Segin and Ball) helped make the lightning-fast piece less cold than it often is.

The evening closed with Balanchine’s Western Symphony, an audience-pleasing tribute to the style and spirit of the American West. In her role debut, King (who’s had a breakthrough season) and Finlay danced a rollicking Allegro, and Brittany Pollack (in the Adagio, partnered by Jared Angle), and Mearns (in the Rondo, partnered by Zachary Catazaro) executed crisply and with particular vivacity.

The week earlier, an all-Balanchine program included additional debuts in established repertory pieces. In the magnificent Ballo della Regina, Huxley, in his role debut, did his usual crystalline work opposite Megan Fairchild in the lead roles, and Reichlen danced a glorious Kammermusik No. 2, particularly in contrast to Mearns, whose dancing in this piece was an obvious struggle. Compared to Reichlen, who handled the fast-paced, angular choreography easily, Mearns looked uneasy with the choreography, and uncharacteristically unkempt. 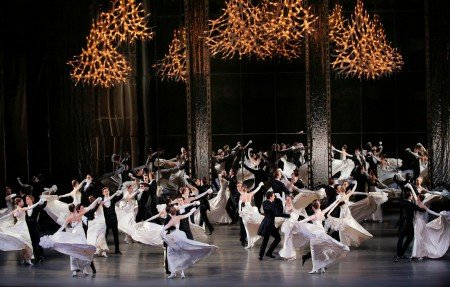 The evening concluded with several role debuts in Vienna Waltzes, Balanchine’s homage to Imperial Vienna and to the waltz form. Comprised of five waltzes lavishly choreographed to familiar compositions by Johann Strauss II, Franz Lehar, and Richard Strauss, the piece comes across as a sumptuous visual feast of a ballet created from a little schmaltz, a little schnapps, and a little sacher torte with whipped cream and Viennese coffee. It’s a complex, inventive, and stunningly romantic work of art that never allows itself to get too sweet or syrupy. It goes on a bit long, but the final segment is so visually magnificent, the stage filled with swirling dancers in a grand, mirrored ballroom costumed in identical white gowns (black tuxes for the men), that it’s worth waiting for. Rouben Ter-Arutunian’s sets, and Karinska’s costumes (her last for the company), are as magnificent today as on the night the piece premiered in 1977.

Hyltin was delightfully vibrant and effervescent in the light-footed and fast-paced Fruhlingsstimmen section, as was Georgina Pazcoguin and Stanley in Explosions Polka. Lovette and Finlay, in role debuts, led a classy and sophisticated Gold Und Silber Walzer, and in Erste Walzerfolge from Der Rosenkavalier Maria Kowroski returned to the company for the first time after her pregnancy showing no loss of quality or class. Lowery, who I initially thought was miscast in the dream-like Wienerald segment that opened the piece, did a fine job portraying the sweetly romantic young lover, as did Janzen, her ardent suitor, in his role debut. Indeed, the entire cast – which included Gonzalo Garcia opposite Hyltin, and Ramasar partnering Kowroski, as well as the corps dancers who filled the stage with elegance – delivered a matchless visual experience.

One final note: Craig Hall, long a stalwart, reliable, and refined partner, retired toward the end of the season following a lengthy and noteworthy dancing career with the company. His presence will be missed not only by NYCB audiences, but by the ballerinas who his consideration and patience helped nurture.