After an initial focus in its Fall 2018 Season on Balanchine and his collaborations with Stravinsky and Tchaikovsky, New York City Ballet switched gears and presented a program of contemporary ballet. Called “New Combinations,” the program opened with William Forsythe’s Herman Schmerman, and closed with Kyle Abraham’s The Runaway, last season’s runaway hit. In between was a new ballet by Justin Peck. 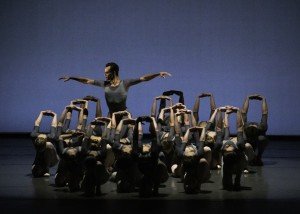 Titled Principia, and using a commissioned score by Peck’s frequent collaborator Sufjan Stevens, the piece started out as a winner, choreographed to one of Peck’s undeniable strengths – his ability to display and manipulate a stage full of dancers in constantly interesting ways. In recent years, Peck has focused more on smaller casts and/or large groups of dancers in a piece with a more unifying focus (e.g., Belles-Lettres, Rodeo – Four Dance Episodes, Pulcinella Variations, The Times Are Racing). There have been exceptions (like Everywhere We Go), but a return to the Peck who exploded onto the ballet choreographic scene with his Year of the Rabbit in 2012 (also to a Stevens composition) has been long awaited.

Peck truly works magic with his stagecraft. There are twenty-four dancers in Principia: six featured dancers (3 male/3 female), three demi-soloists (all female), and a corps of fifteen (6 male, 9 female) – and all seemed to be onstage in a jumble as the curtain rose. Faster than you can say George Balanchine, the “jumble” reassembled into a recognizable form, subdivided, and dancers exited the stage and reentered in unconventional ways. Already feeling giddy, I sat back in my seat and relaxed. 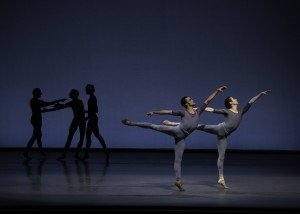 As the piece progressed, the connection between the Peck of Year of the Rabbit and the Peck of Principia became increasingly apparent. Peck’s clever manipulation of dancers who appear seemingly out of nowhere and just as suddenly disappear, his clever choreography for pairs and groups and mostly for the entire cast as a living corporeal whole, and his clever response to Stevens’s music, were all there. I couldn’t see any rhyme or reason to it, but it was difficult to discern that in Year of the Rabbit too, and not having a particular meaning isn’t necessary. It just was very fine choreography and execution to an equally fine score.

And then something happened: I began getting tired of the visual themes that repeatedly recur in slightly different forms, including the over-use of what I describe as “smokestacks” of dancers scattered about the stage from which one or another featured dancer eventually emerges. [Think of the scattered “groups” of swans in the second White Act of Swan Lake (the “standard” Petipa-based version), where Siegfried touches each group of swans before finding the one within which Odette hid.] It’s clever at the beginning, but it happens too often, and in the dance’s context goes on too long. And, notwithstanding very fine choreography that’s distinguishable from solo to solo and pair to pair and group to group, I tired of trying to see any relationship at all among the featured dancers, who seemed to repeatedly change partners. And eventually I tired of Principia. 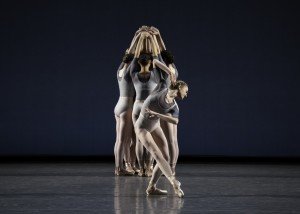 The costumes, by the estimable Reid Bartelme and Harriet Jung, are two shades of grey (one for the tops, another on the bottoms), and they’re both nondescript and dull. I’m reasonably certain that this is what Peck wanted – something that wouldn’t detract from the purity of the choreography. And it goes without saying that there’s nothing resembling a set. So maybe this is simply a Peck “black and white” ballet where grey is the new black, memorable for its cleverness, speed and abstract patterns, but not much else.

I’ll withhold final judgment until I see Principia a few more times, and maybe find connections and coherence I missed on first view that might make it appear less overly long than it now does. And perhaps I’ll also find a meaning to the dance (and the score’s) title. There doesn’t have to be one, but with a word that specific, and given Peck’s admirable propensity for selecting titles for a reason, difficult as that reason may be to discern, maybe it’s there. “Principia,” in Latin, means (loosely) “fundamental  principles.” Maybe there are choreographic principles here that I missed. Or perhaps some connection to Isaac Newton’s three volume study on the laws of motion and universal gravitation – Philosophiæ Naturalis Principia Mathematica – which I tried to find in the piece, but it all seemed too diffuse.

Be that as it may, although the piece may ultimately have been disappointing on first view, the execution by the featured dancers [Peck (Tiler), Claire Kretzschmar, Brittany Pollack, Daniel Applebaum, Taylor Stanley, and Harrison Coll] as well as by the rest of the effervescent cast, was exemplary. 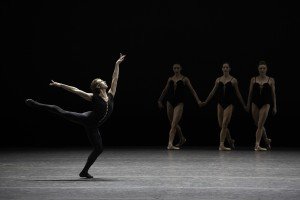 Herman Schmerman premiered with NYCB in 1992 (I suppose the “New” in “New Combinations” is relative) as part of that year’s Diamond Project. This was the first time that the piece has been presented in its complete form in over two decades.

To a commissioned score by Thom Willems, Forsythe’s frequent collaborator, Herman Schmerman contains two distinct parts: the first, danced by three women and two men; the second, a pas de deux for one man and one woman. There’s no connection between the two beyond the relatively annoying electronic score (less so in the second part); even the choreography looks different beyond the given difference between a group and a pair. Maybe that’s how the ballet (and score) got its name – two words that, when put together, make no sense but sound like they fit each other. I’ll call the first part “Herman,” and the second part “Schmerman.” 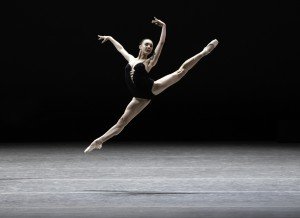 Forsythe is on record as saying that the dance means nothing, and the title means nothing, being derived from a Steve Martin film, Dead Men Don’t Wear Plaid. He’s certainly right with respect to Herman.

When Herman premiered, the movement quality might have looked new and distinctive, but now it not only doesn’t look particularly “new,” after a brief period of time the movement quality for both the men and the women looks much too similar: too much of arms held horizontally as the body moves; too many jumps; too bound to the score’s electronic percussive points; too derivative (at times I saw flashes of Balanchine’s Agon), and too much of the dancers simply walking off stage after completing a series of phrases. Parts of it work well on a moment to moment basis, but overall the movement frequently looks forced, and the viewing appearance is flat. Perhaps that’s why the Herman component of Herman Schmerman has not been performed since 1994. The dancers – Sara Mearns, Unity Phelan, Harrison Ball, Joseph Gordon – executed superbly, and the fifth dancer, Naomi Corti, merits special accolades for assuming the assignment apparently on late notice and not only delivering the choreography, but looking like she “fit” together with her much more experienced colleagues. Each debuted in their roles earlier in the week. 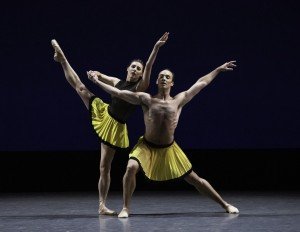 I disagree with Forsythe’s characterization as it applies to the piece’s second component, which, according to the program note, was added to the first in 1993. Schmerman may not have a narrative, but it definitely has a loose theme of sorts – a low-decibel and good-natured “battle of the sexes,” and an at times subtle and at other times broadly-painted sense of humor, both of which are absent in Herman. And while Schmerman may also be seen as poking fun at ballet “relationship” dances that have no real point, its approach is so likeable that that component is virtually invisible. Tiler Peck and Tyler Angle (a casting that has a sense of humor of its own), who also debuted in their roles earlier in the week, added a sense of refinement amid the humor that took Schmerman to an even higher level. 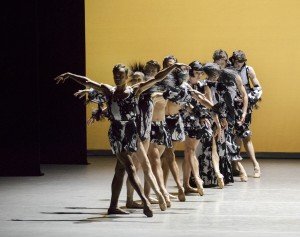 The evening ended with Kyle Abraham’s The Runaway, which premiered last Fall. In my subsequent review, after initially disliking it intensely, I ended up raving about it and selecting it as one of the Tops in NY dance in 2018. If anything, a third view solidifies that opinion. Except for the accompanying music (which I see as being selected for a distinct thematic purpose rather than to break barriers), it’s an extraordinary and powerful piece of work on multiple levels, including Abraham’s magnificently conceived choreography, which fits and enhances what I see as the dance’s theme (the piece isn’t titled The Runaway for nothing), and which includes pyrotechnics of a type and at a level not evident in any other ballet. It’s definitely a ballet of a different color. 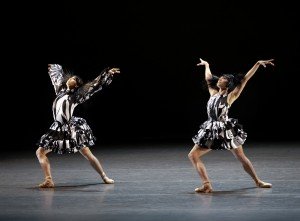 I feared that audiences would swarm to see The Runaway for all the wrong reasons, and this appears to be the case (for example, I overheard many people laughing their way through much of it, whenever an outrageous costume or song made an appearance, while I see none of it as in any way humorous). But, from my vantage point, the Sunday afternoon house was full, and I don’t doubt that this was a consequence of The Runaway being on the program. And following its conclusion, instead of what I’ve previously described as the usual NYCB audience “sitting ovation,” the house erupted into a standing ovation the like of which is usually reserved, if it’s seen at the DHK Theater at all, for full-length ballets.

It may be for all the wrong reasons, but it’s most welcome. Whatever it takes.