I always look forward to seeing the New York City Ballet (NYCB) in Washington, DC. The company’s opening night program was rewarding in every way — exactly what an evening of ballet should be.

Balanchine’s Square Dance is a ballet-lover’s dream, and NYCB did not disappoint in its delivery. In pale ice blue costumes the women looked more like figure skaters than square dancers — no gingham, no bright colors, no wide flouncy skirts. But suspend disbelief a little, and then the partnering does resemble square dancing a bit, although the piece is more about evoking the spirit of square dancing than anything literal:  like a softer storybook version of its inspiration — gentle but also with remarkable strength. Obviously the music by Arcangelo Corelli and Antonio Vivaldi doesn’t approximate square dancing, either. No matter, the clean geometry and light-hearted pep are utterly engaging. Square dancing and Balanchine’s ballet share an almost coquettish and regal approach. I’d rather see Balanchine’s square dancing any day, though.

Square Dance has more restraint and composure than a country hoe down at a local dance hall, but the breakout jumps and leaps capture the vibrancy of such an event. In particular, Chase Finlay, in the lead male role, was heart stoppingly gorgeous. Just watching him move his arms was transporting. 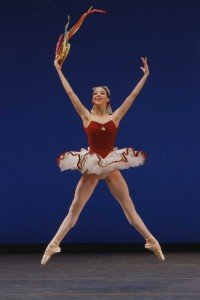 Balanchine’s Tarantella followed, and it’s a spectacular hors d’oeuvre. Flirty and fun, the audience ate up the stunning performances of Erica Pereira and Spartak Hoxha. I’m not expert at folk dances like tarantella, but I assume, again, that Balanchine embellished considerably on the original. Early in the piece, Hoxha leapt with his back arched so that his elbow struck his heel. Suddenly, jingling mini cymbals off his tambourine went flying and hit the floor. The dancing was off to an energetic start! Tarantella made a nice contrast to Square Dance — it’s showy but brief, and tinged with humor.

I had read some reviews of Alexei Ratmansky’s Odessa, which premiered on May 4, 2017, before seeing it. There was some controversy about whether part of the work comes across as a rape scene. I can happily report that although I immediately recognized what part of the work was controversial, the choreography did not strike me as depicting a rape. True, there’s a female dancer being tossed in the air by a group of men, and she’s manhandled and manipulated, but somehow I read the dancing less literally — as tension and tragic memories. 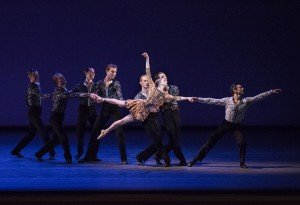 What’s most impressive about Odessa to me is the shifting complex moods. It’s dark, but mottled with light, like the costumes for the lead females (Ashley Bouder, Sterling Hyltin, and Sara Mearns), which look like swirling sunlight through leaves, but in different colors — shades of greens, oranges, and purples (costumes by Keso Dekker). The chorus of dancers often at the back of the stage wore much darker colors — black and graphite and deep red predominated. They were dressed like underworld jazz club patrons, which makes some sense given that the program notes say the ballet is based on tales of Jewish gangsters in Odessa after the Russian Revolution.

The chorus acted as echoes at times, and the relationships of the lead couples were mirrored in the larger group. I felt that this larger group was menacing to some extent, and the leads exuded both anger and sadness. The number of dancers consistently shifted, and the music sometimes loudly interrupted. Duets occurred in the middle of a crowded ensemble. The movement was quite busy, but clear and intriguing. 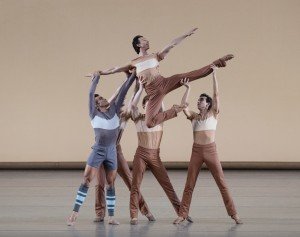 Some sort of psychological trauma seemed to be playing out. Characters were broken. A female head rested on a man’s shoulder more than once. A female dancer was grabbed by the thighs as she leaned deeply forward. Even without understanding the narrative, I understood there was pain.

The program closed with Justin Peck’s Rodeo: Four Dance Episodes. This is the first work of Peck’s I’ve really liked. I was beginning to wonder why with so many glowing reviews, I hadn’t yet recognized his level of talent. But Peck finally won me over with Rodeo. It got off to a running start, literally, with male dancers dashing from invisible racing blocks in the wings. They looked like athletes from a bygone era, each with a broad stripe of contrasting color across their chests. Aaron Copland’s music is soaring, iconic, and bold, and Peck’s choreography held up to it. The choreography is sporty and musical. Dancers slapped their thighs. Yet there were quiet moments as well. 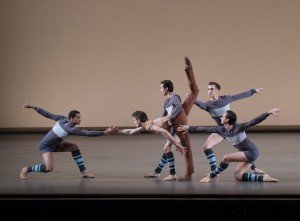 Peck appeared as the lead in Rodeo. He looked assured in his own movement. Tiler Peck, in a crimson top over gray, joined him, and added immediate brightness. She definitely made her partner Peck look better.

Rodeo is likeable, fun, and creative, and isn’t over-thought. Most of it eschews cliches and charms with a simple cowboy-like earnestness. I especially enjoyed the 2nd Episode, in which five male dancers (Devin Alberda, Daniel Applebaum, Preston Chamblee, Andrew Scordato, and Taylor Stanley) dazzled.