NYCB’s second program in Washington, D.C., began with Christopher Wheeldon’s new American Rhapsody. The set (scenic design by Leslie Sardinias) consists of a vast painted backdrop that is modern and groovy. Greens turn in a circular sort of pattern and golden dots pebble the design like stars. The costumes by Janie Taylor are iris blue for the corps dancers. The women wore skirts tinged with pink and red. The two female leads, Lauren Lovette and Unity Phelan, well paired, wore a pale almost lavender variant. Gershwin’s symphonic version of Rhapsody in Blue provided the accompaniment. The feeling was just short of patriotic.

Unfortunately, I could discern no passion on the part of the dancers or in the choreography itself. Despite the powerful music, the ballet seemed slapped together, like a series of plotted motions with no reason for stringing them together. Frequently there were piles of people, arms joined, legs hiked up, backs bent over, making lines and shapes, almost like they were trying to spell out a phrase. This was only mildly interesting. 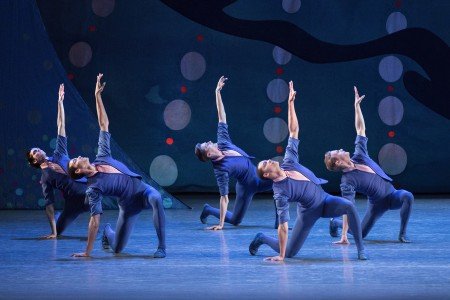 At times, the dancers moved like they were social dancing, with a bunch of extensions thrown in. At times, a group would rise from the ground, or move downward, like keys of a piano lifting and being pressed. Yet American Rhapsody just didn’t speak to me.

The Four Temperaments is a masterwork of Balanchine, and although I’ve seen it performed better, it’s always a pleasure to watch. Only one dancer truly stood out to me this time, and that was Teresa Reichlen, who completely lit up the stage in the Choleric variation. Her entrance was very much like a dim room suddenly brightened by a candle. She was sharp, intense, and emotional. 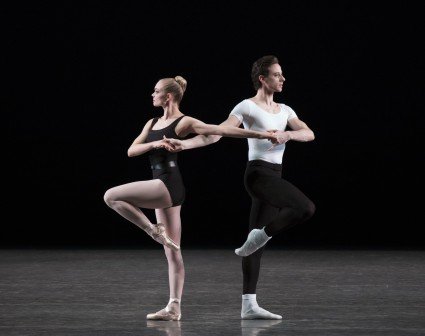 Overall, the cast looked young, and the plain attire contributed to the youthful look. The choreography is lovely, but this time around I wasn’t especially roused, except for Reichlen, although a few sparks were launched by Ashley Laracey in the Theme and later Gonzalo Garcia, in his graceful exit, in the Melancholic variation.

The program closed with Justin Peck’s The Times Are Racing. Again, as with the opening night program, I found myself liking Peck’s choreography. I may be a late convert. And again, like on opening night, Peck appeared in his own piece, although he seemed to be a last minute replacement for Ashly Isaacs. If he wants my advice, I’d tell Peck to concentrate on choreography rather than on his career as a dancer. His choreography, in my opinion, is more compelling and holds more promise than his dancing. 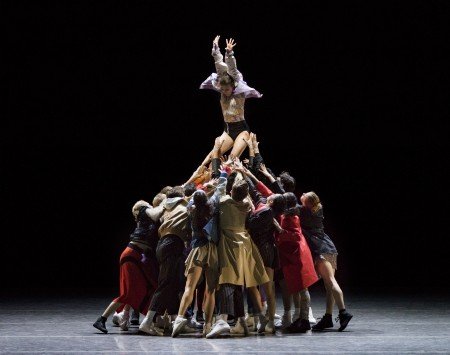 The Times Are Racing has huddles that grow and shrink in syncopation from within which single dancers emerge, a face popping up from the middle of the crowd. In the beginning I thought the dancers were maybe homeless people, or a gathering of immigrants. The costumes by Humberto Leon feature long coats in multiple colors. Something about the coats signaled humanity as a whole, but then underneath there were cut off jean shorts and sleeveless t-shirt and white shoes and socks, more like a collection of people you’d pass on a sidewalk on a warm day.

The music by Dan Deacon was a little grating — electronic and loud, reminding me of the way my ears buzz after a noisy rock concert. And the dancing definitely veered more toward hip hop, tap, and contemporary dance and less toward classical ballet. Here, the dancers appeared to be having a grand time, and their energy passed to the audience. I was able to tune out the music and watch the dancing, which in the midst of robotic pulses and beeps seemed rather  dreamlike. Arms went up and over, fast and smooth, like swimming strokes, but more complex. The music and choreography have repetitive elements that work. The undercurrent of joy running through the dancing was infectious.