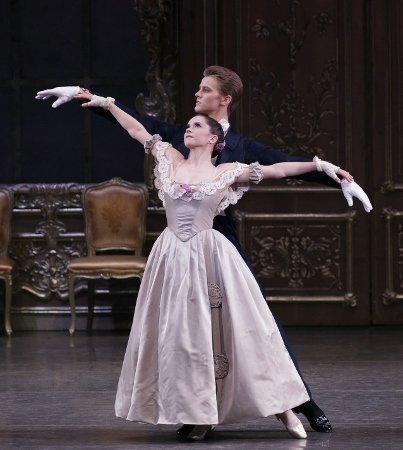 As one of the foremost ballet companies in the world, and home to a host of spectacular dancers, New York City Ballet is known for its athletic and contemporary style. Showcasing the company’s versatility this evening are two very different, complex pieces, juxtaposed to highlight the dancers’ mastery of neo-classical styles.

Liebeslieder Walzer, choreographed by Balanchine in 1960, lulls with its sweeping waltzes and lush lifts. Four couples traverse the stage in hypnotic circles, moving like clouds across the space while four singers and two piano players accompany them from the downstage corner. Dressed in period ballroom costumes of mid-19th century Vienna, the women float their upper bodies like water as the men dip and arc them to the soulful music of Brahms. In the first section, set to Opus 52, the dancers partner together as if they are one person – seamless and organic. The emotional connection between the dancers is as rich as the music – each note is fulfilled in the simplest touch and gesture.

Paramount to the palpable connection between the dancers is their sustained eye contact and sense of touch – the way they touch each other is remarkable, like the secrets of the universe are being revealed on the surface of their skin. Even the way they ‘touch’ the air, part and caress it is sensual and purposeful. All eight dancers are masters of their craft and speak their souls in distinct ways, but of special note are Tiler Peck and Amar Ramasar. Ramasar is the perfect prince – regal, commanding but never domineering, dancing with a mature elegance that stands out for its understated power. Peck is a force of nature. When she moves slowly she is wafting smoke. When she moves quickly, she is a crisp, sharp diamond.

After a brief lowering of the curtain, the dancers return having changed from their ball gowns and dancing slippers into tulle ballet dresses and pointe shoes. Set to Opus 65, the second section is more theatrical than the intimate first section. Where the first soothes with softness and elegant grace, the second surprises with dazzling speed and intricacy – a hallmark of Balanchine’s choreography. Sweeping waltzes increase in drama, vibrancy and intensity, becoming more passionate as they echo the change in music. A true feast for the senses, Liebeslieder Walzer delights the eye with gorgeous, shimmering costumes, breathtaking dancing and emotionally rich partnering. It pleases the ear with angelic voices and beautiful piano accompaniment.

Balanchine is known for his famous quote “ballet is woman,” and upon first glance, one could assume that the male dancers are mere decoration for the obviously more prominent women – functional as partners to lift, spin and support them. But with a deeper look, it is clear that the men are an integral component in the emotional force of the piece. Given no virtuosic variations of their own, their dramatic power comes from their intent and connection with their female partners and the maturity each dancer brings to their role.

Following the formality of Liebeslieder Walzer, Glass Pieces choreographed by Jerome Robbins in 1983, opens on a stark white empty stage with what looks like graph paper lighting the back wall.  Incorporating postmodern dance concepts expertly with traditional ballet vocabulary, the work has an urban, although obviously dated, energy. The repeating movement patterns in the piece – one dancer after another entering and walking purposefully around the stage, increasing in number and tempo until a kaleidoscope of brightly colored bodies punctuate the space with short bursts of dance movement – mimic the recurrent rhythms in Philip Glass’ music. The relentless, driving energy and labyrinth of shifting patterns that increase in speed and clarity again mirror the driving momentum of the music. All the theatrical elements of Glass Pieces synthesize to create a physical framework for the musical composition, a symbiotic, brilliant artistic experience.

Sara Mearns in the second section is sinuous perfection. Partnered by Adrian Danchig-Waring and set against a backdrop of corps de ballet in silhouette, Mearns sculpts the air with serpentine power. Also exciting is the sextet of males in the third section. West-Side-Story-like variations and explosive traveling jumps give male dancing more of a prominent role than in the previous ballet of the evening.

Always thrilling and beautiful, the New York City Ballet looks sharp and vibrant, and the evening was one of contrasting beauties in a company of brilliant gems.