And the post-pandemic honeymoon continues.

Following its glorious reopening performance on September 21, New York City Ballet segued somewhat seamlessly into its Fall 2021 season. The programs on the afternoon and evening of September 25 exemplify the renewed vigor that the company and its audiences are demonstrating after the long pandemic hiatus, and they provided the opportunity for me to reevaluate dances that I’d previously seen and to see one world premiere.

Mauro Bigonzetti has choreographed five pieces for NYCB. Of those I’ve seen, the one that premiered Saturday evening is the most focused, and the most successful. Its title, AMARIA, says it all: it’s a mashup of “Maria” and “Amar,” as well as a dedication to Kowroski, who is retiring at the end of this season (A Maria – to Maria). I usually don’t appreciate titles that shout, but here it’s fully justified. 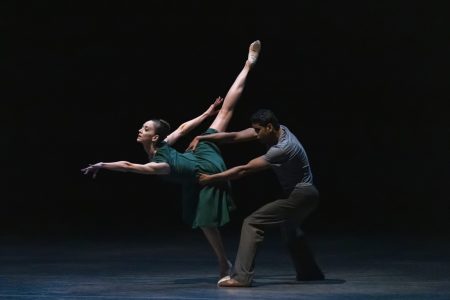 AMARIA is a brief pas de deux to piano pieces by Domenico Scarlatti (Sonata in A Major, K.208; and Sonata in D Minor (Aria), K.32). It’s not pretty, but it’s not intended to be. Created for Kowroski, who has originated principal roles in each of Bigonzetti’s prior NYCB dances, this duet is excruciatingly beautiful as Kowroski struggles to leave (the relationship; her career) even though she doesn’t want to, and Ramasar tries to pull her back even though he knows his effort is futile. Performed barefoot (as in ‘the toe shoes are coming off’), Kowroski and Ramasar tear into each other as much as they try to break away from each other. Their individual and collective agony is both devastating and transcendent.

It’s tempting to compare this pas de deux to the central pas de deux in Balanchine’s Agon, but except for the complex partnering, they’re very different. The Agon pas de deux is angular and mechanically emotionless; AMARIA presents considerable angularity as well, but here it’s not a stylistic exercise (superb as that Agon pas de deux is). Here the angularity, delivered fluidly rather than as a series of exclamations, reflects the human anguish behind the steps and lifts.

Kowroski danced with typical brilliance and unusual passion. If nothing else, her performance demonstrates that she’s leaving while still at the top of her game. Ramasar, who has announced that he’ll be leaving NYCB in May 2022, is as well. Years ago I wrote that Ramasar was one of the most underrated of NYCB danseurs. Not anymore. His partnering here, as it always has been, was exceptional, and NYCB audiences now recognize this. Both were saluted with a crescendo of cheers and applause when the dance ended. 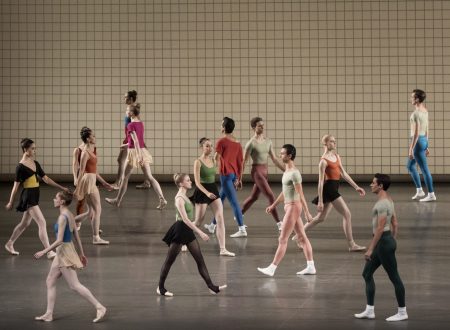 After first seeing Peck’s Pulcinella Variations at its premiere four years ago, I appreciated what Peck did, but the fact that it was so different from other Peck pieces, so much more dated and classical-looking, made me less enthusiastic than usual – and obviously took the 2017 Fall Gala audience, which, by premiere standards, was relatively subdued, by surprise. Seeing it again, however, has made me (as well as Saturday afternoon’s audience) far more receptive to it. I appreciate more now what Peck was doing, but more than that, I enjoyed watching it.

The dance is deceptively simple: variations on the theme of “pulcinella,” set to Stravinsky’s Pulcinella Suite. But as choreographed, and abetted by the inspired costumes designed by Tsumori Chisato that are different for each dancer and that present a riot of color and form while remaining well within the pulcinella theme, the piece gives unique personalities to each of the nine pulcinellas, much like the fairies in The Sleeping Beauty but far more fun to watch. 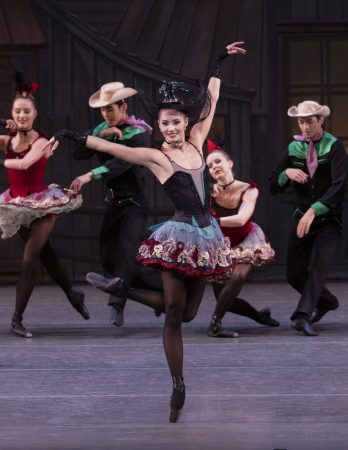 In addition to the merits of Peck’s choreography, the cast, which included several role debuts, seemed far more comfortable with it than did the original cast at its premiere. Von Enck, costumed in yellow, was The Sleeping  Beauty’s “Fairy of Songbirds” (aka the ”Canary Fairy,” or the “canari qui chante”) updated as a hyperactive pulcinella fairy whose nimble complex solo variation to the third (IIIb – Allegretto) movement of Stravinsky’s piece was both energizing and delightful. It was a marvelous role debut.

Also in a role debut, KJ Takahashi, another member of the corps, was a jester pulcinella-in-a-box, delivering non-stop but varied leaps and jumps to the piece’s fourth (IV – Tarentella) movement. And in another role debut, Soloist Sara Adams, shined throughout the piece, particularly in her solo to the third variation (IIIa – Scherzo). Ashley Hod, another member of the corps (but not in a role debut) and back from a lengthy period of injury recovery, also excelled in her solo variation (IIIc – Andantino).

Highlighting these dancers as I have is not intended to render other dancers’ performances less than delightful. On the contrary, the piece received vibrant and engaging performances from its entire cast: Miriam Miller and Chun Wai Chan (another role debut) elegantly executed the opening (II  Serenata) variation; Daniel Appelbaum did the same in his variation to the fifth (Toccata) movement, and Unity Phelan and Gonzalo Garcia added pulcinella panache to their pas de deux (to the piece’s sixth movement (Gavotta con due variazioni). 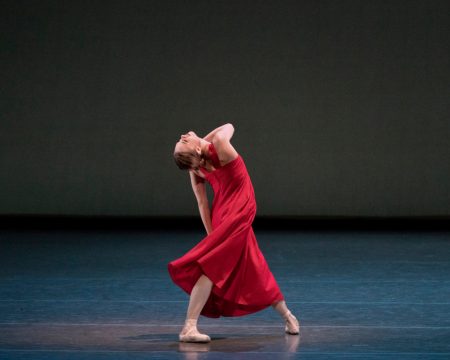 I’ve previously expressed high praise for Ratmansky’s Russian Seasons, and Saturday evening’s performance, the last on that program, solidified it. The dance, to a score by Leonid Desyatnikov taken from traditional music of Russia’s Lake District (in Russia’s northwest, almost at the border with Belarus) is a wonderfully understated tapestry of emotions that roughly corresponds to quarterly rituals of the Russian Orthodox Church.

The cast as a whole provided the nuances of character and passions that the piece requires, but several were particularly outstanding. Laracey, as I mentioned above, lit up the stage with a multi-faceted portrayal of a multi-faceted array of characters, running the gamut from firefly to soul explorer to waif. Her performance was a memorable return to the stage after a lengthy absence – and that it was also a role debut was icing on the cake. Also delivering a superlative performance was corps member Alexa Maxwell’s part funny and always fine take on her character(s), Sara Mearns’s expressions of tragic loss, Sterling Hyltin’s bubbly, but later bemused, bride (her role debut), and Taylor Stanley’s heartfelt groom. Completing the superb cast were Indiana Woodward, Andrew Veyette, Sebastian Villarini-Velez, and, all in role debuts, Joseph Gordon, Andres Zuniga, Jonathan Fahoury, and Laine Habony.

Saturday afternoon’s program closed, and Saturday evening’s program opened, with dances by Jerome Robbins. The former, Glass Pieces, had not been one of my favorite Robbins pieces. On previous viewings I admired its craft, but to my eye it was too urban anomie-ish, and too much a study of how to choreograph to the pulsing repetitiveness of music Philip Glass. Maybe I’ve mellowed with age, but I now see it as one of Robbins’s must-see dances.

To a score taken from three Glass compositions, here Robbins weaves as much of a tapestry as Ratmansky did in Russian Seasons, and almost as ritualistic (in a secular way), but thoroughly late-20th Century contemporary. And the way in which Robbins captures the interplay of rhythm and melody within Glass’s mesmerizing musical structure is visually marvelous. I intensely disliked its matter-of-fact ending (the music just stops) when I first saw it, but now – well, in the ambiance of swarming solitude that Glass and Robbins create, that shouldn’t be so unexpected.

The exceptional cast, seemingly of thousands (actually 43, including several who are new to the company or are apprentices), was led by Principals Teresa Reichlen and Russell Janzen, who executed the dance’s central pas de deux as, appropriately, glass pieces that might cut if they let themselves get too close. 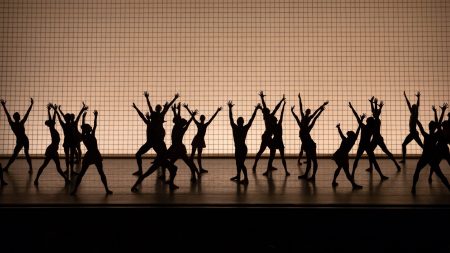 The Robbins piece that opened the evening’s program was Opus 19 / The Dreamer. I vividly recall seeing this prior to the pandemic, with the leads performed by Hyltin and Garcia. This time, the leads were Tiler Peck and Garcia. While the dance is the same, the difference in cast made quite a different impression. As Garcia’s dream / vision / ideal, Hyltin was remarkably ethereal. Peck’s was more grounded, more earthly. Notwithstanding the different impressions, both are valid expressions of the protagonist’s dream. And the Dreamer, in a role originated by Mikhail Baryshnikov, Garcia once again made the Dreamer and his quest convincing. 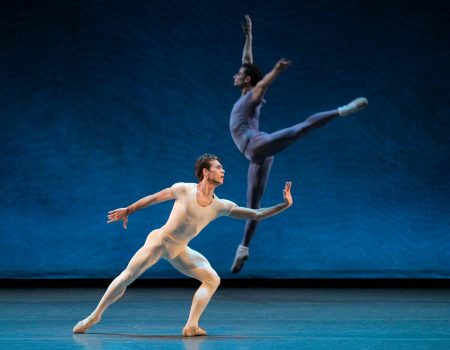 As was the case when NYCB reopened its season, Saturday afternoon’s program opened with Serenade, albeit with a different cast. I won’t repeat what I wrote about this miraculous piece previously, and its impact is the same regardless of its cast. At this performance the dance featured Mearns (the “waltz girl”), Megan Fairchild (the “jumping girl”), Emilie Gerrity, Preston Chamblee, and Ask la Cour. I initially felt that Mearns was miscast here – she just didn’t look “right” to me: way too solid and way too gloomy, and the nuances that Hyltin had delivered four days earlier were completely absent. But as the piece progressed, some of that sense abated, and she was marvelous in the final image, with a backbend every bit as deep and meaningful as Hyltin’s. Fairchild was spot on in her role. Not only did she execute flawlessly, she added a beaming personality that was absent from the piece four days earlier, and which fit the role splendidly.

At the conclusion of the afternoon’s program, the audience rose to another rare NYCB standing ovation. The conclusion of the evening’s program was received with a more typical (for a NYCB audience) sitting ovation. Either way, both audiences, and both performances, solidify the sense that absence makes the heart grow fonder, and that maybe the pandemic, in hindsight (or, given the current Covid situation, in partial hindsight) made audiences and dancers recognize that what was lost is invaluable, and that they need each other to make their spirits soar.