February 2, 2017
Fearful Symmetries, The Shimmering Asphalt, The Times Are Racing

Unlike audiences for ballet companies that primarily present full length pieces featuring performances by one or two lead dancers, whose routine standing ovations at times appear de rigueur and forced, audiences at New York City Ballet performances rarely provide more than enthusiastic sitting ovations. Aside from the occasional evening length ballet or for premieres where the audience is stocked with friends, relatives, and hangers on, NYCB audiences reserve standing ovations for pieces that either are shockingly good, shockingly well-performed, or shockingly motivating – often all three. At the conclusion of Thursday’s NYCB performance, the audience, at least from my vantage point, rose en masse and cheered. Justin Peck’s new ballet had added a fourth criterion for prompting a NYCB standing ovation: it hit a collective New York City nerve.

The two premieres represent very different ways of presenting contemporary ballet. Lidberg’s piece is a well-crafted orthodox concept-based dance that leaves any greater purpose, and its heart, somewhere else. The Times Are Racing on the surface seems less well-structured and crafted, but it’s alive with action and purpose: it’s a visual anthem for the millennial generation. 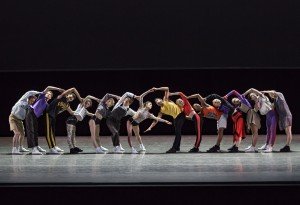 Although abstract, the piece is “about” something – that the times are racing (embodied in the tireless, pulsing, portentous score by Dan Deacon) and it’s time to act – and take positions – to keep up with it. What that action is, or why it needs to be taken, isn’t mentioned – Peck isn’t that literal and doesn’t need to be. Be that as it may, that it’s a call to action is intentional and undeniable; it’s in the choreography, and it’s also in the costumes (by Humberto Leon): many of the dancers, male and female, wear shirts emblazoned on the front (or back) with words like “Act,” “Protest,” “Defy.” I doubt that Peck could have put The Times Are Racing together since November’s election, but in light of current events, it seems like he did. Indeed, at times it looks like a visualization of some of the directions suggested in Barack Obama’s “farewell address.”

The movement here looks a jumble – not nearly as meticulous or as choreographically complex as most of his other pieces, although that’s illusory. Indeed, to the contrary, there’s considerable choreographic control and complexity here: it takes significant discipline to appear out of control and concurrently thoroughly coherent. But for this dance, rigorous structure isn’t really the point: visualizing an explosion of activist energy in a convincing and appealing way is. In effect, with The Times Are Racing, Peck has gone nuclear.

To the extent there’s a narrative here, it’s the process of convincing one representative dancer, Robert Fairchild, to join the others in taking action: don’t just watch from the sidelines; do it – although whether his decision is based on being convinced of the righteousness of taking action or because he likes the social aspect of it isn’t clear. I’ve seen that thought expressed many times in other dances, but this piece is so engaging (as well as emphatic) that it has a significance all its own. 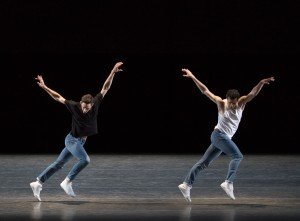 In many ways, The Times Are Racing is a second cousin (several times removed) to Jerome Robbins’s New York Export: Opus Jazz. Instead of young people reflecting their age, both generational and chronological, by being casual and cool (and self-absorbed, depending on your point of view) the young people in The Times Are Racing reflect their age by being casual and driven (and self-absorbed, depending on your point of view). The piece is also related to JR’s Les Bosquets, a week-long piece d’occasion that was presented at the beginning of NYCB’s Spring 2014 season. [The repeated image of a scrum of dancers is an echo of an almost identical image in Les Bosquets.] But instead of being a vision of rioters seen from the outside in, Peck’s piece is a vision of a nascent protest movement from the inside out. Here, the protest, whatever it’s about, is both a moral thing to do and a social thing to do.

Aside from the protest “scrums,” the piece seems in constant motion, except for an extended glorious soft shoe routine for Fairchild and Peck, and a pas de deux for Tiler Peck and Amar Ramasar, which evolves into an apparent gender neutral exercise in mutual partnering. All the dancers appeared to be having a blast – including both the leads (those mentioned, and Brittany Pollack, Gretchen Smith, and Savannah Lowery), and a 6/6 corps.

Although Peck’s piece would have been a rousing conclusion to the evening without regard to whatever preceded it on the program, coming as it did after Lidberg’s new ballet made it appear even more explosive than it is. In contrast to the deceptively liberating movement quality of The Times Are Racing, the movement quality in The Shimmering Asphalt seems tight and restrictive. There’s a lot going on, but most of it seems isolated into parts of the stage, and the overall sense is dry and dreary. Dancers are clad in gray costumes – the women in gray tops and gray short skirts; the men either bare-chested or with grey tops, and wearing gray kilt-like coverings that look silly – but that’s obviously what Lidberg wanted. The color of the surrounding set is bleak black. 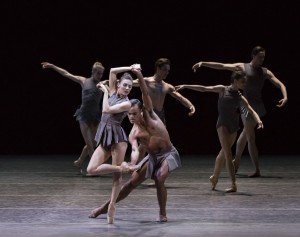 As the piece opens, soft light illuminates one dancer (I believe it’s Sara Mearns, but the light was too dim to be certain) who stands alone center stage. Soon thereafter, others join her from the wings, and she disappears into the darkness. The groups of dancers who follow are seen in various permutations of pairs, trios, solos, and larger groups, each moving somewhat sequentially and independently: the emphasis is on one individual grouping at a time. Some of these component dances are individually interesting to watch, but with rare exception they look overly careful and complex, and ice cold – as if the dancers’ movement had been honed with a scalpel. The piece has a large cast (5 lead women; 4 lead men, and a corps of 3 men and 3 women), but it’s spaced such that it never looks busy. Normally that’d be a good thing, but here it just gives the impression of dancers moving slowly and deliberately in space, without a central focus. And just when you think Lidberg is going somewhere with this – a pattern develops; a dance sequence ends – he stops and moves the piece in a different direction. The ballet ends with a portion of the black backdrop appearing to shimmer with tiny flecks of glittery light, and with the overhead spot back on a solitary Mearns.

As I watched, I thought that perhaps Lidberg was visualizing the night sky, with the dancers as stars that sometimes seem to come together, sometimes appear and disappear, sometimes form patterns and sometimes not – with Mearns as the “north star.” How else to explain the shimmering backdrop at the piece’s conclusion? But then I decided if he was doing that, he might have used a set with a little more brightness, mystery and awe. This was just leaden and dull. So, subject to reconsideration on a second viewing, it seems as if Lidberg’s grand plan here is exactly what the title says – to visualize shimmering asphalt. Even the commissioned score by David Lang, which itself sounded repetitious, seemed vibrant in comparison. 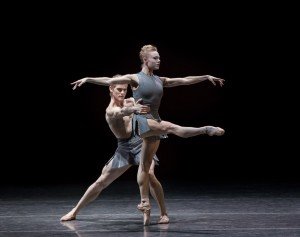 Martins’s piece, however, has vibrancy to spare. As opposed to Peck’s The Times Are Racing, which is grounded in the real world, and Lidberg’s The Shimmering Asphalt, which is grounded in…asphalt, Fearful Symmetries leaves earth and gravity behind. The abstract ballet doesn’t go anywhere or do anything but it’s not supposed to. The repetitious choreography can become tiresome (although it’s faithful – maybe too faithful – to the John Adams composition), but the dancers – beautifully costumed (by Steven Rubin) in different shades of red and pastel orange – never stop moving, and it has a collective spirit that lifts the heart: celestial bodies soaring through space. The NYCB dancers, most of whom debuted in their roles the previous night, sailed through it, led by pairs Kristen Segin and Troy Schumacher, Emilie Gerrity and Aaron Sanz, and Unity Phelan and Harrison Coll – abetted by three featured men, a 4/4 featured corps, and 6 women. It’s a big dance, but the sense is no different than watching birds in flight. It’s difficult to believe that this example of New Combinations is almost 27 years old – older than nearly all the dancers who performed it.