It’s an unfortunate fact of performance life, but financial issues, always a major concern, have affected ballet schedules. Long gone are the days when New York City Ballet’s multi-week seasonal schedules, seven performances a week, featured a different shuffling of that season’s dances every night, and a balletgoer could pick a performance that includes ballets he/she most wanted to see and pass over ones that included pieces that were of little interest. This was a boon for balletgoers with limited budgets, but it must have been somewhat chaotic for the company to present a different program each night.

For the past several years, and as has long been the case with other companies, programs now are batched under a single umbrella description, and these same programs are repeated multiple times in a season. The following season, a limited number of dances from the prior season are replaced by new ones, but much of the dances are simply recycled to save rehearsal costs and provide a modicum of certainty to the company’s personnel. While NYCB performs more of these ‘batched programs’ in one season than other companies do in a full performance year, being force-fed a ballet one doesn’t care to see that happens to share a bundled program throughout the season with a ballet one does want to see – even if, as is often the case, the former proves well worth the investment – limits a balletgoer’s options: there’s no incentive, unless one is a balletomaniac, to see more than, at most, one such program per season.

But there’s another side to what appears to be this unfortunate development – the more a piece is performed, the more chances there are for new casts to assume roles.

Since much of what’s been presented so far in this NYCB Spring 2016 season is a repeat of what I’ve reported on previously, I’ve limited my attendance so far largely to seeing new casts in familiar ballets, and they have not disappointed.

Jewels is yet another Balanchine masterpiece. As anyone reading this already knows, it premiered in April, 1967, and is recognized as the first evening-length plotless ballet. But that fact is somewhat irrelevant – Jewels is three independent ballets connected by the overall theme of precious gems, with each piece as different from the other as are the gems themselves and the subjective moods they inspire. But although each ballet can stand on its own – Rubies and Diamonds, of course, routinely have – they have a greater visual and choreographic impact as an ensemble, not only because of their collective aura, but also because they move from one temporal quality to another: Emeralds is turn-of-the-twentieth-century romantic; Rubies is early twentieth century jazzy; and Diamonds is…well, timeless. 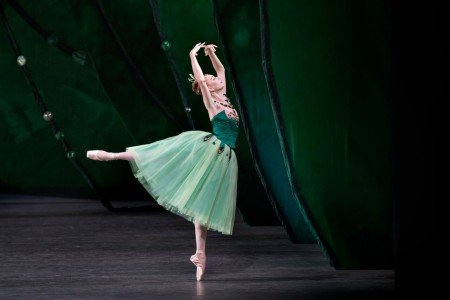 The performance last Sunday afternoon featured a plethora of role debuts in Emeralds and Rubies, each of which was noteworthy.

Emeralds is my least favorite of the three gems – or at least was until this performance. I always found it somewhat unfocused, and the green base-color, together with bubbly strung curtain decorations, makes it look sea-green rather than emerald. This underwater motif, though it enhances the romantic tones of the music (excerpts from Gabriel Faure’s Pelleas et Melisande and Shylock), gives the ballet an aquatic aura it doesn’t need.

But then there was Sunday’s performance, and the somewhat murky water I’d previously seen cleared. This was impressive work on all levels. The ten-woman corps (four of whom are apprentices; the other six recent additions to the company) looked fabulous: in sync, in mood, and in impeccable execution. I’m already looking forward to the annual puzzle of determining who each dancer is. (They should come with their names emblazoned on their costumes, like professional athletes.) (No, I’m not serious.) The three featured dancers, Kristen Segin, Harrison Ball, and especially Indiana Woodward, did fine work as well.

The lead dancers, however, made this performance particularly memorable. Ana Sophia Scheller has been having a splendid year since recovering from an injury, and her performance in Emeralds was exemplary in every respect. Scheller may not have the distinct stage persona that others in the company do, but she is technically immaculate, and equally comfortable with quicksilver footwork as she is with legato phrasing. Her nominal partner (his role is not limited to partnering her), Chase Finlay, was fully focused, and flawless, in his execution, although a bit more animation would have been welcome. But the most impressive performance was delivered by Ashley Laracey (effectively partnered by an increasingly capable Anthony Scordato) as the ‘second’ lead ballerina. While perhaps a bit less regal-looking than Scheller, her role doesn’t call for regality. Rather, it requires her to display the dreamlike aura of the ballet’s namesake gem.  Laracey’s performance – particularly her solo – captured that dreamy reverie. 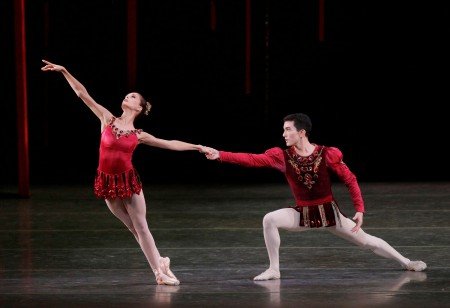 Lauren Lovette and Anthony Huxley first assayed Rubies in the context of NYCB’s 2012 Fall Gala (the “Valentino Gala”), during which the lead roles in Rubies were trifurcated for the occasion, and they were assigned the central pas deux.  So Sunday’s performance was only partly a role debut for them – it was their first performance as the leads in the entire ballet.

Lovette now dances the role with the same jazzy sensuality she did previously, as the role calls for, but with the added opportunity to demonstrate her facility with the angularity and hyper-extended form that Balanchine derived from Stravinsky’s Capriccio for Piano and Orchestra. It was a marvelous formal debut – and is further evidence, as if any is needed, of her versatility. Huxley, on the other hand, has grown into his role dramatically. While he danced the role well technically four years ago, he was distant and showed no ability to relate to his partner. That’s now changed for the better – as has their overall performance as a result. 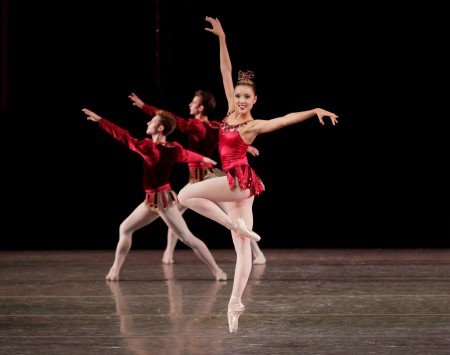 The other Rubies role debut was equally spectacular. In each of the three Jewel gems, the lead dancers may be considered as representing different perceptional properties of the stone. Unlike an emerald, the gentle aura of which might draw an observer into its innate emotional depths, a ruby is a fiery and sensuous gem that has power to reach out and grab. Lovette and Huxley delivered the ruby’s sensuality. Emily Kikta, who also danced part of this role at the Valentino Gala, delivered the power. Kikta was not only technically superb, she was dominant. When she at one point is surrounded by men, each one partnering her as she assumed a deep arabesque, there was a clear sense that these men were not just part of a nice design pattern – they were willingly submissive to her overwhelming and commanding radiant presence.

When NYCB returns it to the repertory, look for Lovette and Kikta to dance super Sirens in Prodigal Son.

The third gem, Diamonds, which featured Sara Mearns and Tyler Angle as the leads, was the only ballet of Jewels’s three components without a role debut. This is one of Mearns’s finest roles, and, technically, she was as brilliant as the gem. But this is also one of those roles that Mearns plays as if she was still dancing Odette: the regality in this role should be dominant, but Mearns executes it with far too much pain and pathos etched into her face until the final movement. Angle delivered his usual impeccable performance on every level. 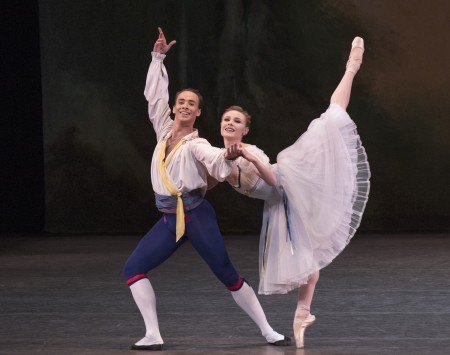 Mearns did much better with the opening piece on the April 22 program, Bournonville Divertissements. Separated from La Sylphide, for which it was last spring’s opening act, the piece becomes more than merely an informative summary of Bournonville style: it’s a joyous bouquet of good humor. Here, Mearns danced the pas de deux from Flower Festival in Genzano with considerably less rigidity than she did last spring. She lacks the youthfulness of others I’ve seen in the role, but in other respects was spot on.

With two exceptions, five of the seven dancers in the pas de six were ones I’ve seen for the first time. The ensemble danced with appropriate effervescence, as they did in the Tarantella that followed.  I particularly admired the performance by Lauren King. She has a broad smile that at times comes across as plastered on. This could have easily been the case here, where a smile comes with the choreographic territory. But this time she modulated her facial expression, and, coupled with her usual technical proficiency, delivered a thoroughly delightful performance. And she and Huxley looked particularly good dancing together.

Jerome Robbins’s Moves returned to the repertory, and Friday’s performance brought with it role debuts by Emilie Gerrity and Adrian Danchig-Waring. While I admire what Robbins has accomplished here, the admiration is an academic one. Moves, of course, is considered the first ballet that in its entirety is choreographed to no score at all. The challenge was to create a coherent work of ballet art without musical guidance. That Robbins did. And watching the dancers hit the right step at exactly the right moment, in sync with each other, provides a measure of excitement. But while Moves was certainly adventurous when it premiered in 1959 in Spoleto (it was created for Robbins’s short-lived company Ballets: USA), by the time it received its NYCB premiere in 1984 it had already become less of a novelty. By then, and certainly now, choreographers have long included periods of silence – to varying degrees – in a variety of work. That choreographers have not created a bevy of ballets without music (or sound of any sort) at all, as Robbins did here, speaks to what may be an essential incompatibility of dance with silence over the entirety of performance time.

Be that as it may, Gerrity, one of the many members of the corps given significant opportunities of late, shined in her role debut, and particularly in the opening pas de deux with Danchig-Waring.

The evening concluded with sizzling performances of Balanchine’s Tchaikovsky Pas de Deux, and Symphony in Three Movements. The latter, yet another Balanchine masterpiece, was led by Sterling Hyltin, Megan Lecrone, Scheller, Joseph Gordon (in a role debut), Taylor Stanley and Daniel Ulbricht. All (and particularly Scheller) performed magnificently. The last time I discussed this piece, it was in the context of Miami City Ballet’s rendition of it in New York a few weeks ago. I lauded the performance, but found that the lead could not match the speed and precision of NYCB’s lead ballerinas. Hyltin’s typically outstanding performance demonstrated that.

In eight minutes, Balanchine pours more choreographic grandeur and excitement into Tchaikovsky Pas de Deux than seems possible, and Tiler Peck and Andrew Veyette provided their usual superlative performances. Peck’s role was originated at its 1960 premiere by Violette Verdy, who passed away in February. Although not indicated as such, Peck’s performance was a fitting tribute to one of NYCB’s most treasured ballerinas.