Rumors to the contrary notwithstanding, New York City Ballet is doing very well. Granted there’s been some highly-publicized turbulence and some decisions made that, upon discovery of real facts, may turn out to have been ill-advised. But based on the two opening programs of the Fall, 2018 season, the company may now be stretched a bit thin, but its vitality continues unabated.

The two programs were comprised of only a small part of NYCB’s bedrock repertoire, the dances of George Balanchine, but they were glorious examples of that choreographer’s genius regardless of composer or period (here Bach, Bizet, Faure, Stravinsky, and Tchaikovsky). The performances I saw last week of Concerto Barocco, Tchaikovsky Pas de Deux, Stravinsky Violin Concerto, Symphony in C, and Jewels, each a company staple, were thrilling to watch, and even more exciting because of the enthusiastic audience response.

Thursday’s program, the season’s first repertory evening of Balanchine classics, displayed everything about what makes a classic a classic, and a masterpiece a masterpiece. Since each of these dances is well-known and performed by companies world-wide, my discussion of each will be brief. 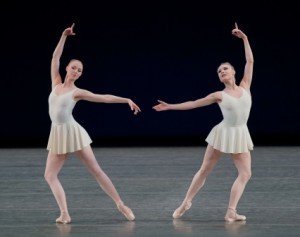 Like Serenade, Concerto Barocco is an outgrowth of a School of American Ballet exercise that preceded NYCB’s existence. It premiered in 1941 with American Ballet Caravan, entered the repertory of Ballet Russe de Monte Carlo in 1945, and was first presented by NYCB three years later.

Some recent performances I’ve seen have lacked the sparkle and pin-point timing that Concerto Barocco requires, but not on Thursday. The company danced as if something needed to be proven, although that’s not the case. Teresa Reichlen and Russell Janzen led the performance, with Reichlen particularly spectacular (as was the eight-ballerina corps). My only quibble was the casting of Abi Stafford as the second female lead. She executed well – no complaints about that – but sometimes a significant height difference between one ballerina lead and another works as visual contrast, but here it didn’t because when they were supposed to match each other technically, Reichlen’s superior flexibility and extension made Stafford appear to consistently come up short – which shouldn’t have been an issue in what otherwise was a stellar outing from both of them.

Stellar, however, is not a strong enough word to describe Tiler Peck and Joaquin De Luz’s performance in Tchaikovsky Pas de Deux. This pairing always brings down the house, but, with Thursday’s being their final performance of the piece together (De Luz is scheduled to retire on October 14), the significance for them, and for the audience, increased exponentially. Their performances did as well; neither has looked better, together or individually. And Peck, whom I’ve described since at least 2013 as a world-class ballerina whose performances should not be missed, continues to astound, squeezing a particularly gasp-inducing twisting seemingly spontaneous off-balance flourish at the end of her fouettes in the coda that was believable only because it was done in public.

Stravinsky Violin Concerto, which premiered in 1972’s Stravinsky Festival, took a bit of getting used to for me, but repeated exposures have demonstrated what a masterpiece it is. Essentially, Balanchine has taken a classical form for the dance’s opening (Toccata) and concluding (Capriccio) movements, played with it, and sandwiched in between two pas de deux (Aria I and Aria II) of contrasting dynamic character (and color) even as the music for both is adagio and more aurally angular. Consequently, the piece overall conveys a sense of visual balance and out-of-balance, classic and modern, concurrently. 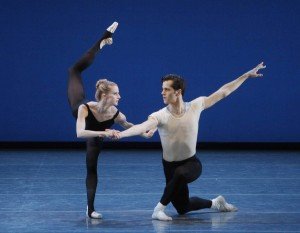 In addition to their featured roles in the piece’s opening and closing segments, Sara Mearns and Taylor Stanley led Aria I and Sterling Hyltin and Ask la Cour Aria II. Mearns did fine work overall, and particularly with Aria I, and Hyltin and la Cour danced an exquisitely ascetic Aria II. But as marvelous as all three were, Stanley, in his role debut, was extraordinary both in his partnering, execution, and attitude. Stanley’s evolution since first joining the company has been remarkable to watch.

The evening concluded with Symphony in C, a continuing feast for the eyes – and another Balanchine masterpiece. The dance premiered with the Paris Opera Ballet (as Le Palais de Cristal) in 1947, and entered the NYCB repertory in its first program the following year. Although it bears similarity to several Balanchine pieces, because of the Bizet score and the supersonic speed of movement (one can watch members of the corps racing from the end of one choreographic movement cluster to just barely get into position for the beginning of the next – which might be comical if it weren’t done so skillfully), it has an indelible character of its own. And with three of the four Movements being allegro vivace, the piece seemed to conclude much too soon. 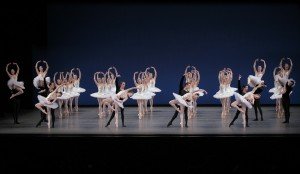 Ashley Bouder and Joseph Gordon led the First Movement – Bouder with her usual flair and Gordon stepping up and executing sensationally in his New York role debut. Maria Kowroski and Tyler Angle, veterans in their roles, led the Second Movement (Adagio), and both had the house cheering. In New York role debuts, Indiana Woodward and Sebastian Villarini-Velez soared through the Third Movement, and a very capable and confident-looking Erica Pereira and Troy Schumacher (in his New York role debut) led the Fourth Movement.  The soloists and corps, too numerous to identify here, executed flawlessly.

The company’s season began on Tuesday, Wednesday and Thursday with Balanchine’s glittering Jewels. I was unable to see those programs, but the one on Saturday afternoon was worth waiting for. Peck and Stanley and Unity Phelan and Adrian Danchig-Waring (Stanley and Phelan debuted in their roles earlier in the week) were sublimely mysterious in Emeralds, Hyltin and Andrew Veyette jazzily sultry in Rubies, and Mearns and Gordon (who debuted earlier in the week) led Diamonds. I’ve complained about Mearns’s interpretation of the role previously – too maudlin, too filled with pathos – on many prior occasions, but here she largely played it straight until Odette, and unnecessary drama, crept back briefly. Everything else about her performance was very well done. And Gordon again executed unexpectedly well for someone so new in the role. Of the soloists, Sara Adams, Sean Suozzi, and Meagan Mann delivered enthusiastically in Emeralds, and Kretzshmar, who substituted (and debuted) in her role earlier in the week, was sensational in Rubies, dancing with a feral intensity I’d not previously seen from her. 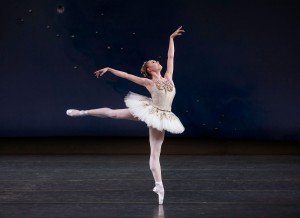 Sara Mearns in a prior performance
of George Balanchine’s
“Diamonds,” from “Jewels”
Photo credit Paul Kolnik

Finally, I must once again credit NYCB’s orchestra for its usual first-rate execution, including by soloists Kurt Nikkanen and Arturo Delmoni (on violin) in Concerto Barocco, Nikkanen in Stravinsky Violin Concerto, and Susan Walters’s piano solo in Rubies. Music Director Andrew Litton led Jewels, and each of the four dances the previous night was directed by Clotilde Otranto, one of the company’s two Resident Conductors. Both have outsized and exciting conducting personalities that perfectly complement the excitement on stage, and the very knowledgeable NYCB audiences know that.

Indeed, the audiences at these two performances added a special quality to these programs. Clearly, these audiences came not just to see the ballets (which, I suppose, most have already seen many times previously), but to support the unwarrantedly beleaguered company. The extras that came with that at these two programs – whoops and standing ovations (both unusual for NYCB audiences) – took the programs to another, and appropriate, level of appreciation.