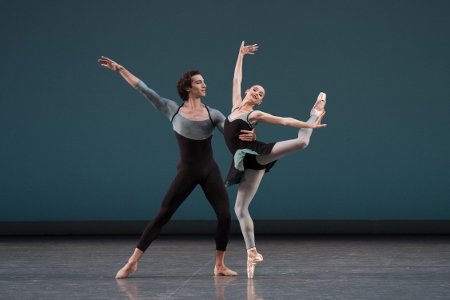 New York City Ballet concluded its 2016 winter season with one program devoted to contemporary choreographers, and one to three Balanchine ‘black and white’ ballets, two of which are unquestionable masterpieces. Both programs indicate how far this company has come in the last several years, and how deep its depth of talent is.

I’ve frequently observed that Peter Martins, NYCB’s Ballet Master in Chief, labored under the shadow of Balanchine for years. I recall that he was severely criticized for choreography that didn’t, and couldn’t possibly, measure up to that of his predecessor, as well as for purportedly allowing the company to languish, with insufficient attention paid to maintaining excellence in the company’s legacy repertory.

If that were ever true, those times are gone. It may be the product of a fortuitous convergence of circumstances that made attending a NYCB performance an exciting, rather than merely reverential, thing to do (extraordinarily talented dancers at every level, more successful development of contemporary ballet choreographers, marketing that emphasizes the youthful vibrancy and inter-cultural relevance of the company), or it may have been the case all along but went unnoticed in an effort by some to prove that the company under Martins’s tenure was living down to expectations. But regardless, in the past six to eight years, NYCB has turned around under his leadership. It’s been blessed with a bevy of superb corps dancers who are given ample opportunities to demonstrate their ability, and even Martins’s choreography looks better as the temporal distance between Martins and Balanchine increases.

I had not previously seen Martins’s Ash, which premiered in 1991. It’s essentially a study of dancing in counterpoint, expanded to a serviceable ballet form – a pair of soloists, supplemented by four pairs of demi-soloists. But Michael Torke’s commissioned score has enough variety of sound and meter to maintain aural interest, and Martins’s choreography makes the most of it. It’s a surprisingly joyous, if not particularly complex piece; a celebration of youthful vigor not complicated by the sense of futuristic sterility that marks other Martins/Torke collaborations.

Ash’s structure is simple. Essentially, the lead couple is framed by the four pairs of criss-crossing demi-soloists. This pattern repeats periodically, augmented by the four pairs dancing separately, the men and women dancing in counterpoint to the lead man and woman, and sequential solos that gave each dancer an opportunity to shine. With soloists Ashley Laracey and Zachary Catazaro as the lead dancers, both role debuts, the piece was given a superlative performance. Each imbued Martins’s choreography with just enough individuality and zest to get beyond being empty vessels. And the supporting demi-soloists, all members of the corps, did the same and all performed admirably.

Laracey is a particularly strong vehicle for Martins’s choreography, as she demonstrated a couple of years ago in Martins’s 2002 piece, The Infernal Machine. She and her partner in that performance, Amar Ramasar, ignited the stage, giving a performance I described as watching lightning bolts mate. The dance was repeated on this program, with young and highly promising corps dancers Unity Phelan (who also appeared and did a fine job in Ash), and Preston Chamblee. With these two dancers, the piece appeared to have a more feral focus: less machine, and more inferno. It was a fabulous performance by both these young dancers.

This Bitter Earth is a powerful pas de deux by Christopher Wheeldon, an excerpt from a larger ballet called Five Movements, Three Repeats. Unlike some other excerpts, this one can stand very well on its own – even better than in context. Choreographed to a seamless mix of vocals by Dinah Washington and a composition by Max Richter, the piece explores a couple’s agony and survival, and it is hauntingly magnificent. At its NYCB premiere in September, 2012 (at the already fabled ‘Valentino Gala’) Wendy Whelan danced the lead female role, partnered by Tyler Angle. At this performance, Sara Mearns replaced the now retired Whelan, and an essential quality was missing. Mearns executed superbly, and danced with her usual overwhelming pathos. Her performance was beautiful to watch. But this pas de deux has grit to it: agony, despair, and ultimately, the nobility of suffering and surviving. None of these qualities was evident in Mearns’s portrayal – just brilliantly expressed but one-dimensional sadness.

Jeux, choreographed by Danish choreographer Kim Brandsrup, premiered last fall. I had a mixed response to it then – and still do. It’s beautifully crafted, and filled with dramatic-looking imagery. But it remains as opaque, dry, and emotionless, as it did on first view. 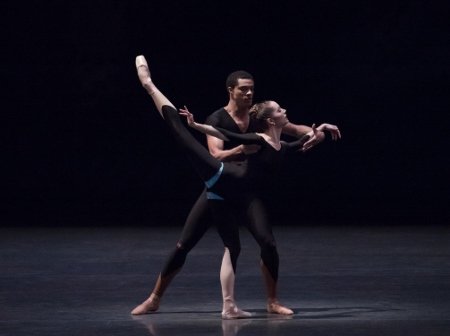 Brandstrup’s broad subject, not surprisingly, is the ‘games people play’, and his ballet can be seen as a reimagining of the original Jeux, choreographed by Nijinsky in 1913 for the Ballets Russes, to a score by Claude Debussy. As Nijinsky’s Jeux is reported to have been, Brandstrup’s has somewhat of an ambiguous narrative. But where Nijinsky explored the undefined relationship between two women, a man, and an errant tennis ball, Brandstrup explores the caverns of a human mind and the mental processes of envy, depression, attraction, and obsession. Where it goes seriously wrong is in its density and incomprehensibility, reflected to an extent in its thematic inversions that echo the ambiguities in the Nijinsky original, but takes them far beyond comprehensibility. Brandstrup notes that ‘jeux’ does not just mean ‘games’, but also play acting, role playing, deception, and fate. Fair enough – and I’ll concede that consistency and transparency are not necessarily components of a ‘game’, regardless of its definition. But pretentiousness, which this ballet is rife with, usually isn’t.

Mearns repeated in her role as the sometimes blindfolded protagonist, as did Adrian Danchig-Waring as the ball-bouncer. Lauren Lovette, finally returning from an injury, and Craig Hall, both in role debuts, replaced the original cast’s Sterling Hyltin and Ramasar as the couple she envies and tries unsuccessfully to separate. Both executed well – and Hall’s brilliance as a partner cannot be overstated – but their dancing was secondary to the piece’s pervasive perplexity.

The evening concluded with the return of Paz de la Jolla, choreographed by Justin Peck, which premiered in 2013 (and which was the subject of the 2015 documentary film Ballet 422). I found it a somewhat disappointing successor to his marvelous Year of the Rabbit, but acknowledged that a second view might temper my criticism. It has. Looking at its overall impact rather than deconstructing it helps. It’s a serviceable, if not particularly innovative, dance that oozes summer sunshine, dreamy moonlit nights, individualistic beach/boardwalk behavior, and Ratmansky-like ocean waves of dancers. The leads, Hyltin and Ramasar as the summer lovers, and Tiler Peck as a percolating beach bunny (or, having recently seen the choreographer’s The Most Incredible Thing, a beach roaming cuckoo-bird), gave the piece the emotional weight required to take it beyond cliché.

The Balanchine Black and White program which included the towering Agon and The Four Temperaments, began with Episodes, a 1959 piece that I once described as choreographic castor oil.

An homage to Anton von Webern, Episodes is set to various Webern orchestral works, and originally included a segment choreographed by Martha Graham, and a solo for one of her company members named Paul Taylor. In its current form, which NYCB has performed since 1961, it includes four segments, the first three of which anticipate a direction that Balanchine would later go with more academic, avant-garde exercises such as Variations pour une Porte et un Soupir (1975). Each of these three segments includes snippets of movement to Webern’s snippets of musical ‘episodes’, and expands the music’s impact. They’re somewhat tedious to watch, but the craftsmanship and execution are beyond reproach – particularly with respect to the second segment, to Five Pieces, Opus 10, exquisitely performed by Teresa Reichlen and Jared Angle. Abi Stafford repeated her fine performance in the first segment, partnered by Catazaro (whose wild-looking hair augments the sense of rugged individualism of his execution), and Ashly Isaacs and Taylor Stanley led the third segment with an admirable combination of power and grace. Mearns and Danchig-Waring danced with particular vibrancy in the concluding segment, which, inspired by Bach, is the most accessible of the four, and both cleanses the visual palate for, and neatly segues into, the dances that followed.

For me, the best was saved for last. The Four Temperaments, which Balanchine choreographed in 1946 to a commissioned score by Paul Hindemith, is an extraordinary piece that illustrates both Balanchine-in-transition (in multiple respects), but also stands on its own as a thrilling, singular celebration of the human spirit. Led by Anthony Huxley’s extraordinary Melancholic variation, Tiler Peck and Tyler Angle’s masterful Sanguinic, Ask la Cour’s Phlegmatic, and Isaacs’s superb Choleric, it is as fresh and relevant as when it premiered in a war-weary world, and deserves to be on anyone’s short list of ballets that must be seen at least a few dozen times.

The quality of the choreography and execution notwithstanding, the most extraordinary moment of the evening, and perhaps the season, came during the curtain calls. As the leads emerged from the wings to take their first round of bows in front of the corps, Peck, escorted by Angle, slipped and briefly fell to the floor. The audience gasped, but she rose quickly and smiled an embarrassed ‘what just happened?’ smile. She was delightfully flustered, and the audience, already enthusiastically acknowledging the superb performance, was energized further by the unexpected humanity at the end of this very human piece – implicitly recognizing that if Tiler Peck is going to make one minor mistake in an entire season, saving it for a bow is the way to do it.