There’s a first time for everything. I’ve never reviewed a birthday party before.

But this wasn’t just any birthday party. This was a gala celebration honoring New York Theatre Ballet’s founder and Artistic Director, Diana Byer, on her 70th birthday. All birthday parties, and all galas, should be like this one.

Titled “The Byer Legacy,” the evening honored Byer by recognizing and paying tribute to her work as a dancer, director, teacher and motivator. And it was about as homespun as a gala can be that included as attendees multiple representatives from American Ballet Theatre, and Richard Alston, Valda Setterfield, and David Vaughan, among many others – and, in a souvenir program that included salutations by dance world dignitaries interspersed with thanks from her students and from choreographers she’s nurtured, a congratulatory message from Lisa Rinehart and Mikhail Baryshnikov.

The first time I saw NYTB, four and a half years ago, I was thoroughly impressed with the company’s eclectic intermingling of lost/infrequently performed masterworks with dances by contemporary and emerging choreographers. That particular program included Jose Limon’s The Moor’s Pavane (the first time I’d seen it since the first ballet performance I’d ever seen – in the Stone Age), a piece by James Waring, whom I’d heard of but whose dances I’d never seen, and premieres by “emerging” choreographers. A year later, after seeing a NYTB performance of Antony Tudor’s Dark Elegies that ranked with the finest I’ve seen anywhere, a different (and startling) piece by Waring, and another excellent newly created dance, I wrote that if NYTB didn’t already exist, it would have to be invented. The company’s reputation, already secure (it was New York’s worst kept secret), has mushroomed further since then, with revivals of dances by Agnes De Mille, Jerome Robbins, Merce Cunningham, Tudor, pieces by Alston and Pam Tanowitz, and more dances by emerging choreographers. The choices made, and the impeccable execution by the company’s dancers, all reflect highly on Byer’s discernment, and her knowledge of dance, her dancers and her audience. Other Artistic Directors should curate with such intelligence. 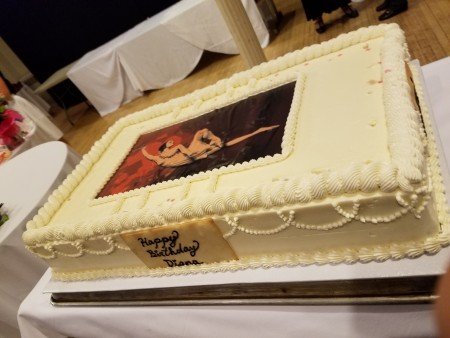 The performances during the course of the evening may not have been intended to be critically reviewed – but describing them will help provide a flavor of the evening’s festivities.

The celebration opened with a company performance of Pam Tanowitz’s Short Memory, which I reviewed in January, 2015. It’s a noteworthy piece that although abstract, slow, and deadly serious at times, is endlessly fascinating, with images that are like thawed memories. Consisting of a series of distinct but integrated sequences, it looked somewhat surreal (in a positive way) in the spiritual space at St. Mark’s in the Bowery, surrounded by an audience cocoon. The superb NYTB dancers included Alexis Branagan, Carmella Lauer, Amanda Treiber, Elena Zahlmann, Joshua Andino-Nieto, and Steven Melendez.

It bears emphasis, and is further evidence of Byer’s strong influence, that the composition of NYTB has been relatively stable over the years, providing the opportunity for dancers to grow in their roles, and for audiences to watch it happen. This was apparent in Short Memory, but also in excerpted dances that followed later. Treiber and Melendez delivered an achingly lovely pas de deux from Alston’s Such Longing, fully transmitting the passion and the complexity of the depicted relationship. It was a breathtaking performance. As the dancers exited the stage area they walked past the choreographer, who was seated a few rows below me, and I overheard Alston whisper to them: “Bravo.” Indeed.

Executed at a similarly high level was the excerpt from Alice-in-Wonderland Follies (choreographed by Keith Michael), a delightful piece that NYTB regularly presents as part of its “Once Upon A Ballet” program geared to young audiences (but which adults will find rewarding as well). A duet for Alice and the White Rabbit, the dance is at once clever, poignant, and funny, and Zahlmann and Melendez executed their roles, and the choreography, to perfection.

The evening was also peppered with appearances by guest artists. Most noteworthy to me were ABT dancers Devon Teuscher and Calvin Royal III in Depuis le Jour, a romantic pas de deux choreographed by Gemma Bond (also a dancer with ABT). The dancers’ execution was flat out brilliant, but equally impressive is Bond’s choreography. Some may consider it retro, since there is nothing particularly novel or quirky or “cutting edge” about it. To me, however, it was refreshingly honest. I’ve seen several Bond pieces over the years, from ensemble pieces to duets and solos, and have witnessed her progress as a choreographer. Depuis le Jour is an example. Being able to choreograph steps into a coherent whole is one thing (and not a small accomplishment); but being also able to create a piece that enables her dancers to convey real characters and emotion in a brief duet, as Bond has done here, is a remarkable achievement.

Romany Pajdak, a First Artist with the Royal Ballet, appeared in Petite Rhapsode, a delicious little solo chock full of allusions to Greek poetry and myth and ballets inspired by them, and also to the making (and preening) of a ballerina. Pajdak, whom I’d not previously seen, is an engaging dancer who brings a touch of whimsical insouciance to her delivery of Antonia Franceschi’s lighthearted but intelligent choreography, which could have devolved into simple mockery, but never did. A former New York City Ballet dancer, Franceschi has had considerable choreographic success in London, where, to my knowledge, she now lives.

Each of these pieces not only evidence their choreographer’s growth, but also the benevolent result of Byer’s nurturing. Both Bond and Franceschi, when they were considerably more “emerging” than they are now, created dances for the first NYTB program that I saw.

Former NYTB dancers also participated. Alexandra Damiani, who was Ballet Master of Cedar Lake Contemporary Dance following an extensive dancing career, and is now a teacher and choreographer, danced a vivid solo she created titled From the Highest Tower. And David Parker choreographed Conga Suite, a trio of witty dances performed with considerable flair by Amber Sloan, Nick Petry, and Tommy Siebold, all of whom appeared courtesy of The Bang Group.

Perhaps the most impressive and enlightening aspect of the evening reflected the extent of Byer’s commitment and ability as a teacher, and her involvement in community projects.

In addition to NYTB, Byer runs a respected ballet school (Ballet School NY), and developed the LIFT program, which introduces ballet to children living in homeless shelters and low income communities. The celebration included an excerpt from an upcoming feature-length documentary that is about the students in that program (and Byer’s patience and perseverance), as well as three short pieces that were developed in the Ballet School NY Summer Camp Program, as part of NYTB’s Page to Stage program. The quality of the choreography, execution and even the costume design by these three students [the dancers/choreographers and their dances were Lily Eugenia Rudd (Miriam); Jennifer Levine (Anne Frank); and Charlotte Anub (C’est La Vie)] speak volumes not just about these young dancers’ potential, but about Byer’s abilities as a teacher and motivator – possibly her most significant contribution to NY dance.

Lastly, Byer also had her own noteworthy career as a dancer (I recommend perusing the Byer Legacy Celebration Facebook page, which includes a treasure trove of photographs from early in Byer’s performing career).  A bit of this, as well as her acting talent, came to the fore in the evening’s closing piece, Tudor’s Judgment of Paris, in which she, Zahlmann, and Christina Paolucci hilariously portrayed over-the-hill floozies on the make – sort of.  Clearly, “over the hill” is something that Byer, at 70 years of age, is not.

It’s no wonder, consequently, that Byer is so highly regarded, that multiple speakers provided anecdotes and bestowed honors, and that her Tribute was sold out.  And that it was also a rare, delightful New York fall evening was icing on the birthday cake.