For its latest evening of dance, New York Theatre Ballet presented a program that focused on contemporary ballet, and on Artistic Director Diana Byer’s continuing emphasis on nurturing emerging choreographers. The evening suffered from the absence of the lost or infrequently performed dances that are usually included in a NYTB “Legends and Visionaries” program. That being said, the performance did not lack for interesting contemporary choreography, highlighted by a noteworthy “solo” debut by Zhong-Jing Fang, Painted Within, and repeat performances of several pieces by Pam Tanowitz  – Short Memory, Light Moving, and Double Andante. Dances by Edward Henkel (ReVision) and Martin Lawrance (Cover) completed the program.

With respect to nurturing emerging choreographers, Byer is on a roll. Last year, NYTB offered the world premiere of Song Before Spring, choreographed jointly by its own principal dancer Steven Melendez and Fang, a member of American Ballet Theatre. This past March, it presented the world premiere of a solo piece choreographed by Melendez alone, Tickling Titans (Parts II and III). They’re very different dances, and, in different ways, both very good.

Now comes the other half of the Song Before Spring pair, Fang, with her world premiere ballet, and it’s a highly commendable initial choreographic effort.

Painted Within is an abstract ballet for five dancers, but one with an obvious theme: being both comforted and confined by dreams. The subject, and some measure of sexual/emotional tension arising from it, is nothing new. But Fang breathes life, and a sense of drama, into it. In the process, she makes optimal use of a composition by Kate Moore: Velvet for cello and piano. An Australian-born composer now working in the Netherlands, Moore is also an accomplished cellist. With this piece, Moore has created a marvelous musical tapestry, filled with the emotional undercurrents that are endemic to the cello without pushing those undercurrents into musical melodrama. Fang has taken this music and given it a visualization that makes sense, but that also does not fill in all of the composition’s emotional blanks. The choreography is a natural extension of the music.

The piece opens with the five dancers (Mayu Oguri, Daniel Salas, Amanda Treiber, Elena Zahlmann, and Melendez) posed within an enclosure – a “curtained” space set upstage center, with the curtain open to the audience. I saw it as a bedchamber, but it could also be simply a surrogate for a space in which images created in the mind of the central character are generated and stored. Zahlmann, the ballet’s focus, is repeatedly subject to, and a willing participant with, the visualized emotional images she’s painted within her head: she either cannot or will not let them simply disappear. 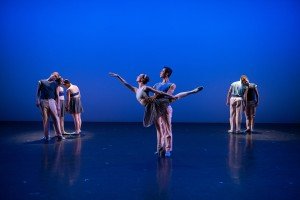 The dancer/images, whether performed as solos, couples, or together, are vivid and dominating, as dreamscapes tend to be, in part a result of the vivid and dominating color-block costumes designed by Sylvia Taalsohn Nolan, which leap off the stage into Zahlmann’s character’s unconsciousness and the audience’s minds, and are impossible to ignore. And the live accompaniment by NYTB’s Music Director Michael Scales on piano, and Amy Kang on cello – which provided the piece with its emotional impetus, was simply superb.

In addition to her skillful application of the music (and at times, of silence), I appreciated Fang’s use of available space: the characters initially dance behind a “sleeping/dreaming” Zahlmann downstage center; then sometimes together with her, sometimes moving exclusively within the enclosure, sometimes out of it, and seguing back and forth seamlessly as images might enter the mind in a dream.

I do have a couple of areas of criticism. The piece goes on a bit too long, with too many false endings: just when you think it’s about to end, it keeps going, maybe into another dream. Not touching the music (apparently) was the right decision, so if she needed to utilize all of the musical space that Moore provides, it might have been beneficial to make a minor alteration to avoid repetition. And choreographically, the dance is fairly straightforward and not particularly inventive – although some may consider the lack of complexity a virtue. Be that as it may, both of these criticisms are common to relatively new choreographers (and by more established choreographers as well), so in the overall scheme of things, they’re minor.

The program’s other premiere was Lawrance’s Cover, a pas de deux for Zahlmann and Melendez. Although I cannot criticize the choreography (which at times – barrel sweeps in particular – is quite lovely), or the execution, the piece as a whole, for all its heat, left me cold. Essentially, Cover is a dramatic duet to music by Franz Liszt, which itself is melodramatic. The choreography describes a process of mutual exploration in the context of an ongoing relationship, and speaks of individual encounters involving passion, pain, separation and return. And although it ends with the couple in each other’s arms, there’s the sense that that’s not an ending; just an intermission in the ongoing relationship and struggle. While it’s well done, it’s got more drama than substance.

The evening began with a reconstruction of Henkel’s ReVision, which was created in 1986. Henkel, who at the time was the company’s Resident Choreographer, has created an atmospheric piece to excerpts from Edvard Grieg’s Holberg Suite. While there is much to recommend it, it’s a stylistic hodgepodge that never quite gets off the ground – which is part of the problem.

Grieg created Holberg Suite initially as a piano suite on the occasion of the 200th birthday of Norway’s then most distinguished writer, Ludvig Holberg, in 1884. A year later he reworked it for orchestra. At this performance, the accompanying music was piano and cello (again, played by Scales and Kang). The composition is intended to capture the musical Baroque style of Holberg’s time, as well as prevalent dance forms. But you wouldn’t know this from Henkel’s piece. 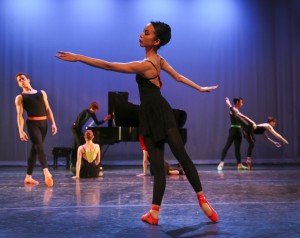 The ballet has an outdoorsy atmosphere, courtesy of Nolan’s foresty multi-colored costumes. It begins interestingly with Treiber being carried by Melendez in a stage-spanning bicycle lift while the other dancers, to my recollection, kneel on the stage floor. This auspicious beginning then goes nowhere. And instead of any sense of Baroque (which is fine if that’s where Henkel doesn’t want to go – this is, as announced, a revision), the sense is some combination of ballet and modern dance that, notwithstanding some moments of airiness, has too much floor work and consequently a sense of weight that the music doesn’t support. As usual, the performances were top flight, led by Treiber, Zahlmann and Melendez, and including Guyonn Auriau, Alexis Branagan, and Erez Milatin, late of the Gelsey Kirkland Ballet, who made a distinctly positive impression in his first (to my knowledge) outing with the company.

The second half of the evening was comprised of the three Tanowitz pieces. This was an unfortunate decision – Tanowitz’s dances, although distinct, have a sense of sameness when grouped together and lose the cutting edge that seeing them individually provides. All have been previously reviewed in detail, so I’ll only address them briefly here.

Short Memory, choreographed to musical compositions by, or in homage to, Henry Cowell, is my favorite of the three. Even though it can look dry and dogmatic and deadly serious at times, Short Memory is endlessly fascinating, filled with startling but beautiful almost other-worldly images that at times appear isolated and relatively rigid, like thawed memories, and with a look that is dramatic and shocking, but always somehow surprisingly serene. And Branagan and Oguri cut through the choreography like knives through butter. The excellent cast also included Daniel Salas, Treiber, Zahlmann, and Melendez.

When I first considered it, I saw Double Andante as perhaps a choreographed equivalent of Piet Mondrian’s “Broadway Boogie Woogie.” It’s life, or a slice of it in time, reduced to its individual essence, with the stage populace moving unpredictably but not uniquely, and sometimes connecting with others (pairings dominate); sometimes not. Tanowitz uses the entire stage, and has her cast of ten dancers twist, turn, pose, shimmy, lie down, rise up, and through it all move as if they were navigating prescribed pathways. 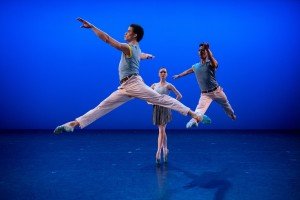 Light Moving was most recently reviewed. It gained something with the replacement of the sole male of the trio with Branagan. It’s now much more balanced; less strange-looking. But I still think that the piece, which, with its white leotard bottoms (most of the upper half is covered) providing the appearance of moving light, is not as significant as the other two.

The initial half of the evening’s dances were separated by a pair of costume-change musical intermezzos. The first featured Kang in an extraordinary rendition of Holst’s The Fall of the Leaf, II. Poco Adagio; the second, a smashing violin performance of Grazyna Bacewicz’s Kaprys Polski by Chloe Kiffer, who later accompanied Scales on the first two of the Tanowitz pieces.

This program was also billed on NYTB’s website as part of its new “Uptown/Downtown/Dance” series (on a different page from that referencing it as part of its Legends and Visionaries series), which apparently will be devoted exclusively to contemporary dance.  If that’s a signal that NYTB is abandoning its Legends and Visionaries series, that would be unfortunate – it’s been a highly enlightening, eclectic, and entertaining set of programs.  Nevertheless, and even though there were no legends or visionaries in sight, this NYCB program proved to be a fine evening of contemporary ballet.