March 14, 2019
REP Program: Scramble, The Elements of Style, The Seasons

The venerable New York Theatre Ballet began its 40th Anniversary year with a program designed by company Founder and Artistic Director Diana Byer to be representative of the NYTB “family tree.” By presenting pieces choreographed by Merce Cunningham, Matthew Nash, and Sir Richard Alston (NYTB’s Resident Choreographer for the next two years), each of whom has contributed, directly or indirectly, to the company’s success over the years, Byer accomplished her goal. And the sense of “family” was augmented by the overarching presence of David Vaughan, Cunningham Company archivist (as well as dancer, author, and dance historian, among a host of other accomplishments), who died in 2017, and who was in large part NYTB’s Cunningham connection.

It takes a lot for a company, particularly one as understated as NYTB is, to be described as “venerable.” When I first became acquainted with it, a mere five or six years ago, I wrote that if NYTB didn’t exist, it would have to be invented. What the company does so well, based on many of its past programs, is to present dances that may have been overlooked by major companies, to provide a showcase for emerging choreographers, and to make ballet and contemporary dance accessible.

What it also does is make those dances it elects to perform look good – maybe better than they did originally. I’ve mentioned previously that, from what I’d seen of his work (and I don’t pretend to be an expert in it), I haven’t really liked Cunningham. I can understand the appeal to many of what he created, and appreciate his position in the dance pantheon, but what I’d seen was too dry, too distant, too conceptual, and not at all entertaining. It might be “pure dance,” but to my eyes what I consistently saw appeared ascetic and sterile. It took a 2015 NYTB revival of a Cunningham piece, Cross Currents, to show me things in Cunningham’s choreography I’d not previously observed, and to appreciate his work – at least more than I had previously. 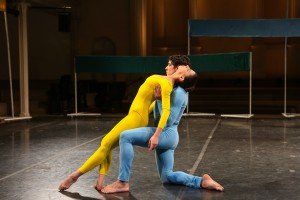 Much of what I saw in Cross Currents I saw also in Scramble, the program’s opening piece, and one that Vaughan thought would be a good fit for NYTB. It is. These performances were dedicated specifically to Vaughan.

Perhaps it’s the time period – Cross Currents was created in 1964; Scramble in 1967. Maybe what I perceived as his orthodoxy was more relaxed during this period, or maybe what I’d previously seen was not representative. Regardless, the version of Scramble that was danced on the opening night of the three performance run at NYTB’s home stage was powerful – which is not a word I thought I’d ever use to describe a Cunningham piece – and brilliantly executed by NYTB’s eight dancer cast: Alexis Branagan, Joshua Andino-Nieto, Giulia Faria, Monica Lima, Dawn Gerling Milatin, Erez Milatin, Sean Stewart, and Amanda Treiber.

As originally conceived (and as described by Vaughan), Scramble’s contents were selected by chance from among eighteen short segments that Cunningham had choreographed. Twelve of the eighteen were the usual number performed, and the specific sections for each performance, and their order of presentation, would vary from program to program. At times the Cunningham dancers didn’t know what would be included in a given performance until several hours in advance, and had to … scramble.

The segments themselves vary by the specific movements involved and by the number of dancers per segment, but stylistically it all fits because the style is the same (it’s like changing the order of sentences in a paragraph) and because the music, Activities for Orchestra by Toshi Ichiyanagi, allows for a measure of variation from segment to segment. The musical segments (performed to a live recording) don’t suggest anything specific, and Cunningham’s movement suggests nothing specific either. You don’t “see” the music in the choreography; at most, the music provides a frame into which the choreography fits.

Like other Cunningham pieces I’ve seen, and regardless of the segments’ order of presentation, there’s no emotional involvement between the dancers in any particular segment or between the dancers and the audience. It’s all very detached. But what can be appreciated, particularly as presented, is the variety within the seeming absence of variety. One may not be able to isolate one segment from another all the time, but there are differences between them – some subtle; some obvious – that carry the movement far beyond being movement for movement’s sake. One may not like that there’s no apparent purpose to the dance beyond exploring the parameters of movement, but the segments that comprise Scramble share an economy of presentation and a simple purity that, if not compelling, is at least not boring.

And in some of these Scramble segments, there’s considerably more afoot than being “not boring.” Within the context of Cunningham’s style, Scramble brings something missing from other pieces I’ve seen: elements of surprise. The constant movement and generally rapid pace may appear choreographically simple, but within segments Cunningham augments an initial quality that might initially appear repetitious and … boring to watch, with others, cuts and pastes one set of movements into another, and has the dancers entering and exiting the stage area in different combinations in a process that, to an audience, looks unpredictable. And while there remains no emotional component, one or more of these segments include actual physical contact and partnering between the dancers as well as solo bravura execution – that make some segments or parts thereof exciting (another word I never thought I’d use to describe a Cunningham piece). The iciness I sense when viewing what I considered to be a typical Cunningham dance; the posing in points in space without awareness that several dancers may be in the same performing space at the same time, is not at all the prevalent ambiance here. Indeed, that there is some semblance of a prevalent ambiance here is thrilling. 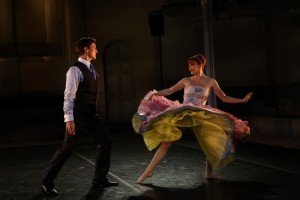 This sense of variety is amplified by the costumes, with each of the eight dancers assigned a particular color, and the set – a series of “banners” of varying widths, lengths, and color combinations that are bound to the tops of support poles, giving them the look of footrace finishing line markers – from time to time are moved to varying positions during the course of the dance for no apparent reason than, maybe, to signify the end of one segment and the beginning of another. The sets and costumes were originally designed by Frank Stella, and reconstructed here, respectively, by Will Viera and company member Carmella Lauer.

Although each of the eight NYTB dancers executed superbly, three had moments that made them stand out more than others: Lima and Faria, neither of whom I recall seeing with the company previously, and Erez Milatin, all imbued their roles with a sense of the individual that I’d not previously seen in a Cunningham piece, and Milatin, an Israeli émigré who joined the company last year after several highly reviewed (by me) seasons with Gelsey Kirkland Ballet, visibly injected qualities of animation and individual accomplishment into Cunningham’s choreography that made him stand out. Simply put, he had an intensity, the precision, and the buoyancy to make Cunningham’s choreography, grounded as it may be, fly. 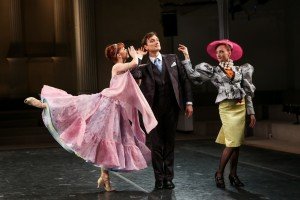 You’ve got to love a piece choreographed to seven of the Rules set forth in Strunk and White’s The Elements of Style – or at least be inclined to overlook its flaws. With tongue only partly in cheek (writing style is serious stuff), Matthew Nash, a frequent choreographic contributor to NYTB over the years, created the music, as well as the choreography, to seven of Strunk and White’s stylistic principles. Created in 1981 for a NYTB program at the Riverside Dance Festival, it’s a little unfocused, and not nearly as concise as Strunk and White, but it’s fun.

Each of Nash’s Rule visualizations includes some examples from Elements, and these examples form the bulk of the choreography, which is supposed to provide visual commentary to the Rules and Examples. I confess that at times I couldn’t see any connection between the choreography and the principles being expressed, but I also confess that just seeing a dance that celebrates writing principles I grew up with, some of which I defend in the face of serious threat to life and limb (Rule 1: “Form the Possessive Singular of Nouns by Adding Apostrophe S” – even when the singular noun ends in “s”), and some of which I can’t help but ignore (Rule 6” “Omit Needless Words”) proved irresistible. If nothing else (and there’s a lot “else”), Nash’s effort impresses with its audacity to even attempt to convert writing style rules into a piece of dance theater. Elements is many things, but it’s not Shakespeare.

Treiber carried the laboring acting oar, portraying a multitude of put-upon characters weighted down, or effectively impaled, by rule breakers, while Dawn Milatin overcame a tendency to look bland, and fortified her genteel ante-bellum-ish character with vivacity and coquettish charm. Stewart’s characters were more difficult to define – mostly they were comic foils – but he handled the assignment well. And Guest Artist Dirk Lombard delivered the narrative (which, commendably, was provided to the audience in a program insert) crisply, giving the piece an added touch of class – and he handled his dancing assignment with aplomb. 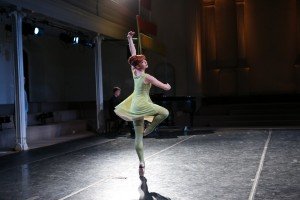 The program’s final component, Alston’s The Seasons, was a bit disappointing, but not through any choreographic fault. With that title, I anticipated something more lighthearted (something more akin to Jerome Robbins’s The Four Seasons), and having seen other Alston pieces, I didn’t expect one as obviously Cunningham inspired.

But not all is lost – instead of seasonal set pieces, Alston and the music (John Cage’s 1947 eponymous piece) provide a continuous flow and an appropriate sense of circularity to the subject, including not just the seasons themselves (expressed in solos, duets, and groups of varying composition), but also transitions in between. Andino-Nieto was a dominant Winter, Faria and Stewart a lively Spring, Branagan and Erez Milatin a sultry summer, and Andino-Nieto, Treiber, Steward, and Faria danced a fresh Autumn, with Dawn Milatin, a group of women, and a group of men providing the inter-season preludes. And as in reality, there’s considerable overlap – characters representative of one of the seasons will linger into the next, or briefly join another season’s representatives. Even though the movement quality is less engaging than I’d have liked, there’s no denying that seeing Winter portrayed primarily in powerful, outstretched poses (by Andino-Nieto), and seemingly to be present even when he’s no longer in command, has particular impact in the context of this year’s winter that won’t die.

Like The Seasons, the program flowed seamlessly from one piece to the next with the inclusion of live instrumental “Interludes.” In the first, Music Director Michael Scales on piano, and Guest Artist Ron Wasserman on bass, delivered an appropriately jazzy and finely executed performance of Duke Ellington’s Pitter Patter Panther, Take 1 (composed in 1940). [Scales and Wasserman also provided live accompaniment for The Elements of Style, and Scales alone accompanied The Seasons.] In the second Interlude, Scales performance of Henry Cowell’s The Snows of Fujiyama (1924) was both mesmerizing and riveting.

I look forward to NYTB’s continuing its mission in the future, including revivals of neglected dances and ballets, and the nurturing of new choreographic talent. But this kick-off to the company’s fortieth anniversary year, and its recognition of the Cunningham Centennial celebrations, was both an apt undertaking and a successful one. The company remains one of New York’s venerated gems.