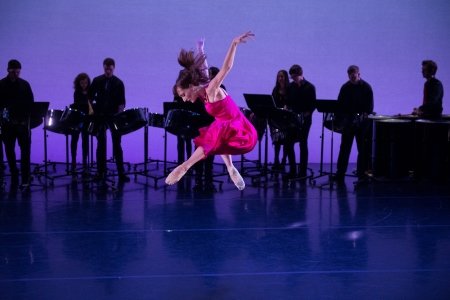 It’s been a very busy ballet week in New York. Between New York City Ballet, Pacific Northwest Ballet, and a visit by members of the Mariinsky Ballet, not to mention the smaller companies that populate New York’s theatrical nooks and crannies, little time exists for an avid dancegoer to see it all. But missing one of New York Theatre Ballet’s Legends & Visionaries presentations is unthinkable. So I squeezed in a performance of its current program Saturday afternoon. As usual, the company, and the choices made by Artistic Director Diana Byer, did not disappoint.

While each of the pieces has considerable merit, the last two are particularly significant.

The return of Robbins’s Antique Epigraphs is cause for celebration – a comment I’ve made about most of NYTB’s resurrected classics. I was in the audience at its New York City Ballet premiere in 1984, as well as at more recent NYCB presentations, and thought I vividly remembered details of it. This NYTB revival, as well as the intimate environment of the Live Arts Theater, allowed me to see not only that I didn’t remember it as well as I thought I did, but that I had overlooked its substance and remembered only a part of its form – the most obvious part, that has the eight-woman cast assume positions that mimic depictions of women on ancient Greek friezes and art-embellished urns, and then bring those poses to life. NYCB rarely performs this little gem; perhaps this NYTB incarnation will give it a nudge.

Robbins has always impressed as infusing his ballets not only with impeccable craftsmanship, but with a sense of humanity. He lays the souls, and the spirits, of his characters bare, regardless of the immediate framework of the particular ballet. Here, inspired by Six épigraphes antiques for piano, four hands by Claude Debussy (completed in 1914), which in turn was inspired by a collection of erotic poems, Les Chansons de Bilitis, written in 1894 by French poet Pierre Louys and initially promoted as newly discovered ancient Greek compositions by a student (and presumably lover) of Sappho, Robbins turns his attention to women’s relationships with their own sensuality, freezes them in an anonymous, emotionally ambiguous context, and concurrently frees them to be themselves.

But Robbins is doing more with Antique Epigraphs than just visualizing individual romanticized female sensual expression or implied lesbian relationships; he’s commenting on the commenting on them (as Louys and Debussy both did), and camouflaging depth of feeling in the deceptive simplicity and delicacy of the piece’s movement. The women in Antique Epigraphs shout, but shout quietly.

Bracketed by the visual allusions to ancient poses, Antique Epigraphs initially presents a loosely-defined circle of women wearing flowing, diaphanous gowns of soft, muted colors worn over pale leotards, dancing in relative unison – the frieze, animated. From this circle, individual or smaller groups break apart to dance separately while largely maintaining their classical demeanor. The movement is slow-paced, as if the dancers are trying not to draw attention to themselves, but occasionally erupts with discretely controlled passion. These dances are a perfect complement to the subdued sense of serenity conveyed in Debussy’s music, and particularly in the flute piece Robbins selected to conclude the dance, Syrinx for solo flute, which adds an enigmatic and oriental twist: part mystical snake dance music, part sensual musical foreplay. 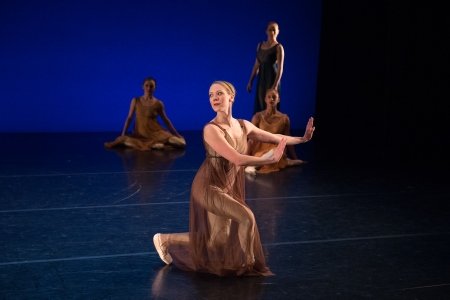 With the attention to detail and nuance that the staging by former NYCB principal dancer and member of the original cast Kyra Nichols provided, the NYTB dancers gave Antique Epigraphs a portrayal that forced me (not unwillingly) to see the emotions beneath the surface that I’d not remembered before. Elena Zahlmann began the first of several lead solos with a display of overt dynamism that contrasted vividly with the group dances that preceded it, and Amanda Treiber, who had particularly extraordinary performances throughout the program, ended the solos with a more detailed rendering of the persona she had communicated earlier in the piece, demonstrating restrained passion, somewhat aloof and aristocratically distant, but simmering. Carmella Lauer and Mayu Oguri completed the four leads, and all were abetted by Alexis Banagan, Giulia Faria, Chloe Slade, and Amanda Smith. The execution, as is usually the case with NYTB, was impeccable. The live musical accompaniment was flawlessly provided by NYTB’s music director Michael Scales and Zheng Ma on piano, and by Mira Magrill’s masterfully seductive flute.

I enjoyed Song Before Spring a great deal, but have difficulty explaining why. There doesn’t seem to be logical consistency to what passes for the dance’s narrative or to its hodgepodge choreography – all indications of a ballet by committee. But somehow it all works, and has an overriding energy that’s palpable. It also shows remarkable vision on the part of Byer, who I understand selected the music, and then assigned the emerging choreographers, who had not previously worked together, to construct the piece.

A large part of the reason Song Before Spring works is the musical accompaniment: Piano Etudes Nos 1-10 by Philip Glass, arranged by Josh Quillen, director of NYU Steel, a fantastic group of a dozen percussionists who performed live, spread horizontally upstage in a silhouette haze as the piece unfolds in front of them.

The focus of Song Before Spring, to the extent there is one, is on life in an urban jungle, and more specifically attempts to establish relationships within that environment: dances at urban gatherings (a bar or two, a rooftop or basement lounge, a subway station, a street corner, or all of the above), including passing visual portraits of people involved, and snippets of what might motivate them to act as they do. For example, after a bustling introductory sequence, Melendez is first seen as somewhat of a Travolta-like character, irresistible to himself; Treiber is the woman apparently in search of a relationship, whether she knows it or not; and Branagan, who seemed to have the most fun role in the piece, as a sort of instigator/motivator/mean girl/millennial yenta. But their ‘roles’, to the extent they can be seen as roles, aren’t internally consistent, and seem to disappear as soon as the viewer discerns them. And the movement quality reflects this consistent inconsistency: ballet vocabulary fused with other ‘stuff’ that fits the overall angst: twitches (lots of them), body sways, incompatible hand and foot positions, and even a mock-threatening bite or two, that don’t lead anywhere, abound. And yet, this seemingly kitchen-sink vocabulary works – the way life in an urban environment somehow works.

The piece is more diffuse than I would have liked, lasts a bit too long, and there was considerably more going on than I could visually capture in one sitting. Regardless, Song Before Spring is cleverly put together, fun to watch, and, most importantly, represents an auspicious choreographic debut for both nascent choreographers.

Bradley’s Chemical Bond, which opened the program, is a brief ballet to dreamlike music by Gabriel Faure (Serenade op. 98, and Apres un Reve) that is evocative of a warm, gentle relationship. The relationship depicted, however, is a threesome of sorts (Treiber, Oguri, and Joshua Andino-Nieto), and although the movement quality matches that of the music whether the dancers are paired or together, the interplay raises other issues. At times I thought I was watching a relationship game, with two women involved with one man – an updating of Nijinksy’s Jeux. Or perhaps, given the piece’s title, it’s a romanticization of a chemical reaction among three distinct elements. Regardless, and although the partnering was a bit muddy at times, Chemical Bond is a lovely and deceptively simple-looking piece. Scales handled the piano with his usual aplomb, and Amy Kang’s cello playing was magnificent.

Also lovely and deceptively simple-looking is Such Longing, a beautifully crafted and executed set of duets for two couples (Treiber and Melendez; Zahlmann and Michael Wells) originally choreographed by Richard Alston for his own England-based company in 2005. This NYTB presentation has been updated with additional choreography, and restaged for NYTB by Martin Lawrance. Although it’s choreographed to Chopin piano music, Such Longing is not just a sequence of dances that Robbins might have added to his Other Dances. Rather, the passionate duets include simmering emotional undercurrents of desperation, as if the couple is aware that their passion, for whatever reason, is impossible to sustain. The contrasting emotional messages convert Such Longing from being just another Chopin piano ballet into one that is different and strangely invigorating, but at the same time heartbreaking to watch. In program notes, Alston thanks the NYTB dancers for bringing new life to the piece and making it their own. That they most emphatically did.

One final note. Every company, it seems, must endure a dead audience from time to time. So it was on Saturday afternoon, with excellent work that usually merits immediate applause or, in current fashion, yelps and whoops, met with stony silence until the particular dance ended. The dancers deserved better.

Pacific Northwest Ballet: All or Nothing