I expected to like Christopher Wheeldon’s American Rhapsody, which had its world premiere at New York City Ballet’s Spring Gala on Wednesday. After all, what could go wrong? One of the leading lights of contemporary ballet choreography, matched with a composition by George Gershwin (whose music Wheeldon adapted visually with astonishing success in Broadway’s An American in Paris), matched with the same lead dancer as in that Broadway show.  And the music itself: the iconic, and beloved, Rhapsody in Blue. I was so certain that it had to be a success that, after seeing it at its premiere and not particularly enjoying it, I held off writing a review until I’d had the opportunity to see it again. I thought maybe it was me, and seeing the ballet from a different viewpoint might change my opinion.

And, at last night’s program, it reintroduced me to Justin Peck’s Belles-Lettres, a ballet that I reviewed in depth following its premiere at NYCB’s Fall, 2014 Gala, but hadn’t seen since.  After that initial view I’d concluded that Belles-Lettres was triumphant on multiple levels.  That conclusion now requires some revision.  Abetted by extraordinary performances by all four pairs of dancers and one who dances primarily solo – the original cast – and particularly by the consistently remarkable Lauren Lovette (how she manages to clearly exhibit such a variety of emotional and physical nuances in one short, plotless ballet is beyond my comprehension), Ashley Laracey’s seamless golden fluidity, and Anthony Huxley in one of his most physical and complex roles, I see Peck’s ballet now as being more than simply triumphant.  It’s one of the few ballets that I’d want to see over and over again…even in the same week, and a contemporary, narrative-free piece that I’d recommend without hesitation equally to ballet lovers and ballet novices.  It’s every bit as wonderful as his Year of the Rabbit and Everywhere We Go, but in a very different way.  Belles-Lettres is a ballet not just to admire and appreciate and to cheer for its inventiveness and for the sheer joy of seeing a marvelous work of art.  It’s all of that, but it’s also a ballet to cherish. 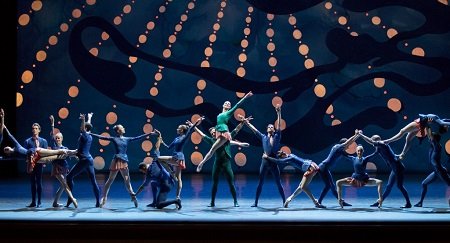 The best thing about American Rhapsody is Gershwin’s music. It’s also, through no fault of Gershwin, what makes the ballet not work. Essentially, Wheeldon has simply (or not so simply) taken the music literally, and mirrored it visually.  Every time something happens in the score, you see it translated into movement. Every nuance, jazzy counterpoint, or humorous interjection is reflected visually.  Indeed, the most surprising aspect of American Rhapsody is that there are no surprises.

And perhaps an even greater failing than this is that Wheeldon makes his ballet generic American. This is an abstract ballet with very little in the way of emotional gloss, but in showing what the music looks like, he leaves a lot of what makes Rhapsody in Blue so great in the orchestra pit.

Though timeless, Rhapsody in Blue, the landmark 1924 composition which Gershwin completed in a month (and which was originally called American Rhapsody), is a creation of its time. Nothing in the ballet reflects this other than the choreography’s reverence to the score.  But Rhapsody in Blue is also a creation of its place. It’s not just a reflection of the United States in the post-Great War Jazz Age, but also, and indivisibly, of New York City (and particularly Manhattan) at that same time. One can feel the city pulse and urban bustle; one can see the rush to beat the light at the street corner or to catch a cab or push onto a train or subway before someone else does, to invent or experiment with new things – and new freedoms, to make a million, to be first. Unlike An American in Paris, there’s nothing in American Rhapsody that captures this. 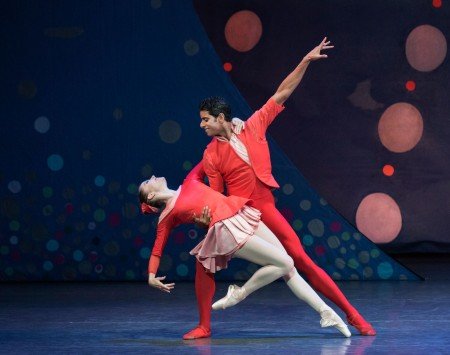 For Phelan, one of the many members of the corps who have been given significant leading role opportunities this year, Wheeldon has provided his most emphatic and free-spirited choreography – as if she alone was emblematic of the Roaring Twenties. All legs, torso, arms, and smile – held together by boundless energy – Phelan’s is the one character who is given choreography that takes the music to a different, higher level. She’s not a sprite, but in this piece she has an exciting, infectious stage persona; she’s a joyful flag that is a pleasure to watch unfurl. And she excels as well in the brief interaction with Tiler Peck, the other female lead. To see this member of the corps hold her own with Peck (as well as with the two male leads, Amar Ramasar and Robert Fairchild) is somewhat miraculous.

Watching Peck, Fairchild (Wheeldon’s lead in An American in Paris), and Ramasar excel in whatever they’re given to do is not unusual, and they do here. But (with the possible exception of Ramasar) their roles were more circumscribed to reflect the jazzy tones in the music rather than its ebullience. And even in the score’s most unexpectedly soaring and serene moments (the part where all of a sudden Gershwin shifts from describing, musically, the business of living in what its denizens had come to believe was the greatest city in the world, to describing two people in this budding metropolis as they stop to inhale and gaze quietly at the star-lit night sky), the choreography doesn’t soar with it.

It must be emphasized that Wheeldon’s choreography is not difficult to watch; it’s just not as independently inventive as it might have been, and needed to be. The set and costumes are another matter. The set – a huge backdrop framed by opposing semi-circled frames – is awful. I have no idea what set designer Leslie Sardinias was trying to do here – maybe something that simulates the track of fireworks representative of the Jazzy Roaring Twenties; maybe something as different from the sets for Who Cares? as she could envision – but it looks like a giant exotically colored sea urchin until, during the ballet’s conclusion, the frames ascend (for no particular reason) to reveal the sea urchin design flattened across the back of the stage. And I’ve usually enjoyed the costumes that former NYCB principal Janie Taylor has designed, but here she uses a color palette that not only makes no sense to me, but that looks garish. The corps is dressed in blue, with the women wearing ‘cheerleader-like’ skirts in light red and white. Cool, I thought – American flag colors. But the leads are dressed either in deep orange or green (kelly green? Gene Kelly?), so when the leads occupy the stage by themselves, they clash with each other, and with the corps.  The only things they complement, sort of, are the colors of that giant sea urchin on the back curtain.

American Rhapsody isn’t a bad ballet. Perhaps a third and fourth viewing will make it appear less unsuccessful. But if that doesn’t happen, I’d encourage potential viewers to see the piece anyway – if for no other reason than to be transported as the superb NYCB orchestra, with Cameron Grant at the piano, rhapsodically plays Rhapsody in Blue.

Blanc is a French-born choreographer who is a former principal dancer with San Francisco Ballet, and is currently a Ballet Master and Principal Coach for the Joffrey Ballet. Mothership, Blanc’s first work for NYCB, was developed during last fall’s NYCB-affiliated New York choreographic institute. It’s different, and quite good.

I’ve not seen other pieces by Blanc, but here he has created a contemporary ballet that looks and sounds somewhat futuristic – in more ways than one. Mothership is choreographed to a 2011 composition of the same name by Mason Bates, who is currently composer-in-residence for the Kennedy Center for the Performing Arts. The music is combined orchestral and electronic, and listening to it evokes images of the Starship Enterprise. To me, that’s not a bad thing. And Blanc uses some of the newest company dancers – and several not yet members of the company, adding further to the futuristic sense. These dancers are not stars now, but may well be in the future. And the costumes, designed by NYCB’s Marc Happel, are deep purple leotards (for the women) and black (for the men) that add to the piece’s futuristic sense – they’re sleek, uncomplicated, and highly utilitarian uniforms that could easily have stepped, or danced, out of a Star Trek (The Next Generation) episode.

With these ingredients, Blanc has choreographed a piece that is constantly in motion, consistently surprising, and – unless you’re completely turned off by music that’s turned on, or by choreography that’s an intriguing combination of angular, edgy, and yet somehow lyrical and highly balletic – consistently exciting to watch. There’s an abundance of sudden quick turns and spins that morph into iron-forged arabesques, but in context it all works very well. And Blanc does what few relatively nascent choreographers do: he knows when to stop.

All this having been said, what makes Mothership particularly exhilarating are its young NYCB dancers. Each of them – Jacqueline Bologna, Clara Francis, Claire Von Enck, and Alston MacGill (an apprentice), and Silas Farley, Sebastian Villarini-Velez, Alec Knight, and Christopher Grant (the last two apprentices) – danced flawlessly, except for a toe shoe now and then getting stuck on the stage floor during a slide, with tantalizing speed, the cleanest of lines, and an appropriately stony, unearthly demeanor, and Francis, Knight, and especially MacGill stood out. It seems that NYCB has an unending bounty of budding ballerinas who look like they’re sixteen. Barely.

Concerto DSCH is a well-known quantity familiar to anyone reading this. It’s one of Ratmansky’s best works, and for good reasons a crowd-pleaser. Pollack, Gonzalo Garcia (dancing better than I’ve seen from him in years) and Huxley, and Sara Mearns and Tyler Angle, were all wonderful. Pollack seemed everywhere at once, dancing Ratmansky’s rapid-fire footwork with ease; Mearns delivered a superlative performance in all respects (no Odette pathos here); and Angle is one of the company’s strongest dancers, as well as a flawless partner.