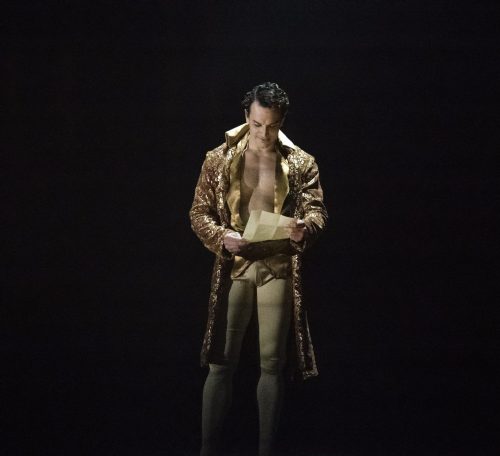 Casanova, celebrated in popular culture for his sexual exploits was also a serious chronicler of his times and a towering intellect of inexhaustible energy. Born 1725, he lived an exciting life in exciting times, Kenneth Tindall’s eponymous ballet succeeds in drawing us into the darkness and danger of the times as well as the infectious lust for life. Casanova is in the tradition of strong narrative works that form the backbone of Northern Ballet’s repertoire. It provides a slew of dramatic roles for a company of strong actor dancers and a central role that gave a fitting finale to an exceptional career: that of Javier Torres, Cuban born Premier Dancer. He is centre stage for much of the evening, a dancer at the height of his powers and delivering a performance of intense emotion.

The opening scene is in the cavernous depths of a cathedral where shards of light pierce the incense laden gloom. The authority of the Church is all pervasive with venality and devotion as dynamic elements in the power balance. Torres as Casanova, moving fluidly between favour and outcast, cuts a powerful male figure as he rejects the powdered wig, favoured by the majority in high society. Whatever his status, he is a man of destiny, his intense drive and charisma singling him out for attention, either for favour or retribution. Drama is never far away in this period of masquerade and disguise, celebrated in Christopher Oram’s extravagantly beautiful designs. 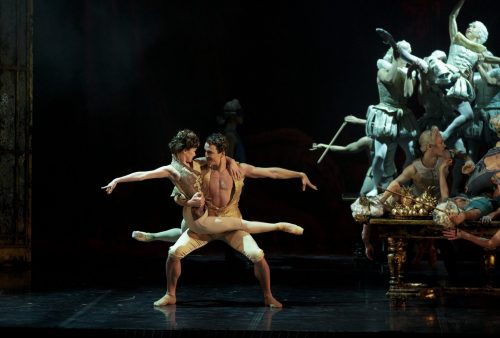 Based on Ian Kelly’s biography, the narrative is complex, foregrounding Casanova’s love affairs and weaving in a background of famous figures including Voltaire and Mme de Pompadour. Tindall has paced the drama with keen intuition, spending time over important moments and neatly short handing the history when necessary.

Tindall’s dance language is flexible and nuanced. The violinists display their virtuosity in quick fire batterie, the novice priests spell out their devotion in powerful ritual and Casanova demonstrates his intellectual dexterity in a bewildering entanglement of arms. However, it is in the pas de deux that the work finds its soul. Each encounter has a different flavour. His deflowering by the scheming Savorgnan Sisters, has comic overtones, his invitation from M.M., Abigail Prudames, was a feast of sensual indulgence as she stripped down to display her athletic prowess. The two later duets, first with Bellino, Minju Kang, disguised as a boy to join the musicians and then Henrietta, Saeka Shirai, disguised as a soldier to escape a brutal husband are sensitively drawn. With Bellino there is shared love of beauty in art but with Henriette there is true emotional depth, the real thing. Sadly, this love is not to be and a desperate Casanova is finally saved by his love of philosophy and learning.

David Nixon, who has directed Northern Ballet so successfully over two decades has stepped down and Federico Bonelli, former principal dancer at The Royal Ballet, steps up to the helm. He inherits a company in fine condition, an enviable repertoire and an army of loyal fans, as this is one of the UK’s most popular ballet companies.