Les Liaisons Dangereuses, published in 1782, was an instant success. The novel was still in its infancy but author, Pierre de Laclos, had already discovered the selling power of seduction and sex. Set in a society of rigid conventions that ensured the prize would be even more desirable, the game is on. However, it’s a pretty unsavoury tale of two people with too much money, too much leisure and a distinct paucity of morals.

The story has been retold in many versions in film and on stage, and dance, that ‘vertical expression of a horizontal desire’ (attributed to Oscar Wilde amongst others) seems one of the most suitable. David Nixon, choreographer and director of Northern Ballet has adapted the ballet to suit the Covid restrictions. Predominantly in a series of pas de deux, the deception takes a different character with each encounter. 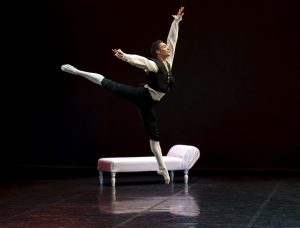 The original tale is told through letters between the Marquise de Merteuil and Vicomte de Valmont, a sadistic game of one-upmanship that treats others as pawns, to be bartered, won or lost. The ballet relies heavily on the charisma of the pair. Sarah Chun as the Marquise is fire and ice, cut-glass technique, haughty demeanour and simmering emotion. Riku Ito as the heartless Valmont is a master at turning on the seductive charm and given the chance he leaps and spins in virile display. He toys with the virginal Cécile de Volanges, (Miki Akuta) leaving her devastated and confused, her young life ruined as he notches up another easy conquest.

The young music tutor, Danceny (Kevin Poeng) is a proper gentleman, his neat batterie hitting all the right notes. His first restrained pas de deux with Cécile, is watched by the Marquise like a lioness waiting for dinner. She entraps him in a sensual liaison, a fluid and skilfully choreographed pas de deux of beauty and dominance. However, it is the duet between the Marquise and the Vicomte that is, in some ways, the most honest, two intelligent schemers who know each other’s every flaw. 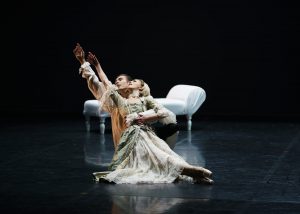 The seduction of Madame de Tourvel proves the greatest challenge. Played with warmth and honesty by Ayami Miyata, she eventually succumbs to Valmont’s charm. In a respite from duets there is a brief interlude, a sort of quadrille, the Marquise in the centre while Valmont, Tourvel, Cécile and Danceny circle round, swopping places and finding different relationships in this stew of sexual partners. The fearsome awakening of real emotion brings change. Tourvel breaches Valmont armour of duplicity and the fraudulent edifice crumbles leading to Valmont permitting his own death at Danceny’s hand. 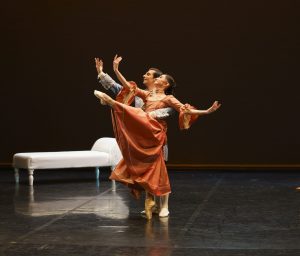 are in great form, their joy at being back on stage enriching their performances, but perhaps the drama misses the subtle barbs that language offers for it never reaches that seriously dark place that defines the play. It remains a rich and exciting ballet and the addition of the Northern Ballet Sinfonia, playing Vivaldi added greatly to the pleasure of the evening.