Cathy Marston is riding high with her very successful adaptations of nineteenth century literature. This time she turns to the diaries of Queen Victoria, who lived through so much of the century. Victoria dutifully wrote up her diary through her long life and it became a lifetime’s work for her youngest daughter to edit them after her mother’s death. With so intimate a relationship the tantalising question remains of how much has been removed or altered.

Catching up on two alternative casts showed the strength of David Nixon’s Northern Ballet. The ballet has a full cast of characters and the company has plenty of dramatic artists to fill the roles with each performance adding a different mix to the blend. The narrative does not run chronologically. Marston choses to draw focus on specific episodes as Beatrice rediscovers her young mother’s world. The costumes are effectively employed to show the younger or older characters and the story is remarkably coherent. 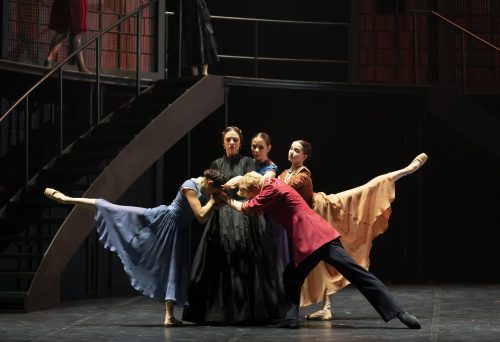 While Victoria has the lion’s share of dance, it is the unobtrusive, omnipresent Beatrice who cements the work. The most emotional moment comes at the end of the first act in a pas de trois where the older Beatrice, eavesdrops – in a physical manner of speaking – on her young self as she meets, marries and loses, all in quick succession, Prince Henry of Battenberg, the love of her life. Nina Queiroz da Silva captured Beatrice’s quiet strength perfectly, complemented by Ayami Miyata as her younger self. The evening cast saw Mariana Rodrigues and Rachael Gillespie in the roles with Jonathan Hanks giving a dashing interpretation as the Prince. I loved his gleeful cabrioles! The trio is choreographed with delicacy and passion, every nuance of their short-lived love finding expression.

The clever set with an upper level and staircase accommodates the variety of scene changes. The ballet opens on Victoria’s deathbed, Beatrice by her side, the stacks of diaries already in evidence. The ensemble, identified as archivists, are effectively and busily used amongst the shelves. The score by Philip Feeney, a long time collaborator, reimagines the romantic music of the period but also extends into electronic realms to capture the scratch of a metal nib on paper. 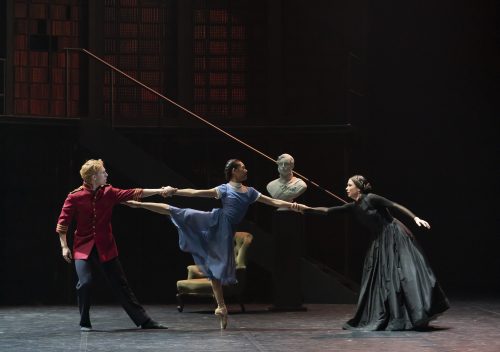 The ballet moves up a gear with Victoria’s well documented relationship with ghillie, John Brown, identified by his tartan kilt, but rather more boorish than recent filmic interpretations. Gavin McCaig gave a convincing performance and his passionate duet with Victoria has Beatrice removing pages from the diaries. Marston departs from romantic notions of ballet pas de deux and Victoria and Albert’s wedding night dispenses with Victorian demureness in a duet of touch, exploration and indecorously splayed limbs. Beatrice again responds by tearing pages from the diary.

It is in the second act that we meet the passionate young Queen as she travels back in time, emerging from her black mourning dress in radiant white to reveal a strong-willed spirited young woman only temporarily unsettled as she steps into her position of authority surrounded by black suited ministers of state. Minju Kang, in the matinee cast, gave a remarkable performance in the title role. Without losing the energy and affectionate nature of the character she added depth and gravitas to the character, evidence of an inherent sense of duty which brought the British Royal family back to public acceptance. However, I felt the factory-line delivery of her nine children, introduced a risible tone that was at odds with the rest of the ballet. Antoinette Brooks-Daw was a more outwardly emotional Victoria, wearing her heart on the sleeve, and giving free rein to her passions in the pas de deux. Prince Albert, played by Sean Bates with Brooks-Daw and Mlindi Kulashe with Kang, is a strangely undefined character, and again it is through Beatrice’s reading as she rediscovers her father through her mother’s diaries, that he most vibrantly comes to life. The long list of royals and ministers of state give ballast to the prolific story of Britain’s longest serving monarch. We can only surmise the emotional truth from the lives of these historical characters, but it does make a lovely story.