In opera houses across Europe, ballet and opera cohabit, sharing facilities but seldom joining forces on stage in equal partnership. In Oslo, Andreas Heise’s production of Dido and Aeneas broke the mould immersing Scene 2, the smaller stage, in music, song and dance as artists joined forces in exuberant Baroque fashion. 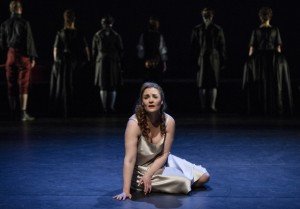 Originally staged by choreographer Josias Priest in 1689 for a school for young gentlewomen, this production diverts from modern minimalist trends in maverick design. Designer Bregje van Balen has created an extravagant fantasy throne in contrast to the elegant period dress that alternates with modern dress and dancewear. Then there is the sheer delight of the peripatetic Baroque Soloists under leader Bjarte Eike, as they carry their instruments around the stage to embrace the action.

In this compact operatic gem, the path of true love leads a decidedly convoluted path. Henry Purcell and librettist Nahum Tate adapted Virgil’s epic poem to create Dido and Aeneas, shifting the source of malicious intent from the gods to the witches. Heise takes this a step further by removing the supernatural element and shifting the malevolence to conniving humans who set in motion a chain of events resulting in Dido’s tragic death.

The characters of Dido and Aeneas each have a dancer and a singer persona and a flexible interchange between the two. Dido, despite her queenly status, is defenceless against Prince Aeneas’s charm. Her vulnerability is encapsulated in the delicate form of dancer Heidi Cecilie Baastad Christensen, while her strength is captured by singer, Astrid Norstad, most impressively in her deeply moving Lament. Aeneas is a complex vacillating youth, singer Mikkel Skorpen opens the action rolling onto the stage locked in the arms of the sorceress before moving on to a richer prize. Dancer Aeneas, Shaakir Muhammad, a powerful performer, is the more grounded and a stabilising force. Heise has joined their differing male energies in a duet that crosses boundaries and probes personal spaces. 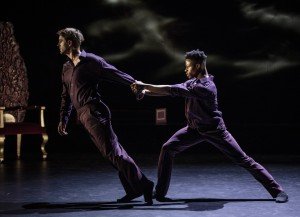 The evening is full of such surprises. The Sorceress, Désirée Baraula, a charismatic personality with a mane of dark hair, is more interesting and complex than common interpretations of evil. She helps to prepare the charm in the ‘deep, vaulted cell’, but her anger derives more from hurt and rejection and she, most unusually, expresses regret at the outcome of her actions. In the final scene Dido is clothed in the Sorcerer’s black dress as she prepares for her death in an ambiguous cross-over.

In contrast the ‘faithful’ Belinda, Dido’s handmaid, (sung by Lydia Hoen Tjore) is a traitor and with a partner in crime, singer Eira Sjaastad Huse. The doubling up of the two plotters adds menace to the drama. A brief moment when their mistress is absent, and Belinda sits on the throne preening like the cat that got the cream with the ‘other woman’ by her side, is a study in duplicity.

The dance is multifaceted. The opening processional dance in formal lines in the dress and style of the period gives way to livelier Baroque dance full of nimble skips and neat batterie. Later the dancers perform in neo-classical style in nude bodytights as exquisitely refined as Bernini’s sculpted shapes. The pairings continue to intrigue and excite: Baraula bearing the weight of Christensen as she carries her on her back, duets with a singer and a dancer and the space between and round filched by the Baroque Soloists. 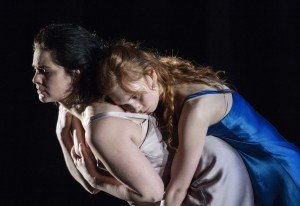 There is a case for viewing Dido and Aeneas as a political allegory in England of 1689, a newly re-established Protestant country with a tendency to build conspiracy theories against the feared Jesuits. It was a period when liberalism was emerging as a reaction to the idea of natural hierarchy. Throughout the opera, order and chaos tread a precarious balance as individuals subvert and turn the tide of events to suit their own purpose. This was a youth production: the dancers are all members of Norwegian National Ballet 2, while the lead singers are drawn from the Norwegian National Opera’s apprentice soloists. It is significant that the work was staged for young artists as they are the ones who will be shaping our new world order in these turbulent times.