Rudolf Nureyev’s magic shone brightest on the stage. Further, his ability to work with and bring together dancers and choreographers and relocate repertoire across the dance world was a gift that continues to have benefits. A charismatic personality, he changed the way we perceived male ballet dancers and inspired thousands. It is difficult to underestimate his legacy.

Nehemiah Kish, presents a gala that thrillingly reproduced some of this magic, staging it at the Theatre Royal, Drury Lane where Nureyev, dancing with Margot Fonteyn, was first presented to London audiences. The choice of repertoire – each piece having a strong connection to Nureyev – and the selection of top international talent heightened the pleasure of the evening.

The Grand Pas from Le Corsaire, so strongly associated with Fonteyn and Nureyev, performed now by Cesar Corrales and Jasmine Naghdi, closed the evening and ratchetted up the already outstanding performance level of the programme. Corrales, with a dark and dangerous edge balances Naghdi’s radiant grace and poise. Technically they were faultless and there was that touch of something special that was part of the Nureyev persona sending an audience home on a cloud of nostalgia. 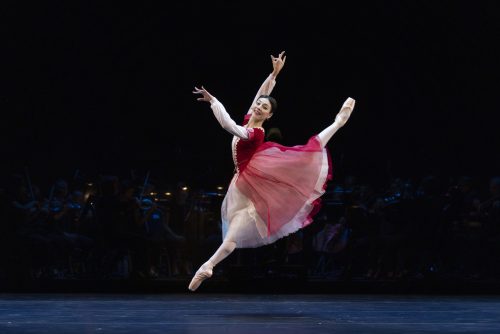 It was a delight to see little performed works like Gayané Pas de Deux. Georgian, Maia Makhateli guesting from Dutch National Ballet and Ukrainian, Igor Ivenko captured the easy folk charm beneath the virtuosic structure. Ivenko, who played Nureyev in Ralph Fiennes film, The White Crow, added powerful muscularity while Makhateli’s brilliant pointes gave the sparkle. Also little known in London is John Neumeier’s Don Juan which he rechoreographed for Nureyev with the National Ballet of Canada. Alexandr Trusch, as Don Juan, gives his final bravura flourishes but the gentle strength of the always memorable Alina Cojocaru, as the Angel of Death, draws him slowly and inexorably away from life.

Another quiet moment came with the Giselle Act Two pas de deux danced by Francesca Hayward, one of the most poignant of the younger Giselles, partnered by William Bracewell who is fast proving his place in principal roles. 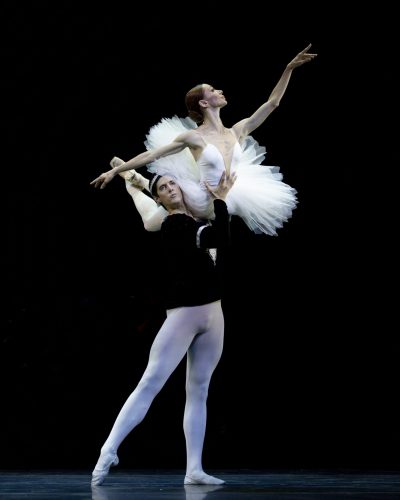 La Bayadére and the beautiful pas de deux in the Kingdom of the Shades brought exciting guests, Iana Salenko, from Berlin State Ballet and Xander Parish, British trained, former principal with the Mariinsky, and currently principal with Norwegian National Ballet. It seems dancers are still defecting from Russia. Salenko, has those gorgeous pedigree legs that extend and fold into textbook shapes with natural ballerina grandeur while Parish seems to have added a touch of Nureyev bravura to his fine technique.

Nureyev raised the bar for male ballet dancers and the Act 2, Entr’acte solo he included for the Prince in The Sleeping Beauty is a masterclass in technique. It is quite terrifying in its demands and was given a fine showing by Guillaume Côte. Nureyev staged the ballet, which represents the high point in classicism, for many companies. The Grand Pas was danced by Natasha Mair from English National Ballet and Vadim Muntagirov from the Royal Ballet. Muntagirov was on top form, elegant and totally at ease, perfect for the role. Mair’s Aurora was strong and secure, but it took until the coda, the two dancers impeccably coordinated, before the electricity sparked. 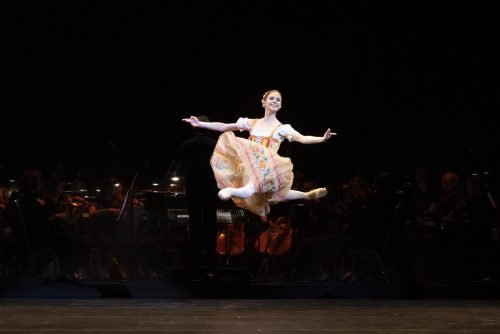 The light-hearted and fearsomely difficult Flower Festival in Genzano brings to mind Nureyev’s deep friendship with Erik Bruhn. Francesco Gabriele Frola gave a showstopping rendition of the solo with Bournonville buoyancy, crystal clarity of the beats and faultless pirouettes dancing with Ida Praetorius, Danish trained and utterly charming. The Laurencia Pas de Six brought more fireworks with Natalia Osipova in brilliant form with bounding jetés, partnered by Corrales whose virtuosic tours were off the scale. Galas are usually exciting affairs but this one, like the dancer it honoured, was something special.