Easy
In the Night
The Runaway
Something to Dance About: Jerome Robbins, Broadway at the Ballet

NYCB’s Program B was even more diverse than Program A, and it ignited more passion from the audience as well. Justin Peck’s Easy, to music by Leonard Bernstein, is bouncy and fun. It makes a snappy tribute to both Bernstein and Jerome Robbins. The cheerful pink, yellow, and blue of the casual costumes, even the sneakers (by Reid Bartelme and Harriet Jung) and set (scenery by Philadelphia street artist Stephen Powers) positively pop, as does the chipper dancing. Christopher Grant, a member of the corps, really shined, and added a ton of charm to the work. The dancing in Easy is playful, theatrical, jazzy. Dancers exchange broad conspiratorial smiles. 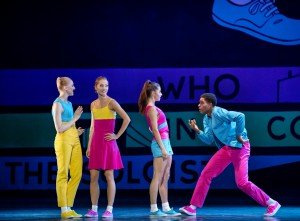 Robbins’ In the Night, to music by Frédéric Chopin, isn’t one of the chirpy Robbins’ pieces, it’s elegant. Three couples (Ashley Laracey and Alec Knight; Emilie Garrity and Ask la Cour; Brittany Pollack and Peter Walker) in different stages of a relationship dance under a single starlit sky. They’re introduced individually, and then they all meet together at the end of the work. The first couple, Laracey and Knight, seem to be infatuated with each other, beginning to fall in love. They were my favorite of the three couples. She floated as lightly as her gossamer lilac skirt, and he glided along with her, the two mirroring each other’s movement. Definitely a fairy tale romance! The second couple seemed more grounded, having already passed the falling in love stage. Garrity was swept up by la Cour in a dazzling lift and was turned completely upside down, so that her feet were vertical beside his head. The third couple, Pollack and Walker, fight, but even when they move away from each other, they’re drawn back. At one point Pollack leaves Walker, exiting the stage, only to dramatically leap back into his arms from the wings like a magnet. In the end, the couples nod to each other in acknowledgement — are they different versions of the same couple?

I cannot do Kyle Abraham’s The Runaway justice in a short paragraph or two. It’s so striking and brilliant, it’s awe-inducing. It’s also challenging, both to the dancers and the audience. The Runaway has searing messages about racism and contemporary culture, I think, embedded in it. Taylor Stanley was phenomenal, unforgettable. He began and ended The Runaway, and in my view served as its power source. Dan Scully’s lighting allowed all of Stanley’s muscles to be seen and appreciated. I marveled at Stanley’s control as he balanced, one leg extended high into the air for what seemed like forever. The ripples and shudders that moved through his body, too, were absolutely riveting. 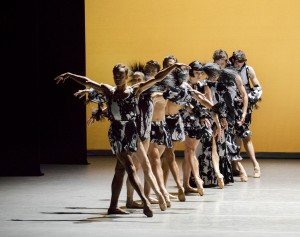 The costumes by Giles Deacon are difficult to describe, but are fantastic. Inky black and white patterns, hair-like headpieces and collars, even one headpiece that rises into the air like a palm tree. I got the sense that the dancers initially represented a tribe of some sort — with unique attributes. As the music moved from Nico Muhly’s classical score into the realm of hip-hop and rap, the dancers became not the original tribe, but members of a group that co-opted movement of the tribe, and robbed the tribe of its innocence. And yet the spirit of tribe remained indomitable. Or something along those lines? I’m not entirely sure what it all means, but I’m sure I loved it. The choreography is gripping and bold, and the dancers were fierce. 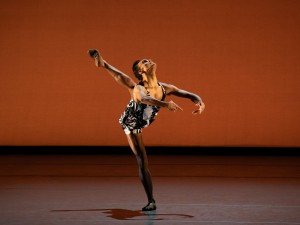 Closing Program B was Something to Dance About: Jerome Robbins, Broadway the Ballet. It’s a compilation of Robbins’ greatest Broadway hits, directed and staged by Tony Award-winning director and choreographer director Warren Carlyle. It’s sort of like a choreographic career highlights reel, performed live. Something to Dance About is sweet and light, vibrant and lovable. Guest vocalist Leah Horowitz sang while dancers moved around her. Is one of the pieces included “America” from West Side Story? You bet. The “Wedding Dance” from Fiddler on the Roof? Yep. 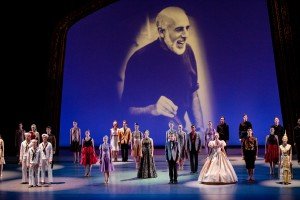 New York City Ballet’s Something to Dance About: Jerome Robbins, Broadway at the Ballet, choreography by Jerome Robbins with direction and musical staging by Warren Carlyle, photo by Paul Kolnik

A video featuring Robbins’ own words kicks off Something to Dance About, and it ends with the dancers turning their backs to the audience and curtseying to a large projection of a photo of Robbins, which is affecting. In between it’s all colorful costumes, lively dancing, songs that stick with you. It was a wonderful way to end a wonderful program.