None of the three Robbins pieces on the program – Interplay, In the Night, and NY Export Opus Jazz – is an unknown quantity. With one exception, they’re not in the same artistic league as Robbins’s greatest pieces, but they’re Robbins dances, so almost by definition they’re on a higher plane than others. Each, in its own way, captures moments in time, and all exhibit that quality of humanity that permeates nearly all of Robbins’s dances.

The one exception is In the Night. 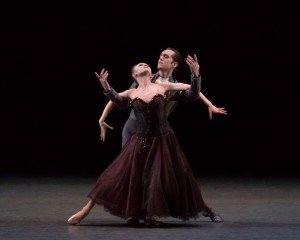 In the Night is a straightforward quiet masterpiece that nevertheless, because of Robbins’s sense of humanity, touches the heart. Following his success with Dances at a Gathering, Robbins revisited Chopin, but this time limited the “gathering” to three couples whose relationships are portrayed privately, hidden in the night. Composed to four of Chopin’s Nocturnes (respectively Opus 27, No. 1; Opus 55, Nos. 1 and 2; and Opus 9, No. 2), each with their own distinct characters, Robbins gives distinct “characters” to the three relationships portrayed, and the choreography examines and illuminates these three relationships. The first couple is representative of innocent, youthful love – a couple in love with the idea of love as much as in love with each other; the second is a more mature, settled form of love that has challenges that must be overcome, and the third exemplifies a passionate, tempestuous, and somewhat irrational love, a couple that fights and forgives in order to fight and forgive and love each other another day. In the end, the three couples cross paths, exchange pleasantries, and leave, not knowing the “real” nature of the relationships they think they see in the couples beside them, comfortable with the relationships they have, and not in the least tempted to change partners.

I’ve seen In the Night many times, danced by several different companies, and it never fails to take my breath away with its quality, its pitch-perfect focus and tinge of irony, and its … humanity. And although Robbins stuffs the many intricacies of a relationship into his choreography, he does so by using what appears to be a minimum of extraneous movement. Every step is there for a reason; every combination speaks. 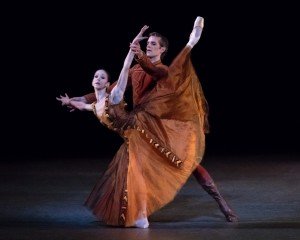 Each of the three couples delivered Robbins’s choreography flawlessly, and consistent with the different characteristics he attributes to the different couples. Youthful lyricism dominates the first couple’s choreography, and Lauren Lovette and Joseph Gordon, each of whom celebrated their New York debuts in the roles earlier this season, danced the first couple with gentle and compelling romantic intensity. Sara Mearns and Jared Angle played the third couple. I would have preferred a bit more internal intensity displayed in Angle’s character, but his execution was appropriate as it was. Mearns, on the other hand, delivered a dynamite performance, filling her portrayal with the explosive character (and accompanying choreography) that the role demands. I suspect that some by now will have commented negatively on what might be considered the “submission” component of the relationship, but although it may strike some as politically incorrect, it’s perfectly appropriate in context. I had more difficulty with the middle, “mature” relationship couple, not because of any deficiency in their execution (on the contrary, the execution by both was exemplary), but because they didn’t fit well together. Russell Janzen seemed a bit too young to be donning a pseudo-military-looking / off to work outfit, apparently intending to leave to focus on other aspects of his life, while Maria Kowroski’s portrayal of his wife / lover  didn’t work well either for me, because she appeared so much more mature-looking than he did. Regardless, the scenes that illustrate the three couples’ relationships are snapshots in time that, because of their emotional components, have universal and timeless relevance. 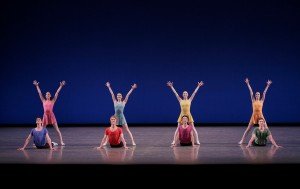 Interplay and NY Export: Opus Jazz, as good as they are (and don’t get my seeming lack of enthusiasm wrong – they’re both wonderful dances), are snapshots in time in a different way. Each is intended to capture the youthful enthusiasm of the period. While youthful enthusiasm may be a common denominator for any period, these dances are relatively period-limited. But also, because of that same display of youthful enthusiasm (think Robbins’s choreography in West Side Story), they’re vehicles for some of the younger members of the company to shine. For that reason alone, besides their undeniable choreographic merits, they’re usually well worth seeing.

However, Interplay, which was the follow-up to Robbins’s initial blockbuster, Fancy Free, here was danced by company members who’ve been with the company for awhile: Sara Adams and Indiana Jones, both soloists; Kristen Segin, Sarah Villwock (her role debut), Devin Alberda, Spartak Hoxha, and Peter Walker, each a member of the corps; and Roman Mejia (who debuted in his role earlier in the season), also a member of the corps, but one who has been given significant opportunities and is not an unknown quantity. They all exhibited the requisite youthful enthusiasm that the piece requires, and displayed the dual-meaning of the dance’s title (interplay of classical and vernacular movement, and interplay among period “teenagers”) very well, but their casting here illustrates the relative stagnation that has taken place since Peter Martins’s departure. [More on that below.] Be that as it may, the execution was super overall, and Hoxha (in his “Horseplay” solo) and Villwock and Walker (in their “Byplay” duet), merit special praise. 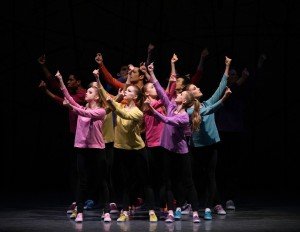 Interplay has the appeal of one of Robbins’s (and, more currently, Justin Peck’s) “sneaker” ballets, but it’s not danced in sneakers – the men wear socks over whatever is worn beneath them, and the women, to my recollection, wear either ballet slippers or toe shoes. NY Export: Opus Jazz, however, is a bona fide sneaker ballet, and a thoroughly delightful and complex piece even though it, too, may be seen as dated to the late 1950s and the style that America then exported to the rest of the world.

The dance’s large (8 / 8) cast was led by Villwock, Walker, Laine Habony, and Jonathan Fahoury (replacing Harrison Coll). All debuted earlier in the season, except for Fahoury, for whom this performance was his role debut. Each did a splendid job – but I must admit that I missed the contributions in “recent past” performances by Georgina Pazcoguin, who so fully captured the jazzy movement quality that makes the piece more than just another sneaker ballet. 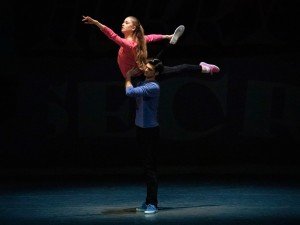 Changes of leadership are often tinged with irony. So it is with the changes in artistic leadership announced by the company on February 28. Former Principal Dancer Jonathan Stafford, who led the four-person team that temporarily replaced Martins (who had retired in the wake of allegations against him as to which he was subsequently exonerated) was formally named as Artistic Director. [I’m aware that there are some who think that Martins’s exoneration should be dismissed as not definitive, as there are some who questioned the allegations from the beginning. So save your emails.]

However, there can be no denying – except by some after the fact and/or with an agenda – that Martins took an impossible situation (succeeding George Balanchine), and after a period of uncertainty, turned NYCB into the most exciting company in New York. He did this by taking risks (many of which were not successful), creating dances (many of which in hindsight are better than their original critical reception would indicate), pointing NYCB in the direction of contemporary choreography as well as preserving its Balanchine / Robbins heritage, and perhaps most of all, casting that capitalized on the company’s embarrassment of riches (the continuing excellence of graduates of the company’s affiliated School of American Ballet who were invited into the company) as opposed to maintaining the status quo. Regardless of whether the earlier criticism was valid, the apparent company turnaround since roughly 2009-2011 was almost universally recognized. While Martins may be, and certainly was by many, criticized for abandoning senior dancers (by longevity, not necessarily by rank) prematurely, his decisions to give opportunities to younger dancers paved the way for the company’s continuing growth. Going to a NYCB performance was never the same old same old, even with the casting of NYCB classics.

Almost immediately after his departure, the scheduling and casting adventurism appeared to come to an abrupt halt. There were exceptions, of course, and injuries to promising dancers certainly played a part, but overall it appeared that the company’s senior dancers were being assigned roles, and given more performances in which to dance them, than had been the case under Martins. While in some ways this may be considered a good thing (e.g., with Kowroski showing that rumors of her imminent retirement were grossly premature), limiting artistic growth and development of younger dancers can have serious negative consequences for NYCB’s (and any company’s) future.

With his appointment as Artistic Director, Stafford may no longer feel constrained not to rock the boat. One hopes that that will be the case, and that promising corps dancers, including those who have been with the company for years, will not stagnate in the equivalent of what I’ve previously described, up until a couple of years ago, as American Ballet Theatre’s “soloist purgatory,” and that programming variety will also increase (currently, too many dances from one season bleed into the next – presumably for financial considerations). But it’s ironic that Stafford, though always a stalwart principal dancer but never a “star,” is taking over from one who, whatever his personal qualities may have been, was a star dancer with the reputational authority and charisma eventually to take NYCB where it needed to go.

Even more ironic was Whelan’s appointment as Associate Artistic Director. Considered by many (including me) to be the soul of NYCB, Martins very obviously limited her exposure in her later years with the company, the consequence of which was to give opportunities to younger dancers. Now, at least potentially, the tables have turned.

At present, the current formal leadership transition is, in the context of NYCB’s history, another brief snapshot in time (as was the interim artistic leadership that preceded it). We’ll know with greater certainty whether, and how, this change of leadership will impact the company’s performing schedule and casting within two or three years – and maybe as soon as next year. Hopefully things will get interesting.