I dreaded it because Hyltin, who is outstanding at what she does and so reliable that I can’t recall seeing anything less than top-flight execution in the scores of performances of hers that I’ve seen, is also one of the most human of ballerinas. She never appears to flaunt her talent, and never gives the impression that she’s somehow better than anyone else or in any way entitled. To the extent audiences attend ballet performances to see particular dancers, which is frequently the case, they don’t attend hers because she’s secured a place in the pantheon of idolized great ballerinas; they come to see her because, notwithstanding her manifest ability, they see a little of themselves and their own challenges and triumphs in her. She’s a ballerina with whom members of the audience can identify; she’s the audience’s friend. [The last time I recall using that phrase was upon the retirement more than fifteen years ago of a ballerina with American Ballet Theatre – Amanda McKerrow.] 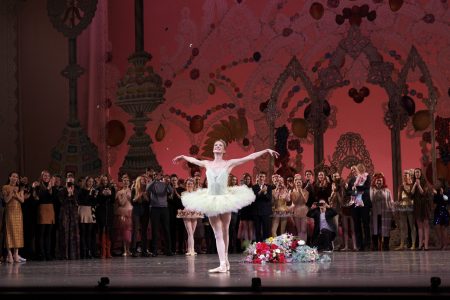 On the other hand, I looked forward to her Farewell because even though none of her abilities have diminished over time, she’s earned it. That she decided after 20+ years with the company that this was the appropriate time to change the focus of her attention to a different, and perhaps more important, priority is her prerogative. And I knew that her Farewell would be a joyous occasion for the audience, for other company members and staff, and for her.  It was. 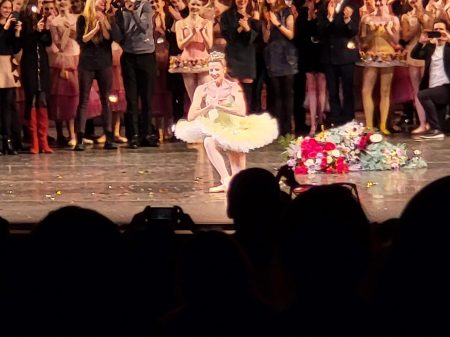 Before going into some detail on Farewell, I’ll first address the context in which it was celebrated – a performance of George Balanchine’s ‘The Nutcracker’ – in part because I’m sure Hyltin would prefer it that way.

The Nutcracker, wherever it may be performed, may be as close as one comes in ballet to the equivalent of a home-cooked meal. It’s comforting, it goes down easily, and in most cases it tastes good – visually. That it also rekindles memories, actual or imagined, is gravy. To the basic story, and the basic sensation it produces, Balanchine adds spectacle – a Christmas fruit cake that’s studded with bits and pieces of exotic-seeming fruits and nuts, with some snow-like squiggles on top and a sugarplum chaser. And it’s that rarity of fruit cakes that tastes – again, visually – as good as it looks. Seeing it at least once – or at least once a year – is a life-affirming experience. And it’s not all spectacle; the more one sees it the more unexpected treats one finds along the way – including nuances that add character depth and hints of an underlying coming-of-age theme.

One of this year’s production highlights was the fact that it included an unusually large number of young dancers (all from the NYCB’s affiliated School of American Ballet) for whom this was their first Nutcracker experience – 108 of the 126 young dancers who comprise the alternating casts. Their relative inexperience compared to the students in previous productions, a consequence of the pandemic, proved to have little consequence in actual performance. And Sunday evening’s lead students – Caroline O’Hagan’s particularly sweet Marie, Titus Landegger, a compelling Drosselmeyer’s Nephew/ The Nutcracker/ Prince, and Ethan Schmidt as Marie’s trouble-making brother Fritz – gave convincing performances. 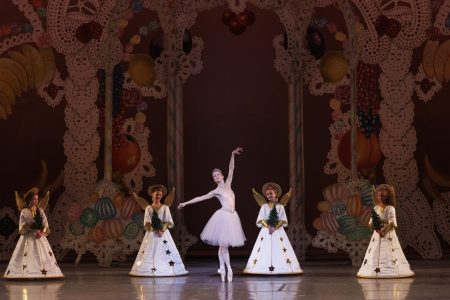 Among the adults, the performance’s highlights included Lauren Collette and Gabriella Domini’s engaging portrayals as Act I’s Columbine and Harlequin, respectively, Canaan Weber’s explosively rigid Soldier, the sixteen-dancer (including apprentices) corp’s Snowflakes, and Guest Artist Sean Suozzi (a former NYCB Soloist) as a mysterious but genial Drosselmeyer. In Act II, Jacqueline Bologna and Victor Abreu were an exceptionally (and appropriately) spicy Hot Chocolate (Spanish Dance), Alexa Maxwell’s Coffee (Arabian) was delivered with intelligent sensuality – though to me the combination blonde headdress/ wig looked artificial, Harrison Coll’s Candy Cane provided a flashy hoop exhibition, and Indiana Woodward delivered a memorable and pitch-perfect Dewdrop. And Andrew Veyette, the Sugarplum Fairy’s Cavalier, proved once again that he’s a superb partner, and, once again, that just when you think he may be running out of gas, he redoubles his efforts and delivers an exceptional solo.

Throughout was the masterful performance of the Tchaikovsky score by the superb New York City Ballet Orchestra, led by Music Director Andrew Litton, which included the singularly moving violin solo in Act I that Balanchine borrowed from the Entr’acte of Tchaikovsky’s The Sleeping Beauty, played with his usual consummate skill by Concertmaster Kurt Nikkanen. 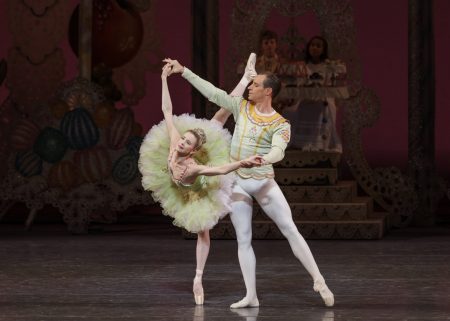 And then there was Hyltin’s Sugarplum Fairy. I’ve seen many ballerinas dance this role, including Hyltin on many occasions, but I’ve never seen her or anyone else push her physical limits as Hyltin did on Sunday evening. This was not a careful or measured performance (which no one who’s seen Hyltin dance prior to this would have expected), but it also far surpassed anything that might be described simply as highly competent or bravura. It was one of exceptional strength and clarity, performed with obvious determination to deliver more of every aspect of the role than she’d ever done before. Every arabesque, every gesture, every visualization of gentle regality, every pirouette, every pique turn, every pose, was what she’s done before, cubed. She was excited to perform above her limits, and the feeling was contagious. At one point toward the end of the Act II pas de deux she pushed herself so hard that she almost lost her footing – but it was the product of understandable exuberance, and Veyette quickly returned her to center. If one has to retire, this was a great way to go out.

Hyltin’s performing career roughly coincided with my decision to immerse myself in ballet more than I had previously. Consequently, over the years I’ve had the privilege of witnessing her artistic growth almost literally from beginning to end. I remember well, soon after her promotion to principal in 2007, that many regular NYCB audience members thought she had been promoted too quickly and lacked the seasoning to handle major principal roles. Indeed, I wrote many years ago that I’d overheard some critics complaining that “she was being given roles for which she was not suited.” But Peter Martins, then NYCB’s Ballet Master in Chief, obviously felt otherwise, and based on what I saw of her, I did too. To me, before and after she became a Principal, she was always the little ballerina that could. [Stage measurements are deceptive; she’s not “little” at all.] 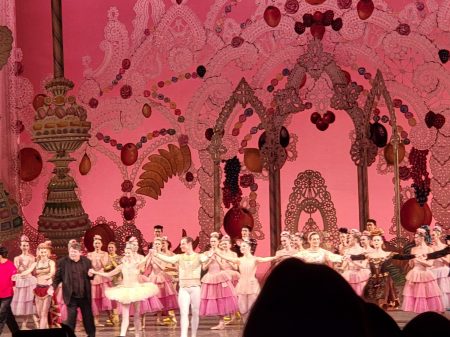 Fairly quickly thereafter, as Hyltin won them over, such comments disappeared.

Those qualities of appearing to push herself and of delivering consistently superior performances have been hallmarks of her performing career. Equally important, however, is the intelligence she brings to her roles and that she radiates from the stage. She’s not hesitant to try different approaches or to add nuances that are entirely her own.

The one time that I briefly spoke with her was a few days after her debut in Balanchine’s Mozartiana. Although I appreciated the ballet, in prior performances I found it too reverential, and too mournful. Despite the presence of children (from the School of American Ballet), I couldn’t get excited about it. Then I saw Hyltin’s debut, and it was a revelation: her different interpretation, almost celebratory, opened my eyes and made me see the piece differently. So at one point when I happened to see her on her way into the theater, I had to ask her whether what I sensed was something she knew was different and a quality she’d intended to weave into her portrayal. She knew exactly what I was referring to, and confirmed that this indeed was a different quality that she’d intended to project – and seemed pleased to know that it registered.

This intelligence is a component of her portrayals in many more roles than just Mozartiana. From Serenade to Rubies to Duo Concertant (I described her portrayal as incandescent), from Jerome Robbins’s The Cage to Justin Peck’s Everywhere We Go, from Aurora to Odette/Odile to the central ballerina in Symphony in Three Movements (if there’s one role that defines her NYCB performing career – although I doubt that there’s only one – it’s that), they and the plethora of her other roles are all intelligently conceived and executed. 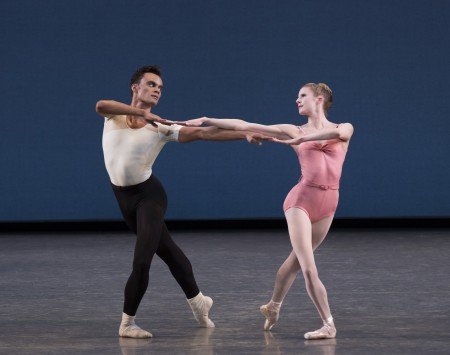 Sterling Hyltin, here with Taylor Stanley,
in a prior performance of George Balanchine’s
“Symphony in Three Movements”
Photo by Paul Kolnik

Another individual and rare quality is the sense of grace, and graciousness, with which she illuminates the stage. There’s a reason why the audience and her colleagues not only respect her ability, but like her a lot as a person.

And there’s one final quality among the many she brings to her roles: a sense of joy to be doing what she’s doing, and always happy doing whatever she’s assigned to do.

This sense of joy permeated her Farewell too. To one extent or another every Farewell is a joyous, happy occasion. The procedure is always essentially the same – the upstage arc is filled left to right with members of the corps and other company employees, and then one by one principals and soloists greet her with a single rose, followed by dancers no longer with the company (including Robbie Fairchild, who partnered her in her first and final performance of Vienna Waltzes last fall), then by company staff carrying larger bouquets (including Artistic Director Jonathan Stafford and Associate Artistic Director Wendy Whelan), followed by her husband and daughter. 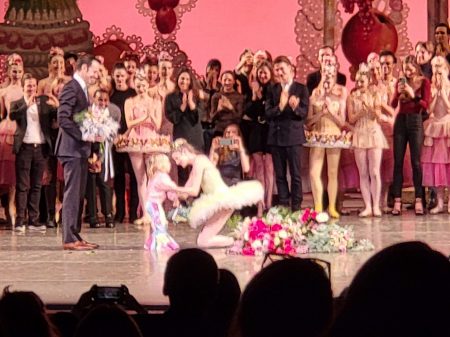 That being said, Hyltin made this Farewell her own. This wasn’t a ritual or an homage, as some turn out to be; it was a full-fledged celebration. First, before any flowers were presented to her (and as Amar Ramaser did at his Farewell), Hyltin left the stage to acknowledge and thank Martins, who was seated at the front of the Orchestra, audience right. This was not perfunctory. Martins nurtured her (and others), pushing them to perform to their limits and perhaps to believe in themselves when others didn’t. If nothing else (and there’s a lot “else”), Martins’s stewardship will be remembered for this nurturing and promotion of talent and for providing young soloists and corps dancers with opportunities to dance featured (including lead) roles that might normally not have been assigned to dancers at that level. In the process, he created what I frequently referred to as NYCB’s embarrassment of riches, and laid the foundation for the company’s future. 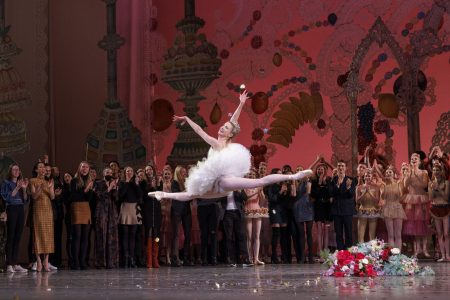 Last, after all the roses had been presented and all the hugs and kisses had been exchanged, Hyltin stood center stage amid the adulation – and then burst into a celebratory circle of piqué turns into a concluding grand jeté – which prompted further smiles and cheers – and which she did, perhaps, because standing in one place may not have been the finest way to conclude her performing career. As ever, the “little” ballerina that could. And did.