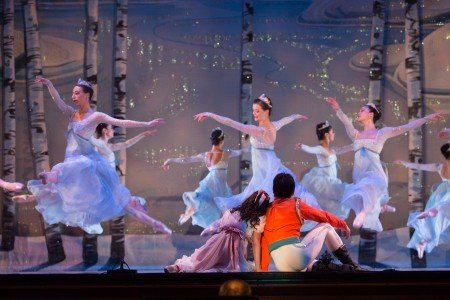 The Paramount Theater’s Art Deco architecture is stunning accentuated by Christmas trees and small children running through the lobby wearing sparkling tiaras – an idyllic setting for the fantasy of The Nutcracker. An annual tradition for so many families, this glittery ballet follows a special girl (Marie in this production, Marichen, Mary, Masha, and Clara in others) and a beautiful prince who is transformed from her precious nutcracker doll. There are magical presents, battles between toy soldiers and mice, a wicked mouse king and a far off dreamland. It is the perfect accompaniment to the holidays: a time of magic and of dreams.

One of the strengths of this ballet is its casting of dancers of all different ages. Though the many junior dancers were not a hit when the ballet first premiered in St. Petersburg in 1892, the enormous cast provides jovial and bustling activity all over the stage in the opening party scene. Order disguised as chaos, there are several stories playing out from one side of the room to the other – a common scenario at any family holiday party. Though the Paramount’s stage is modest, Artistic Director Graham Lustig manages to arrange the scene to hold all the lively drama of larger venues.

Zack Brown’s sets and costumes are a pastel bubble gum disco dreamscape. While some of the scenery is a little cloying and the transforming Christmas tree falls short of impressive, the frozen birch forest with glittering snow covered hills and a frozen river in the distance are an idyllic setting for the snow maidens in their equally dazzling gowns and tiaras.

The Oakland Symphony is a stellar accompaniment and adds a robustness to the production. The Mt. Eden High School Women’s Choir pushes the music over the edge with their heavenly voices.

As for Lustig’s creative direction, each artist must bring his or her own flavor to a production and with a ballet so widely known and oft performed, it is hard not to be compared to everyone who has come before. Audiences have their favorite renditions and moments from other stagings, and Lustig’s cutting of some of the most impressive moments including Drosselmeyer’s magical presents – human-size toys that come to life and perform for the guests, was a bit disappointing.

While the overall tone of the ballet is lifted from slightly dark to something more resembling ‘children’s fairy land’, with candy castles, a cupcake throne, and toy soldiers that resemble clowns more than tiny tin combatants, Lustig’s remixing of Uncle Drosselmeyer was a tad unsettling. Rather than a slightly intimidating figure with white hair and an impressive black magician’s cloak (and sometimes even an eye patch) commanding respect and awe, Lustig’s Drosselmeyer was more youthful and comical. More mime than mentor, at one point he enters the stage on enormous stilts wearing bell-bottoms two men tall. While the stilt work of Scott McMahan is impressive, the re-imagining of this character falls short of its mark. Sometimes a classic is a classic for good reason.

The upside to the whimsicality of Lustig’s interpretation were a few moments of genuine humor – the dancing snow balls with their poof-ball costumes and the mischievous clowns brought giggles from the entire audience. The choreography overall is admittedly a bit flat compared to what we might expect of so many notable ballet companies. However, there were still a number of standout moments throughout including Ava Chatterson, Sam Beard, Jackie McConnell and Evelyn Turner as the Arabian dancers.

Megan Terry and Jesse Campell steal the show as the Sugar Plumb Fairy and her handsome Cavalier. Unfortunately, Lustig has Marie and the Nutcracker prince only sit and observe for most of the ballet, a real lost opportunity especially with a well-seasoned dancer like Seyong Kim cast as the Nutcracker. Terry (in particular) and Campell are the true stars of the show despite their supporting character rolls.

Although Lustig’s interpretation of this classic is unexpected, the reinterpreted classic still renders an enjoyable evening of magic, dreams and holiday cheer.

San Francisco/Bay Area Round Up: May 2014