What on earth would compel someone to travel 350 miles by train, cab, and one street car ride to Portland, Oregon? Certainly, the Rose City itself is more than a motive to enjoy this area’s bounty, but in this case, it was to respond to an invitation to attend an open studio rehearsal of Oregon Ballet Theatre’s Cinderella. I was also curious to see OBT’s new headquarters, since their move a couple of years ago. 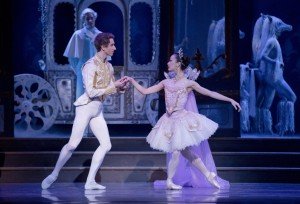 I believe strongly that one of the best ways to support something is to show up, and, as I like to humorously say, “It’s important to be a seat in a seat!” There were more than a dozen of us filling the seats in Studio 1, with its light-filled space and windows opening up to the Willamette River just a stone’s throw away, for the first of two, single hours of rehearsal. The first was with Ballet Master Jeffrey Stanton, and the second with Ballet Mistress Lisa Kipp, each rehearsing, teaching, and coaching segments from the first part of the ballet. Their styles were effective, but they differed in their approach. Stanton is nurturing and quietly authoritative, while Kipp is no-nonsense, quick yet clearly supportive of the dancers. Each was prepared and ready to double-check and research (via an archive video). After observing, I commented that I’d want to work for them! (One of my own well-known dancer stories is of how, over 40 years ago, when I was in a repertory modern dance company, a choreographer — for whom I had and have enormous respect — verbally went on-and-on about her new work, and we dancers had not yet done one step. So, after about 30 minutes of this, I asked, “So, Phyllis, what are the steps!?” As a side lesson-learned, I’ve tried ever since not to waste the time of either my students or dancers.) I was so impressed by how both were kind to the dancers and how that kindness extended to their work and professionalism. 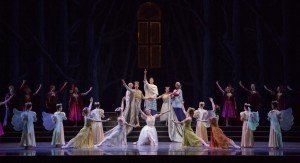 The Ben Stevenson choreography is filled with humor and pathos, and this is on display in these early scenes. Fairy godmother, stepsisters (wonderfully played by men), dad and step-mom, dancing master, wig and dress makers are all trying to outfit and prepare the (impossible) family for the Prince’s upcoming Ball. A shout out to Michael Linsmeier for being so shy (not!) and how funny and effective he makes “his” stepsister role. What I observed and enjoyed during these two all-too-brief hours made me even more anxious to enjoy the complete show when it opens soon. In this run, we saw Xuan Cheng give an amazing and thoughtful portrayal as the lead, Cinderella.

Following the rehearsal, I was given a tour of the building, which includes three studios shared by both the OBT Company and School, changing and lounge areas, and finally the Costume Shop where I got to see the talented and dedicated staff hard at work. One was working on Cinderella’s first ragged costume and another was replicating costumes from an earlier ballet that used an older material that only stretched in two ways and now that four-way stretch materials are available was remaking unitards. 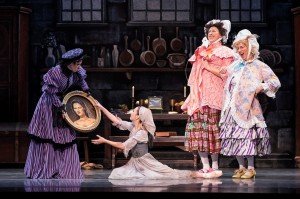 Each staff member welcomed me and all were great hosts. It was neat to have the Artistic Director, Kevin Irving, come out, say hello and sit in on one of the rehearsals. Brook Manning, Lecturer & Historian, talked to us about the production, of its history as a ballet and musical piece, and had culled and pulled out various costumes to share. Totally fun and interesting!

Of course, no trip to Portland would have been complete without a quick stop at Powell’s Books on the way back to the train station and north to Seattle. Did I gravitate to the dance book section? Is Cinderella a rags to riches story?

I loved my time at OBT HQ, seeing friends, and I can hardly wait to return to the Rose City for the show.