Dance that lives on in the memory is always welcome, whether because of distinctive choreography or unusual location. London was lucky to have four such works in October.

New Movement Collective / Jonathan McCree Do Be Do Be Do

New Movement Collection has established a remarkable reputation for collaborative innovation and Do Be Do Be Do is their latest example. Located in the white half-cylinder of Sim-Smith Gallery, under a railway arch in Kennington, artist Jonathan McCree has created a number of free standing wooden structures decorated with baroque motifs and an assortment of marks from tubes, rollers and oil sticks creating a colourful melange. While waiting for the dancers to enter the space, we watch two videos: the first has one of the UK’s finest dancers, Jonathan Goddard back from a serious injury, moving smoothly on the spot and the second shows the artist at work creating the structures. 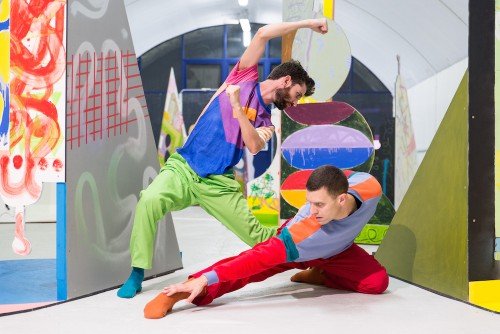 NMC / Jonathan McCree “Do Be Do Be Do”
Photo: Sim Smith

Goddard and Jonathan Wakeling enter the space to baroque music and dressed in the same style. Initially the movement is primarily gestural and then more fluent as Paul Statham’s music moves to modernity and the traditional coats are discarded. Sometimes in unison, sometimes facing in opposite directions, sometimes stretching dynamically, the dancers move around the space and we change position with them, perhaps only a couple of feet away from the action. The audience decides whether to focus on one dancer or find a vantage point to see both. At one point I looked through a hole in one of the structures to gain a new perspective and after the performance I saw the art structures with different eyes. Do Be Do Be Do is a work where the individual elements combine to make a whole significantly greater than its parts. As always, I look forward to New Movement Collective’s next imaginative project.

Rosemary Lee has a deservedly high reputation for community dance work. I remember The Banquet Dances, the first part of a journey from Greenwich down the Thames, Take Me to the River. Lee’s creation, performed by a mixed age cast of 50, made a greater impact than the two professional segments and made me rethink the contribution that community dance can make to performance. Square Dances in 2011 saw Lee making widely different work in four squares in Central London. And with Calling Tree, the choreographer, working with Simon Whitehead, returned to a fifth Bloomsbury space, St. George’s Gardens, with another radically different work.

Over two hours we saw two aerial artists climbing and running up trees, crouching and moving in the branches, while two a cappella singers perform a range of gentle songs with intriguing harmonies. A group of dancers appear from time to time in various parts of the Gardens, weaving along the paths and circling the trees and messages and bird calls emanate from loudspeakers. While the different components of Calling Tree didn’t quite gel for me, I was left with some memorable images and an enigmatic atmosphere, which will return whenever I walk through St. George’s Gardens and look up again at the trees.

Sadler’s Wells plays a vital role in London’s dance scene, commissioning high quality work as well as a receiving house for the best of world dance. This Autumn features Out of Asia 2 covering a myriad of styles from the National Ballet of China to avant garde chamber works. Soft Machine describes itself as “a multimedia project investigating the contemporary status of dance in Asia..through foyer installations of video interviews and dance documentaries…[and] live performances.” The first half of this evening event, featured the Osaka based Yuya Tsukahara / contact Gonzo. Tsukahara founded the group and during the performance told us that he wonders whether it really is dance and that his favourite choreographer is a footballer. 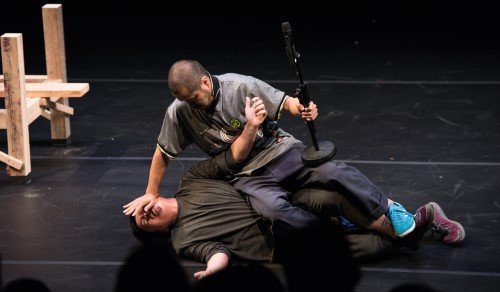 On video we see the evolution of Gonzo – the three performers push and lightly slap each other and then raise the stakes with kicks, punches and heavier slaps, around the stage and on a wooden platform they constructed at the start. To close, the three, joined by an audience member, take it in turns to fire satsumas at each other from a huge elastic band attached to the platform. The photos taken of the impacts are displayed on a screen. We hear about the philosophy of pain and see on video the marks the various impacts make. The London audience laughed nervously at the improvised mayhem and though the final photos of the satsuma attacks raised a smile, overall, this transfer of controlled violence to the stage achieved little and lead nowhere. 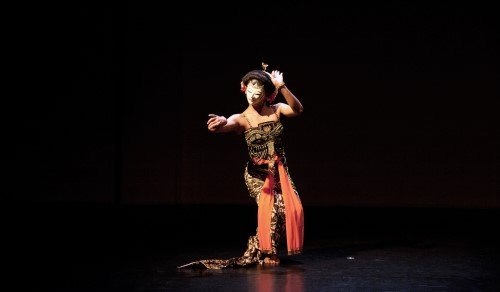 The second half brought Rianto, an Indonesian male dancer living in Tokyo since 2003. At first, we see a masqued figure performing a classical Javanese female dance with the most elaborate gestures and astonishing control in slow, precise movement around the stage. After carefully removing some of the elaborate costume and then the mask, the man is revealed. He describes and demonstrates the first style he learned, Lengger, a traditional erotic dance for women. Later he performs a male, Javanese dance with power and martial intent. Rianto is also in demand by Japanese contemporary groups and we see some of his explorations in this style featuring faster steps. On-stage and on video we hear about his life with his Japanese wife and his visits to gay saunas in Tokyo to relax. Finally the lights dim and as they slowly come up we see his naked back twisting and arching in an exquisite slow dance. The combination of Rianto’s life and his extraordinary dance skills made for a memorable performance.

James Cousins Company: We Are as Gods