February 12, 2022
Debuts Program: She travels softly (through midday light), Borderland, Until the Mermaid Drags You Under

Debuts, a delightful program of Olympic Ballet Theatre, made its way to the stage of the Edmonds Center for the Arts after having been deferred for about two years due to the pandemic.

A bill of three ballets, it opened with Emily Schoen Branch’s She travels softly (through midday light), set to a recording of Portland Cello Project. As the title of her ballet suggests, it was a soft work, with what I call “general movement.” It began with one dancer putting on her white practice sweater and then another dancer entering. Ultimately, it became a large group work and was a good “opener.” 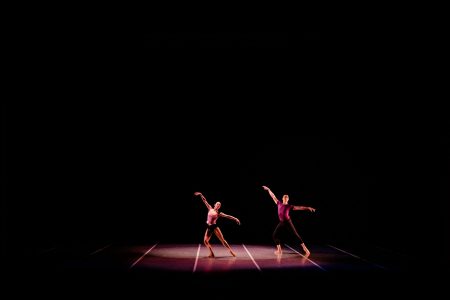 Borderland, choreographed by Price Suddarth, was sharp, sharp, sharp and edgy, quite in contrast to the first ballet. I was thrilled to see Mara Vinson (Olympic Ballet Theatre’s Artistic Director, along with her husband, Oleg Gorboulev) back on stage and really never looking better in a part that required razor-like technique, high control, and speed. Vinson easily deployed each. I’ve missed her from the PNB roster since she left at the end of 2010 and am so happy that she’s continued to dance, as she has so much to give as an artist and many more dancing years left. A former PNB dancer/colleague was also in the cast, whom I nearly didn’t recognize, now shorn of his locks, William Lin-Yee. I didn’t realize he had retired from PNB in 2021 until I consulted the program notes. (Quite a few PNB dancers either retired or left during the past two years, mostly due to the pandemic work shutdown and other adjustments.) Both he and the other male dancer in the piece, Lucian Munteanu, looked quite good, too. The other female cast member was the also super strong, Taylor Lim. Quite the quartet, it’s an excellent ballet, and I enjoyed how it ends with Vinson being spun around in a circle whilst hanging onto the neck of Lin-Yee. 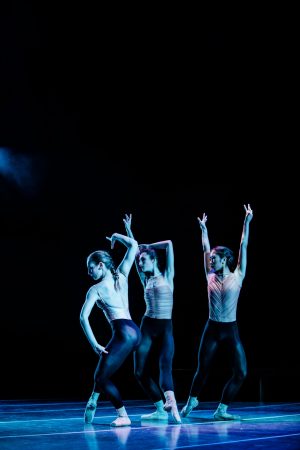 Rowan Catel, Elianna Langley,
and Taylor Lim
in Norbert De La Cruz III’s
“Until the Mermaid Drags You Under”
Photo by Into Dust Photography

Like Branch, Norbert De La Cruz III is a choreographer new to me but not to his craft. His Until the Mermaid Drags You Under is an extended dance statement. I liked this work but have to state my one compositional fuss at the outset — about two-thirds of the way through the dance, he has dancers, as it came across to me, break character and do a wispy “knee dance” (with arm gestures) while seated along two long benches put end-to-end. This, to me, was jarring, and while perhaps intended, I thought not as judicious of a choice as could have been made. When they concluded this bit, they went back to being in previous character mode — that of sea/ocean images, of mermaids, one merman (Thomas Phelan), sea maiden, sailors and the conflict between these — of sirens luring them to their demise and peril. A work of depth, it reminded me of the painting hung in my maternal grandparents’ house for years now hangs in the home of one of my cousins. The painting features women-folk of old standing on an ocean pier, peering out over the waves, waiting and perhaps wondering if and when their men (sailors, fishermen) will return. Sobering, like the tribute at our very own Fishermen’s Terminal to fishermen lost at sea.

Until the Mermaid Drags You Under is an ambitious work and was fully realized by the OBT dancers, which included Vinson, Munteanu, Lin-Yee, Lim, and Phelan, also included Rowan Catel, Alberto Gaspar, Victoria Gutierrez, Elianna Langley, Mario Manansala, and Carlos Narvaez. 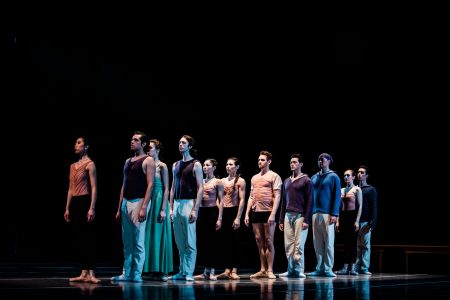 Olympic Ballet Theatre continues the legacy begun by Dorothy Fisher, who sold her studio to John and Helen Wilkins (who smartly relocated the studio to its present location in a former elementary school). Upon Helen’s retirement, new directors Vinson and Gorboulev have not only continued but have built upon this legacy very strongly and beautifully over the past decade. It’s interesting to note, at least to me, that the first time I was in what’s now the Edmonds Center for the Arts Theater (it’s actually the upgraded and remodeled former Edmonds High School auditorium, and super nice) was to see one of Fisher’s ballets. She was a superb choreographer and her work to Poulenc was choreographic perfection. It’s also interesting to note that the stage itself is named in memory of and in honor of John Wilkins, who had the idea that sparked the saving of the auditorium and its reincarnation.

Next up for Olympic Ballet Theatre — Don Quixote May 14 and 15. Be sure to check it out!

Petipa’s ‘Paquita’ and others