The John F. Kennedy Center for the Performing Arts
The REACH
Washington, DC

The Kennedy Center could not have ordered better weather to celebrate the opening of its physical expansion, the REACH. The general public had been eagerly awaiting access to the REACH, the Kennedy Center’s striking new facilities, and on September 7, 2019, that day finally arrived. The gorgeous sunny opening day kicked off with a lively and unique parade, inspiring speeches, and tons of artistic events of all kinds. The dramatically curving architecture by Steven Holl invites movement and welcomes the community through light-filled spaces that encourage exploration and intimacy. The buildings incorporate etched quotes from John F. Kennedy that serve as a lovely lasting tribute to him. 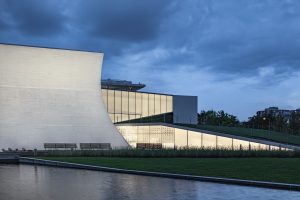 Skylight and Welcome Pavilions from South at Dusk, photo by Richard Barnes

MacArthur Award-winning visual and performance artist Carrie Mae Weems and local nonprofit The MusicianShip created an uplifting parade entitled “The Future Is Now and I am It: A Parade to Mark the Moment,” which included more than 200 artists who call the nation’s capital home. Then came the opening ceremony, at which the Kennedy Center’s President, Deborah F. Rutter, its Chairman David M. Rubenstein, opera star Renée Fleming, and DC’s Mayor Muriel Bowser spoke rousingly about the excitement of having new space in which to connect with the arts and individual artists. The Kennedy Center’s Vice President and Artistic Director of Social Impact, Marc Bamuthi Joseph, composed a choral poem for the occasion, a “Re-Declaration of Creative Independence,” which was performed by Joseph, National Public Radio’s Rachel Martin, actors Tatiana Chavez and Alfre Woodard, and political commentator David Brooks, accompanied by violinist Daniel Bernard Roumain. The poem emphasized the inherent activity in the word “REACH.”

I later enjoyed a documentary film “Me and the Light” in the 144-seat Justice Forum lecture hall, followed by a live performance by a charming pair of Kennedy Center Turnaround Artists Valerie June and Lil Buck, both from Memphis, Tennessee (the film focused on the life and dancing of the supremely talented and big-hearted Lil Buck and featured the music of singer-songwriter Valerie June). In addition, I enjoyed wandering the wonderfully landscaped outdoor areas (130,000 square feet of greenspace and public gardens) and peeking into indoor studios to watch some dance classes (the dance studios have sprung floors, fixed mirrors, and barres, of course, plus viewing windows for visitors). 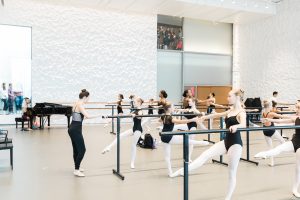 After a great opening day, the 16-day long opening festival continued, culminating in nearly 500 free events across the REACH. I rejoined the festival on September 21, toward its closing, for National Dance Day. In between there were dedicated days spotlighting various themes — from Hip Hop, to Broadway, to Jazz, and from indigenous cultures to local youth and families.

National Dance Day occurred on another lovely day full of sunshine (this year National Dance Day moved from July to September). As with the opening day, there was a lot to take in. Emmy winner Debbie Allen emceed an event on the main stage that included performances by New York City principal dancer Tiler Peck (teaching Christopher Wheeldon’s choreography from Charlotte OC’s “Medicine Man” music video); Jerron Herman, a principal dancer at Heidi Latsky Dance who has cerebral palsy (who also invited the audience to try his unique moves); and So Think You Can Dance all-star Dominic “D-trix” Sandoval (teaching the Official National Dance Day routine). Taking a break from the heat, I went indoors to watch the documentary film Ballet NOW, a behind the scenes look at Tiler Peck — the first woman to curate The Music Center’s famed Ballet NOW program in Los Angeles. Afterward, I listened to Peck discuss her experiences and even spied her mother and her dog (who also appeared in the film) in the audience. Throughout the film, I felt anxiety-ridden as Peck worked hard to prepare for the performances. Definitely look for her in more leadership roles in the future! 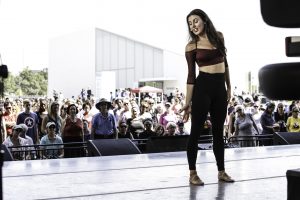 Next, I learned about DC dance history through an informative and interactive program curated by DC-based dance critic/scholar Lisa Traiger. Dancers from local dance schools and dance companies performed outdoors and took the audience on a journey introducing some of DC’s legendary dance educators and choreographers, including, among others, the influential Jones-Haywood School of Ballet, founded in 1941 by African-Americans Doris W. Jones and Claire H. Haywood, and Polish-born Jewish modern dancer Pola Nirenska, for whom DC’s annual awards for outstanding contribution to dance and also lifetime achievement are named. What a beautiful thing to see how these local dance legends live on through others. Finally, I caught part of Fela! The Concert, a colorful and energetic version of the Tony-winning Broadway play about the Nigerian Afrobeat musician and activist Fela Kuti.

In addition to the good weather and abundance of arts, visitors made the opening festival successful by coming out and participating in all that the REACH  offers. Throughout my time at the REACH I observed children turning cartwheels and rolling down a sloped green lawn, couples holding hands strolling looking at sculptures, families picnicking, etc. The good news is that the REACH will continue to offer opportunities for audiences and artists to interact. It’s here to stay!