It’s an anomaly that the fluffiest of ballets in the classical repertoire, Coppélia, is derived from one of E.T.A. Hoffmann’s darkest tales. His original story of eyes pulled from the sockets of disobedient children and fed to the birds will make your blood run cold. 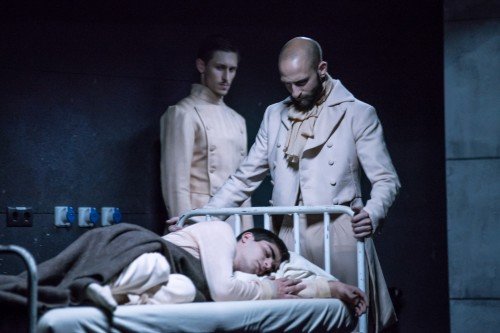 Andreas Heise had adapted this story for Ballett der Oper Graz and it makes one of the most compelling evenings you are ever likely to spend in a theatre. Heise wisely avoids the blood and gore but finds equally dark material in the nightmarish twists of a disturbed mind.

Dispensing with fairy-tales and magic, this production focuses on the human aspects: how men view women, the deceptions of beauty, what we look at and how we shape our vision to suit our personal fantasies. It is also one of the saddest tales, of youthful promise denied. 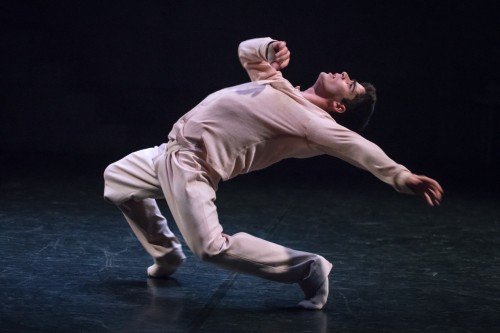 Played out in a small studio theatre, the impact is extreme and unremitting. The stage is bare except for a few domestic accoutrements: a table and chair, washstand and basin and a bed. The light comes up on the sleeping figure of Nathanael, curled in a foetal ball. After a short blackout, the light comes up to reveal the sinister figure of the Sandmann, (Paulio Sovari) and in the next lighting state he is joined by the Father (Arthur Haas). This is the stuff of nightmares as these adults, gazing intently at the boy, will manipulate his mind and destroy his life.

Oper Graz is a small company of around 16 dancers but fielded an exceptional cast. Heise has developed the character of Clara, played by Lucie Horná, the anchor of reality in a shifting world, and she and Enrique Sáez Martínez as Nathanael are on stage for most of the 70 minutes duration. These are challenging roles for such young dancers and their talent and commitment was hugely impressive. They have a number of demanding duets where the complexity of the choreography is matched by the complexity of the emotions as Nathanael drifts into his dream state and Clara tries to win him back. They inhabit their characters completely, giving meaning to every glance and touch. The complex play of emotions is extended in the trios: when Clara’s brother, Lothar, (Frederico Alves de Oliveira) joins in the fray or as Clara is brutally manhandled by the Father and Sandmann. And each time Heise finds the choreographic idiom to express the moment. 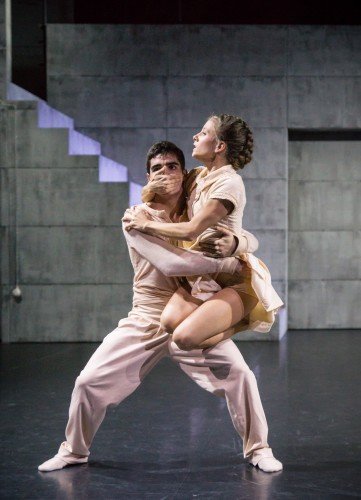 Clara ultimately loses her desperate and unequal battle against the darkness and Nathanael returns to the Father and Sandmann. The sliding door in the back wall enables a quick reveal and we witness the Sandmann inviting Nathanael to put his head in the noose. Horná has the final minutes alone on stage coming to terms with his death. In a space beyond reason, she tears herself apart, frantically washing at the basin where she first wet the towel to soothe Nathanael’s brow. Coming to her senses, she carefully straightens the bed clothes and numbly climbs the stairs to exit.

Heise’s direction is simple and effective, and his choreography, rich and varied, expressing in movement the emotions that are beyond words. A twisted foot will touch your heart with its vulnerability and the close contact in partner work expresses the many shades of feelings between love and manipulation. The splayed hands of the Sandmann had particularly sinister connotations together with the Father, their four hands weave spells, fingers fluttering like the tentacles of sea anemones, drawing laughter from the audience in a rare moment of relief from the tension. 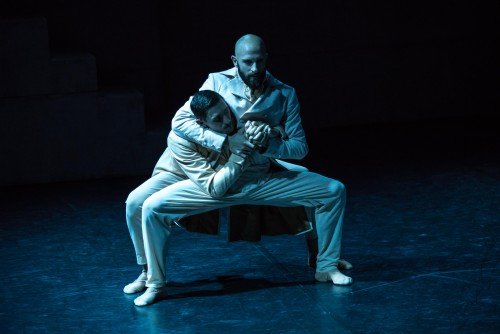 The ensemble fill Nathanael’s dreams, duplicating the characters or becoming a ballet corps when, given the devilish spyglass, he thinks he sees his divine Olympia come to life. But these women are no more than a ballet pastiche. Fluttering their false eyelashes and wearing pink tulle and pointes, they mock his innocence. Martínez is blind to the deception and the radiance in his face as he gazes on these harpies, is heart-rending. Clara, too, dons a pretty skirt and pointe shoes and tries to become his Olympia but without the spy glass, she is just ordinary imperfect Clara and he rejects her and her loving heart.

No aspect of the performance has been overlooked. Each character was well cast: Sovari and Haas, as Sandmann and Father outwardly quite respectable, their well-dressed exterior disguising their moral corruption were an ever present evil, while De Oliveira, as the hapless Lothar was never in control in this maelstrom of deceit. The economical set and costumes, by Sascha Thomsen, suggest period and place but never overwhelm. Johannes Schadl’s lighting is mostly unobtrusive but fierce in the nightmare scenes. The commissioned music by Benjamin Rimmer, like a great film score, supports the action in sounds and musical phrases that are disquieting, unnerving and relentless.

This is a tremendously impressive production for a small company and has been playing to sold out houses with extra evenings added to cope with the demand. Don’t expect to sleep easy afterwards but kill for a ticket when Sandmann returns.