Wow, what at great week for ballet and dance — I was fortunate to have seen some really good (and great) dancing and dances over the past week and Oregon Ballet Theatre’s bill entitled The Americans was a surprising and uplifting delight. 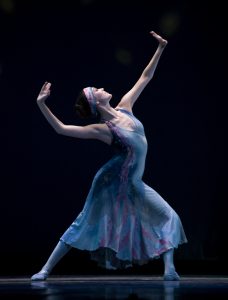 The first ballet on the program was Alvin Ailey’s wonderfully sassy (and very dancy/technical) Night Creature, originally made for TV in 1974 — and narrated by Diana Ross with an intro by Ailey himself, a clip of which was shown during the pre-performance talk by Linda Besant. By a happy coincidence, the very very first ballet I ever saw was Ailey’s Feast of Ashes made for the Joffrey Ballet in 1962. Loved it — so dramatic and well done, and thus I more than loved this new-to-me work which is at the opposite end of the emotional spectrum. I have to say right off the bat, that the OBT dancers got it right. Lots of ease with the hip action (my group in the foyer during intermission was joking around and moving and swinging our hips about with the chant, “Hip Replacement, Hip Replacement, cha-chaah-cha,, BOOM!” — repeat). This work not only has as its base Lester Horton style jazz but allegro ballet steps (beating quick jumps), long-held arabesques, and a fun short parody of Martha Graham’s technique (a woman in perpetual contraction and whose arms were in what’s poetically known as “the vomit position” — hand cupped and over mouth, the other cupped on hip), and chasing a man) which I found a riot, being a “Graham Cracker” myself as the saying goes.

Special shout-outs to Theodore Watler in the part originated by Mr. Ailey — Watler’s technique and charming smile were winning. He got the sass right for sure. – -and the goatee.  Also amazing was new-to-OBT apprentice Brian Bennett. 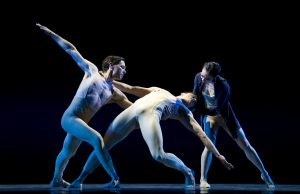 It’s been several years since I’ve enjoyed the choreographic talents of Trey McIntyre and his Robust American Love set to music of a Seattle folk band is a solid work that has a hint of a pre-Civil War family migrating to the American West story. McIntyre is inventive and never dull. Kudos especially to Katherine Monogue (who made the pre-show donation pitch to benefit the dancers’ Career Transition Fund — she herself is leaving the company to pursue a long-held dream of trading pointe shoes for white shoes as a nurse) whose amplitude as a dancer has only gotten better and better and who will be missed. Perhaps she will find some way to continue moving as she pursues her new life and career. 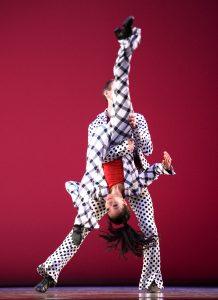 Well, the big NEW hit of the evening was co-choreographed by BodyVox founders, Jamey Hampton and Ashley Roland — their Big Shoes ballet. Starting out with four adorable OBT School children dressed up in shoes and clothes WAY too big for them, and then getting chased off of the stage as the grownups assume wearing these outrageously colorful outfits and having some of the best dancing fun of their careers. A ramp becomes a slide, then the ramp is used as a visual non sequitur whereby the dancers appear to be either way off kilter or upright when they’re actually not. The choreographers really know how to put on a dance show and the Samba for the group cast at the end was a really great closer. For the bows, the cast got into the Samba again, as did Hampton and Roland — and the audience.

What a great and fun program. All too soon OBT’s 2018-19 season was over and I longed to go right back and see this program again and again!