It’s very tempting to launch into a bunch of Dracula/Vampire jokes, but those aside, Oregon Ballet Theatre’s premiere (new to OBT) of Ben Stevenson’s Dracula is definitely a big hit. Ballet marketing departments are on record of having said that all ballets should be titled Swan Lake and I think we can safely add to that “and Dracula,” as the house at the show we attended was virtually packed with enthusiastic goers.

The company, augmented with OBT II and OBT School students and the Ballet Master (Jeffrey Stanton}, and the Rehearsal Director (Lisa Kipp) as the Innkeeper and his wife — (brilliant, by the way) gave a sterling performance. Everything was “on” from beginning to end, as was the OBT Orchestra, led by maestro Niel DePonte. 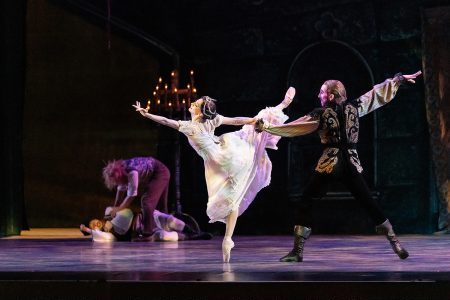 Choreographer Stevenson made use of various Liszt music works, arranged by the late John Lanchbery (former Principal Conductor with the Royal Ballet and the Australian Ballet, and American Ballet Theatre Music Director). With “Flying by Foy” (the company that historically has provided the tech support for stage flying, famously for Peter Pan), what could be better? Dracula had its World Premiere by Houston Ballet in 1997, and it’s taken 25 years to bring it to NW audiences…and we were ready. 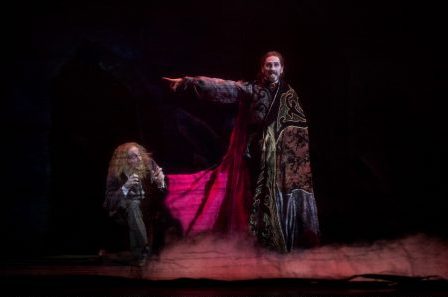 Christopher Kaiser was appropriately menacing as the title character, and I am glad that Stevenson gave him some actual dancing to do, in addition to being able to flex his acting chops. I know first-hand that these kinds of parts (Von Rothbart in my case) were sometimes only a little more than flapping and running around. 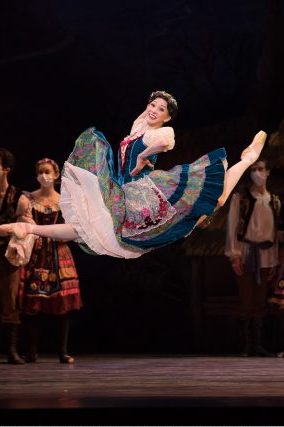 In the part of a village girl who gets kidnapped and then recruited to be one of Dracula’s many brides, Eva Burton got to show the evolution and degradation of this character.  Then after she is fixed as a vampire herself, her return to the village in Act II to taunt them is truly horrific (and entertaining).

Michael Linsmeier was absolutely wonderfully WILD as the crazy servant (and driver of Dracula’s creepy carriage) Renfield — bug eating and all. A great part and what fun!

I particularly enjoyed the fine character dancing and choreography of Act II — Peasant Girls and Boys, with the Boys using shepherd’s crooks as a dancing prop. Very strong. Both Stanton and Kipp got to lead off and participate in the group character dance. Very welcome and excellently done. Too often character dance training is given short shrift and it was rewarding to see the OBT dancers do it so well — with great authority, verve and looking naturally at ease, as must be the case. 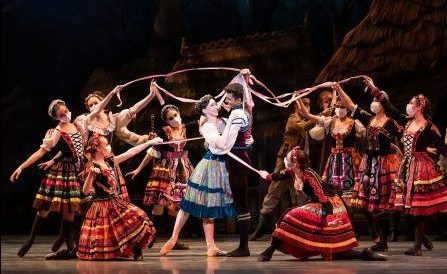 As a part of the communal village, the central pas de deux was given over to Svetlana (Jessica Lind) and Frederick (Gustavo Ribeiro). I found Stevenson’s choreographic rendering of this quite nice, lovely and along the palette lines of Ashton — very mindful of use of complex foot and leg work, incorporating some elements of character dancing, such as flexed feet (particularly in Svetlana’s zippy work). Ribeiro is a real find and asset to the company and he made the most of the opportunity to shine in this important role. He is a good partner and is equipped with very strong, clean technique and clear trajectory of characterization.

As the Old Woman, principal dancer Xuan Cheng was superb with her pantomime and characterization.

Act III ends with the rescue of kidnapped Svetlana (who was carted away at the conclusion of Act II) by the Priest (Bailey Shaw), Frederick and daylight when Dracula and his hold are destroyed. A happy ending for all — except for poor, crazy Renfield, who is left holding the bag/bugs, so to speak. 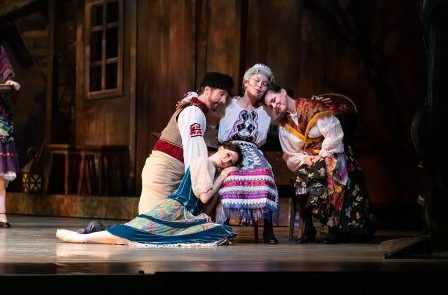 I would be remiss not to mention the fabulous sets (Thomas Boyd) and costumes (Judanna Lynn) that add so many layers that enrich and make this a brilliant production.

Dracula is a major full-length addition to the OBT repertoire that is brilliant in so many ways. This series of performances signals what I hope is a move forward in 2022 to a return to in-person shows after the terrible pandemic of the past couple of years. We all need rescuing and the arts often show us the way.