The novelty and freshness of Nicolo Fonte’s Beautiful Decay never wore off. From start to finish, I thoroughly enjoyed how he took a serious subject (the cycle of life) and turned it into an interesting and exciting full-length dance work in two parts. 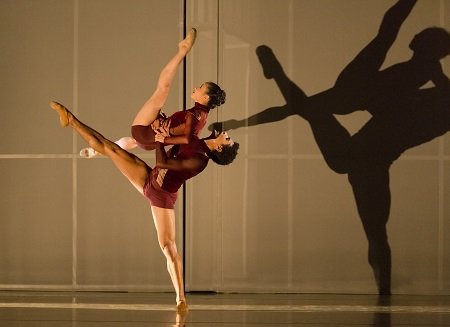 Inspired by a photographic display he saw a few years ago at the Oregon Historical Society’s Museum, just literally around the corner, Fonte designed a dance that uses Baroque and contemporary music — Vivaldi, principally his Four Seasons, Max Richter’s “The Four Seasons Recomposed,” and songs by Olafur Arnalds. As time is linear, Fonte has the dancers moving in only one direction, from stage left to stage right, which makes for some neat mixes of numbers of dancers and pairings. The stage set was divided into sections by panels, two of which were pulled back partway through the performance. For Act II, the set was re-configured with a piece of this set on stage left and an open stage on the right.

While telling the outline of a story – the story of human life, it was never maudlin nor sad, but upbeat, very energetic, and interspersed with moments of poetic poignancy. The dancers were given very athletic and technical work to do, which they did with great clarity and elan. There was also quite a bit of partnering – groups of duos, an occasional trio, but no one person being shown off; a group/team work.

I was particularly smitten with the artistic work of Sarah Griffin, who we learned, sadly, is leaving the company and dance for other career opportunities. Her wonderfully open face and performance style made me really sit up and ask, “Who is that!?” Too bad for us, but her outstanding work in this piece will remain etched in memory.

Beautiful Decay is a another strong repertory choice by Artistic Director Kevin Irving. I’ve been impressed with his choices so far – choices that have shown wisdom, street smarts, and maturity of thought and experience. He is not a rookie. I was pleased to see a full house at the performance we attended and how much the audience cheered and stood for the cast at its conclusion. OBT is an important Northwest arts institution and, given its artistic growth of the past dozen years, is well on its way to being noticed beyond geographic boundaries.