I have been on the prowl for great art for a long time and when I find it, it’s certainly something to be celebrated and cherished. What do I mean by great art? While it can be large or small, on the global stage or in our own backyard, it nevertheless has to be notable and of a nature that has the potential to move us profoundly and to really make a difference. 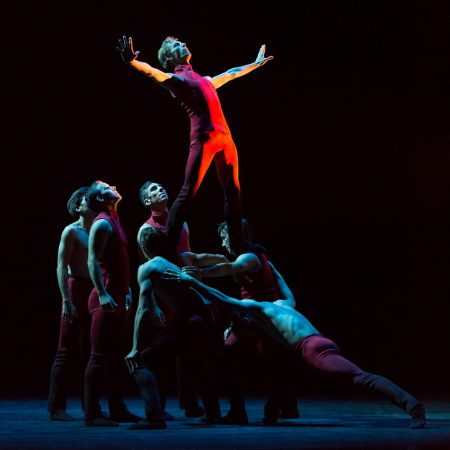 Dance-wise, it helps to begin with great music, and Nicolo Fonte has done just that with his work, Giants Before Us, set to piano music of Liszt and Schubert — and how nice that the audience was treated to live piano accompaniment by an equally superb pianist, Portlander Hunter Noack. Noack (and piano) appeared on the top of an 8-foot platform, theatre magic courtesy of a hydraulic lift. It’s a great visual, but I think it’s also a nod to Noack’s pioneering efforts hauling his own Steinway around on a flatbed truck and playing it in unexpected places such as on a plateau above the Columbia River. 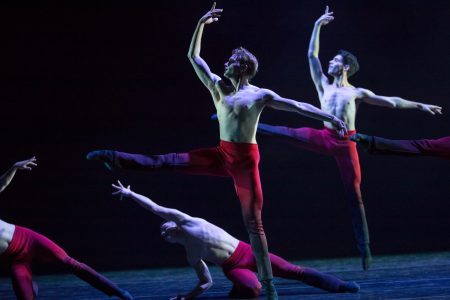 Fonte book-ended the bill and his Presto was a lively and vivacious opener — it said what it had to say, was about the right length, and the temperament was light and fun. Zipping onto stage were Kelsie Nobriga; Brian Simcoe; Eva Burton, and Matthew Pawlicki-Sinclair. 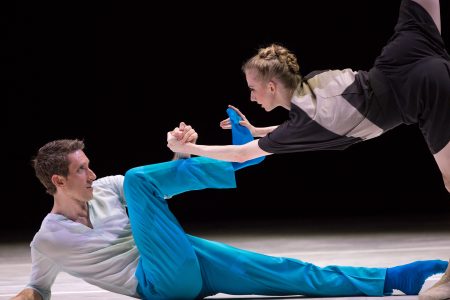 BringingOutsideIn is an experimental piece, first created by Gioconda Barbuto (“in collaboration with the dancers”) in the Summer of 2017 for Choreography XX — a celebration of dance created by women and held in Portland’s Washington Park Rose Garden Amphitheater. It begins with walking patterns that morph into small, mostly individual movement motifs but includes moments for the large group cast that infuses this dance with their 100 percent commitment. My only fuss would be a choreographic one, as I found the work a bit too diffuse and to have needed a stronger and more memorable concluding section/ending.

Nacho Duato hit both choreographic and career pay dirt with his 1983 first work, Jardi Tancat, set to a recording of Catalan songs sung by the amazingly expressive Maria del Mar Bonet. It’s a work that I first saw at Pacific Northwest Ballet many years ago and have enjoyed it multiple times since. Duato allows the piece to be just the right length, using and developing motifs (such as an upturned palm to catch rain or digging, sowing, and reaping) in six short sections. Staged by OBT’s Artistic Director Kevin Irving, it was strongly danced by Katherine Monogue and Colby Parsons; Emily Parker and Michael Linsmeier; and Kelsie Nobriga and Brian Simcoe. You felt the hot Spanish sun right there on stage. 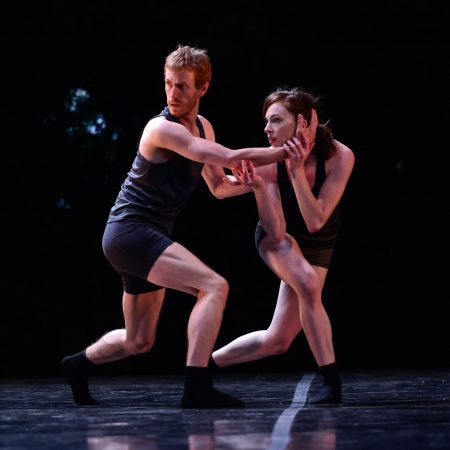 Next was a video interview with retiring principal dancer Chauncey Parsons (HERE), followed by his exquisite rendition of what’s essentially an extended solo, with an all-too-brief appearance by Makino Hayashi about two-thirds of the way through. With choreography by Darrell Grand Moultrie, the solo (Love from Vital Sensations) moves from one heartfelt shape to another, concluding with a strong reaching to the audience with Parsons on his right side, legs bent back. The audience gave Parsons a very well-deserved ovation and he was roundly applauded too by his supportive colleagues (following the last work; see below). 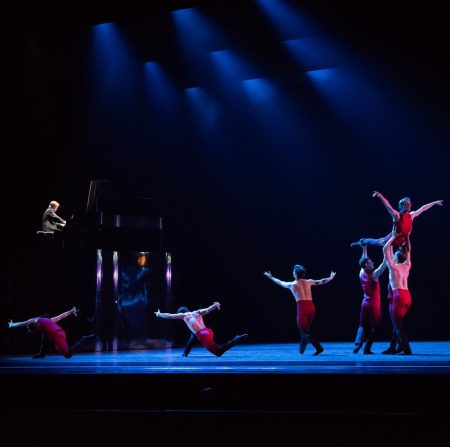 Finally, we’re at Giants Before Us and some of the best, most expressive and greatest keyboard works of Liszt and Schubert. 10 men and one woman — what a combo! While mostly a work for the 10 men, once the woman enters (the wonderful Xuan Cheng) and she “chooses” Peter Franc, theirs is a pas de deux central to the dance. I enjoyed how playful the interactions between the men were and the times when one or the other were lifted and carried about. Kudos to Franc and Cheng, Michael Linsmeier, Chauncey Parsons, Matthew Pawlicki-Sinclair, Thomas Baker, Adam Hartley, Christopher Kaiser, Marc LaPierre, Colby Parsons, and Theodore Watler. 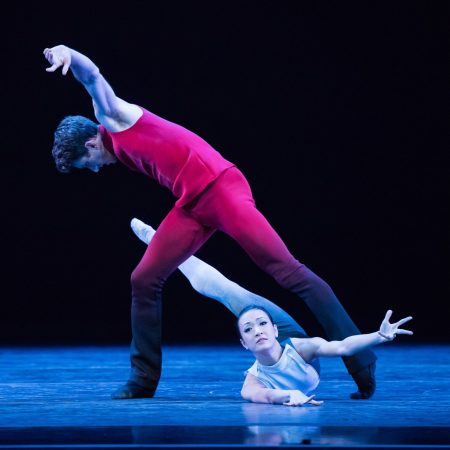 Overall, this was a very good program of shorter works, finishing with one that could and should be seen and experienced again and again.