“Face to Face” is a moniker for Oregon Ballet Theatre’s return to in-person performing, meaning in a theatre and not outdoors or via a streaming platform. The audience was welcomed and the program introduced by Interim Artistic Director Peter Franc and Executive Director Thomas Bruner. (Former AD, Kevin Irving left OBT earlier in the summer.) Not-to-be-missed was OBT Archivist & Ballet Historian Linda Besant’s superb pre-show talk. Hers is always full of great content, very well told and accompanied by interesting slides. I’ve been in this business a very long time and find that I always learn something and enjoy them.

I was thrilled to be able to join in the festivities for their last show of a very strong program — Balanchine’s masterful The Four Temperaments, an extended duet by Ben Stevenson, his Three Preludes, and concluding with Sculpted Clouds by a choreographer new to my viewing, Jennifer Archibald. 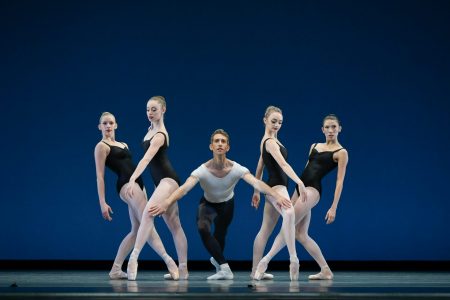 Reconstructed by OBT Ballet Master Lisa Kipp and staged by Francia Russell, who put on the finishing touches and polish, The Four Temperaments, which premiered in 1946, is still modern and contemporarily relevant today. With its sharp and inverted parallel motifs (for example, the left and right arms alternate up/down with the elbows at 90 degrees – think two-dimensional Egypt-style bas –  and these alternate in contrast to what the female dancer is doing; she does the same, but the two are in direct opposition to each other) and use of canon and extraordinarily development of these themes, it remains an exciting and rich visual and visceral experience.

I cannot help but think that Balanchine was influenced by Martha Graham, as his work here uses many of her ideas and motifs, particularly “contraction and release” as seen in the superb male solo that has him fall to the floor, reach his arms forward and contract, and his going off in a deep, deep backbend, which is so deliciously wonderful, excellently performed by Brian Shaw. This should be a segment that all male ballet students study in variations class. This is a ballet to enjoy and love again and again. The Company looked first-rate. Kudos to Shaw, Jessica Lind, Gustavo Ribeiro, Brian Simcoe, and Eva Burton, who each headed up the four variations, following the presentation of the themes. 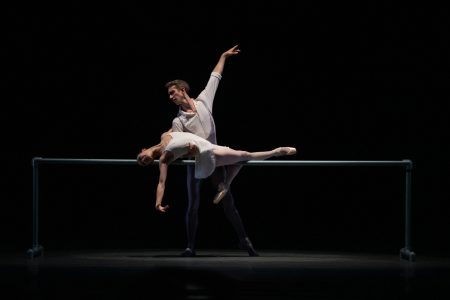 I also enjoyed Three Preludes. I liked how it opened with the two dancers at a center-of-the-stage portable ballet barre and how this was used as both a prop and a tool to extend the story of these two noticing each other and creating the duet. The program notes describe it rather really as a pas de trois, including the on-stage pianist, who performs the Rachmaninoff, and that it’s won choreographic awards and how it’s been performed many times around the world. Our performance time was treated to Burton and Christopher Kaiser, accompanied by Monica Chuchi at the on-stage piano. It was a very pleasant and tidy work, like a heavenly sigh. 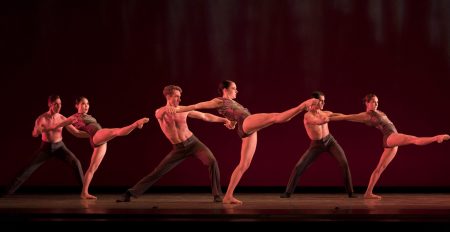 Sometimes I fear new works (though I love and support the contemporary), as sometimes “new” choreographers make works that are, frankly, dreadful. But this was not at all the case with Jennifer Archibald’s work, Sculpted Clouds. It debuted outdoors at the Jordan Schnitzer Summerstage, but I was viewing it for the first time, and really enjoyed it, finding it to be a strong, relatable, and refreshing work. This work is a “keeper” and is ideal for a mid-sized cast.

Next up, George Balanchine’s “The Nutcracker”!