Martha Graham used to like to say that the theatre is a magical place – part of her “theatre was a verb before it was a noun” speech. I agree and find that the most magical moment that I cherish and look forward to greatly is the too-short time span between when the house lights dim and the curtain rises. This is the moment of transport and transformation.

Nicolo Fonte was inspired by the French phrase “L’heure bleue” which is that twilight hour in between worlds when magic – or romance – happens.

Titled Rhapsody in Blue, Fonte created a new ballet for OBT to an augmented edition of the now-iconic Gershwin music. Scored for two pianos and arranged by Thomas Lauderdale and performed by Lauderdale and Hunter Noack, this blue ballet was at once romantic and heartfelt. Xuan Cheng appears in the back-of-the-stage window, seeming sometimes to be observing the action on the stage and sometimes seeming to reflect – perhaps seeing the past before her. The suggestion of a story was told through shifting romantic pairings, sometimes male/female, sometimes male/male, and the aftermath of changing alliances. 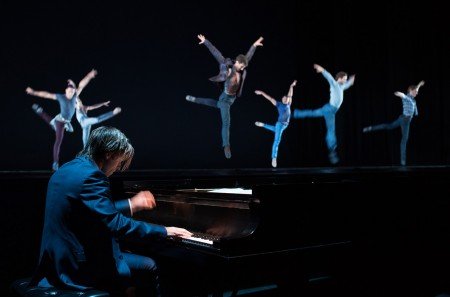 Zestful and zesty is how I might describe what the now internationally-famous band Pink Martini brings to its community collaborations. Never Stop Falling (In Love) was immediately a hit and popular with the audience when it first premiered three years ago in October, 2014; I found it to be equally fun and enjoyable in 2017, strengthened by a final movement that built to a rousing and truly satisfying close. 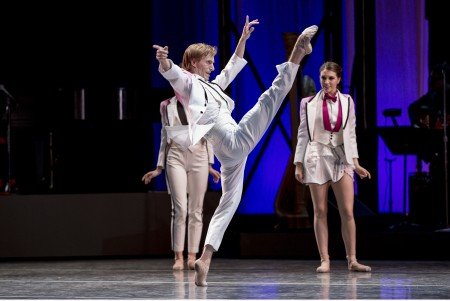 Starring Parsons, and also featuring his brother Colby, its penultimate movement to a Chopin berceuse is a great male duet and should, in itself, win some award. Lovely.

The facile Pink Martini vocalist China Forbes is continually a wonder and provides the musical “glue” that ties the work together. This is a great Fall piece and one that is so needed in our world’s trying times. 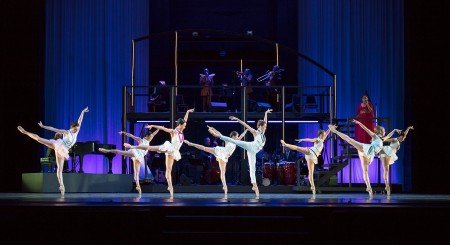 Bravo to OBT and its dedicated artistic and crew teams. This creative effort drew a large crowd, nearly selling out on opening night.

I look forward to seeing not only this work again but future dances with Portland’s balletic treasure, Oregon Ballet Theatre. Early alert – be sure to pair your April viewing with the annual school performance. That is another show not to be missed!