Focusing on gender in ballet and dance, Oregon Ballet Theatre’s Spring program had two pieces with men only, one with women only, one female solo, and one with men and women together. 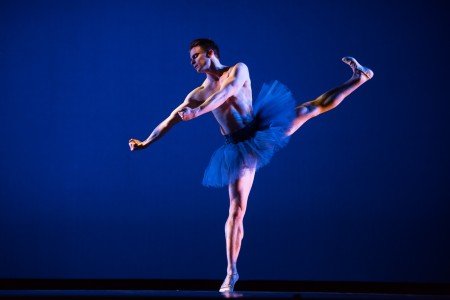 It was an interesting and unusual program that began with Fluidity of Steel by Darrell Grand Moultrie with the OBT men and one OBT School student, Troy Hartwig. It is a powerful piece, a great “opener” and one that should be brought back again and again.

Weirdly and unexpectedly, I found Michel Fokine’s iconic solo, made first and famously for and by Anna Pavlova in 1905 — The Dying Swan — unmoving and not particularly musical. I don’t know if this was me, the staging, the recorded music, or the pull of the moon. Dancer Eva Burton nevertheless gave it her best. 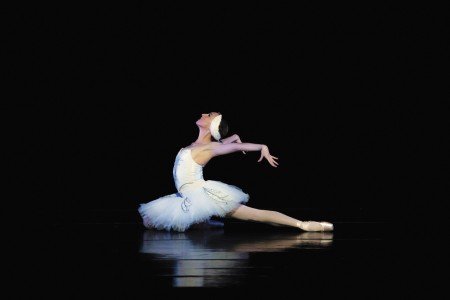 Nicolo Fonte’s Left Unsaid for three couples premiered first for Aspen Santa Fe Ballet at one of my favorite historic theatres, The Lensic (Performing Arts Center) in New Mexico. (As a trivia side note, its name comes from the original owner/builder using the names of his children, as a sly tribute to them.) The Lensic, while beautiful and historic, is an intimate venue for dance, with a stage that is deeper than it is wide. Fonte’s piece worked quite well in the equally intimate setting of the Newmark. A ballet to Bach, it has great wit and invention. 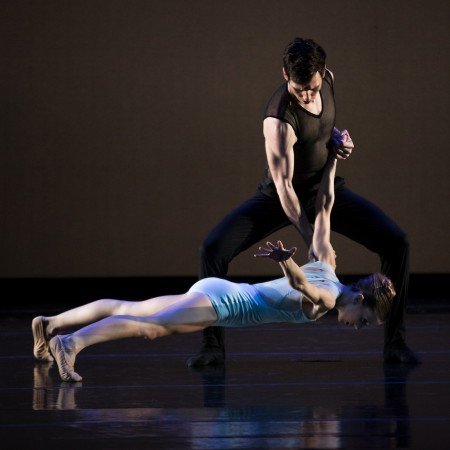 OBT Founding Artistic Director James Canfield can be a controversial figure, choreographically, yet I found his Drifted in a Deeper Land quite good. An “AIDS ballet,” it depicts great tenderness and the process of grief in a way that was profoundly moving and quite beautiful. Chauncey Parsons and Brian Simcoe appeared as two who seemed to be saying farewell. Canfield’s use of a visual pause button as a compositional device was spot on (these two men hold each other in a freeze frame at one point, as the other men act as a Greek Chorus, commenting on the story/action). I didn’t find it a sad piece, but rather one of love, kindness, and compassion. 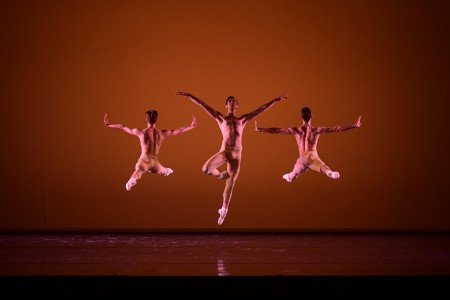 Ever since I saw my first Jirí Kylián ballet (Symphony of Psalms) at the Queen Elizabeth Theatre in Vancouver, B.C., quite by chance over 30 years ago, I have been a huge, huge fan of his work. Set for a cast of women, Falling Angels — from 1989, premiered by Nederlands Dans Theater, is a tribal work using Tom-Tom drumming as its score. Perhaps on the longish side, it is nevertheless a solid work that, like the first, bears repeat viewings.

My only production fuss is that both The Dying Swan (solo cello and piano) and Left Unsaid (solo violin) could and should have been performed with live music.

I always enjoy OBT’s forays in the cozy setting of Portland’s Newmark and note that next year’s 2018-19 season adds on one more set of performances in this enjoyable venue.