What would motivate a presumably rational and reasonable adult to drive round trip through the driving rain from Seattle to Portland on a recent weekend?

Why that would be Oregon Ballet Theatre’s (OBT’s) handsome production of George Balanchine’s “The Nutcracker”. It’s not like I’ve never seen it before, but the allure of this attractive young ballet company and the prospect of enjoying (and thereby, supporting) its shows was too much to ignore. 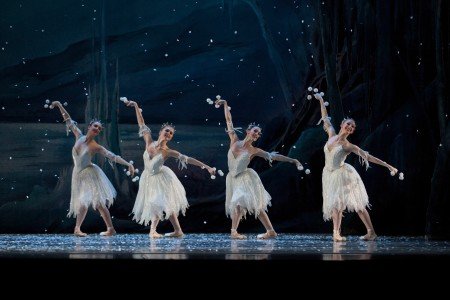 It’s a sense of adventure in travel, too, that brings me to journey southward every few months. OBT really picked itself up under the direction of former Artistic Director Christopher Stowell and this momentum is continuing with its current AD, Kevin Irving.

Stowell inaugurated the use of Balanchine’s iconic Nutcracker, which premiered in New York in 1954, and it’s just the right fit for OBT’s dancers, its School students whose trained dancers take the children’s roles, as well as its production team and the mighty OBT Orchestra. The production is not too big, not too small, with enough dancing, story line, and challenges to keep the interest of the performers as well as that of the metro Portland audience. 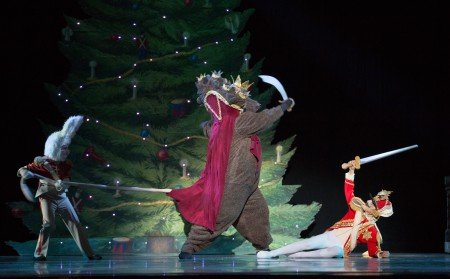 The show that I attended was packed with excited and enthusiastic youth of all ages, many dressed up and primed for the occasion. This is part of the fun. Also, OBT has the only lobby that I know of that serves actual hand-roasted nuts before the curtain and at intermission. The warm aroma of cinnamon filled the space and got the audience ready for what was to be a yummy show.

Some of my favorite OBT dancers were on the roster:  Xuan Cheng as the Sugar Plum Fairy; Brian Simcoe as her Cavalier; and as Dew Drop, Ansa Deguchi.

Act I showed off the strong and charming dancing skills of Jessica Lind and Emily Parker for the duo of Columbine and Harlequin, immediately followed by the in air beats (entre chats) with flexed feet (on purpose) of Soldier Thomas Baker. That is hard enough with pointed feet! 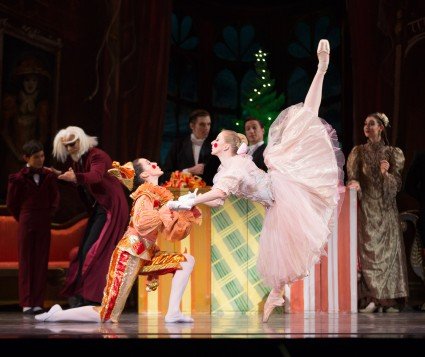 I was treated to some of the best role characterizations — that of the buoyant and funny Grandparents of Linda Besant and David Threefoot. Their attention to detail and sustaining of character throughout the Party Scene were a lesson in how to do it right. I loved how Grandma had just a bit more “tonic water” than her husband (they begin their holiday toast together, but she enjoys it perhaps a little more) and then how Mrs. Stahlbaum (Eva Burton) also then had to “sip” from the same cup as she took it from her. This was very droll — and one had to pay attention.

Normally I don’t mention intermissions in a review, but this one was too lively and fun to ignore. I was struck by the joy of people-watching and being able to go out and again enjoy the scent of chestnuts roasting on an open fire, so to speak. The OBT gift shop was doing a lively business. (I have to confess that I purchased a whole case of boxes of the unique OBT Nutcracker Spice Tea, thus completing my own holiday shopping. I started doing this a few years ago and, as everyone loves this special and locally-made blend, have continued doing so. I highly recommend it.) 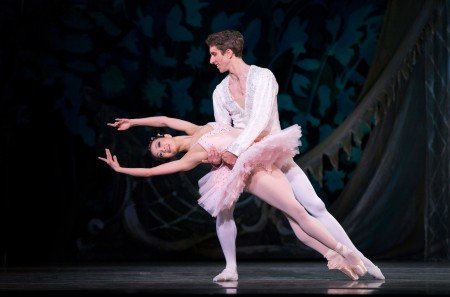 Coming back to Act II, where many consider the “real” dancing to take place, as it’s filled with divertissement after divertissement, I was treated to Cheng’s Sugar Plum Fairy. Cheng is so strong that every step, phrase, and movement are not only clearly and cleanly presented, she also phrased her moments so they were in the now. She displayed great balances and the Grand Pas de deux with Simcoe was just perfect. The long balance in first arabesque where she is pulled forward while poised on a device that allows this to happen was magical and thrilling.

Steamy Hot Chocolate was bouncy and snappy with leads Makino Hildestad and Adam Hartley. Exotic Coffee was nicely interpreted by Martina Chavez (this was actually performed to a Georgian tune, as revealed during Brooke Manning’s excellent pre-show PowerPoint presentation).

It would be an understatement to say that most men in dance like to jump, this being perhaps why many got into dancing in the first place, including myself — true to this day. Grand allegro — leaps, big traveling steps, etc. can be deployed choreographically in many ways and such is found in the short but exciting and fun Tea, with Thomas Baker shooting out of the tea box wheeled in by his helpers Malia McClanahan and Kayama Stephens. Baker showed off his elevation and entre chat earlier as the Soldier and here again his elevation captured great air, plus the concluding multiple split jumps to second position — all to appreciative applause. 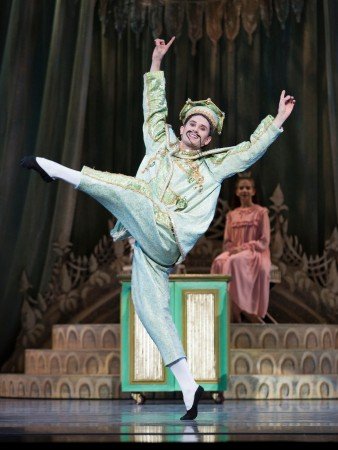 Avery Reiners’ Candy Cane overtly and charmingly showed off jumping through hula hoops, including a double swirl and swoop of it at the end. This was performed to what most think of as the “Russian” dance. The exciting and energetic music that underscores the dancing brought it to an exciting conclusion.

Perhaps Balanchine’s most brilliant choreography in this ballet is what he created for Marzipan Shepherdesses. The use of pointe work, something very specialized, is incorporated into what the corps of four Shepherdesses do in backup and in counterpoint to the  lead (Kelsie Nobriga). Their dancing was inspired. Pirouettes to fourth position lunges and kneeling, while pantomiming playing Pan flutes, plus piqués, hops en pointe, turning hop on a single foot all the while making dévelopée as a leg unfolds into arabesque or shows itself in attitude front are uncannily used. The choreography makes such use appear natural and utterly charming. This dance is one of my favorites and one that is sometimes taught in a Variations Ballet class to very advanced and accomplished students, giving them a good challenge and enriching their understanding of the demands, and rewards, Balanchine placed on dance artists.

Drag artist Poison Waters [Kevin Cook] hammed it up as Mother Ginger, superintending her eight young children, and as they danced, Waters performed her toilette, putting on makeup, and then taking up a tambourine as accompaniment. This was very fun and delightful.

Softer but still brilliant was the Waltz of the Flowers, led by Dewdrop Ansa Degushi. Dewdrop contains some of the most technically challenging steps in the ballet canon: sauté ronds de jambes and a complex fouetté combination. This longer dance concludes, as it should, with the bursting open of a flower bud.

My only fuss is a musical one. While the mighty OBT Orchestra sounded great, if it’s true that it was being miked, I think this was not necessary, particularly when it produced, unintentionally, I’m sure, an overbalance in some sections of the orchestra. I’d also like to see a return to either using local choirs for the end of Act I’s use of vocal effect that’s written into the score, or even the use of two female singers instead, which some versions use to good success.

What I think I heard was the use of an electronic insertion which did not work, as it was actually painful to listen to. What rational and reasonable person would go to great lengths to see a Nutcracker? Anyone who wants to enjoy, support, and feel the great love that OBT and its community brings to its work and especially to this holiday classic.