Oregon Ballet Theatre continues to grow and thrive, and its opening night program of this new season, whereupon it is celebrating its 30th anniversary, was smartly titled “OBT Roars.” 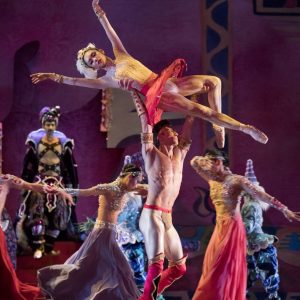 Three representative ballets were on the bill, each showcasing this talented company via different eras of its 30 years. The oldest work on the program dates from 1982, Dennis Spaight’s Scheherazade to the Rimsky-Korsakov score. It uses all of the music and, while the ballet begins simply, it builds both in terms of choreography and dramatic intensity as it progresses. Rather than tell any of the 1001 Arabian Nights tales, Spaight focuses instead on the tragic story of Scheherazade herself. This is a great story ballet for its cast: Xuan Cheng as the heroine, Peter Franc as The Golden Slave (her boyfriend), and the greedy (and insecure, for sure) Sultan danced by Brian Simcoe. Odalisques were neatly danced by Emily Parker and Eva Burton. The work was lovingly staged by Carol Shults, Jennifer Martin, and Sandra Baldwin. If the ballet suffered at all, it was because it followed on the heels of Balanchine’s Stravinsky Violin Concerto (staged by Bart Cook), as the difference between the simplicity of the Spaight work and the maturity of Balanchine’s was noticeable. For me, Scheherazade began too simply – with the female harem walking in from stage left, posing, and then repeating this. Fortunately for both the ballet and me, Spaight’s delve into this work became increasingly better choreographically, and by the time it got to the full court scenes, it had filled and fleshed out. 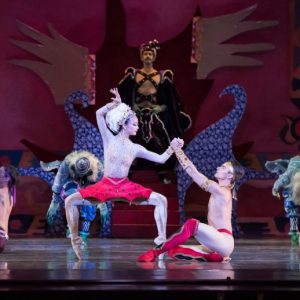 In The Middle, Somewhat Elevated by William Forsythe opened the bill. Forsythe first made this deceptively simple ballet for the Paris Opera Ballet in 1987 and it’s gone ’round the world ever since, delighting both cast members and audiences alike with its use of classicism that’s pushed and pulled to its logical boundaries. My only personal fuss is the industrial sound score — this genre is now dated and, frankly, the dance is far better than it and deserves better music. Bravo again to Cheng, Franc, Burton and to Makino Hayashi, Thomas Baker (excellent!), Parker, Simcoe, Jessica Lind, and Kimberly Fromm. 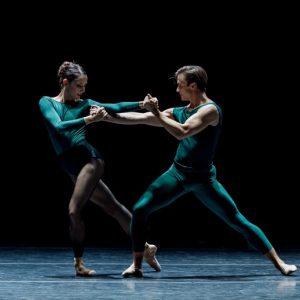 A Balanchine masterwork from the 1972 Stravinsky Festival was the protein in the sandwich (Stravinsky Violin Concerto). As a side story, believe it or not, the second pas de deux from this wonderful work had its Northwest premiere at the old, now gone, Corbet Theatre of Centralia College, when two PNB dancers, Alejandra Bronfman and Benjamin Houk, made it their debut out-of-town so to speak when they both appeared as guest dancers with the ballet school and company I was directing at the time, Chehalis Ballet Center. PNB had acquired the full ballet and had been teaching and coaching its dancers in it, when Francia sent these two down. I was SO honored, and my only concern was how this very contemporary ballet might be received in conservative Lewis County. I need not have feared, as they loved it. Part of the point of bringing in professional dancers was to educate both audiences and our students, and I was so grateful that Bronfman and Houk offered and agreed to do a special run of the duet just for the students to watch and enjoy. They were so generous of their time and talent. The music was live, with one of our very talented students playing the orchestral reduction on the piano and a Seattle Symphony Orchestra friend of Houk’s doing the violin solo part. Balanchine in rural Washington — how special and wonderful!! 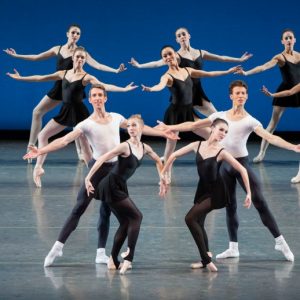 At OBT, this duet (Aria II) was danced in all of its maturity and power by Lind and Simcoe. OBT is very “up” for this kind of ballet – technically and artistically, and it was great seeing them do it again, having its OBT premiere in 2016. I like how OBT assigns one (or both) of its ballet masters to the repertory and the level of thoughtful detail they each bring shows itself on stage. Jeffrey Stanton for the Forsythe work, Lisa Kipp for the Balanchine, and both for Spaight’s.

The last two works on the program — the Balanchine and Spaight — were mightily support by the OBT Orchestra, conducted by Niel DePonte, who has been at its helm since 1985.