The Nutcracker is a multi-layered and many-splendored thing. Many American communities have their respective versions which can range from the simple to the elaborate to the traditional or to the experimental and creative.

Oregon Ballet Theatre’s production of George Balanchine’s The Nutcracker falls into the conservative camp. Sweet, traditional, with a happy ending, it’s a “G” rated ballet that appeals to youngsters of all ages. 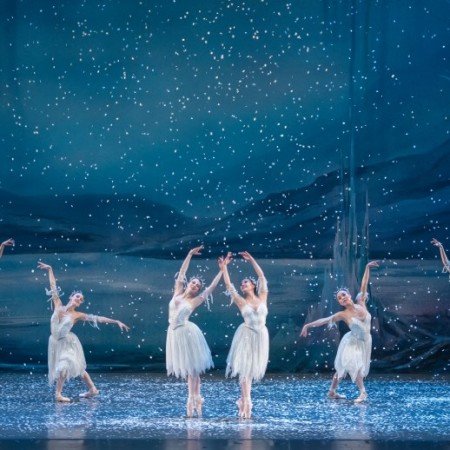 Oregon Ballet Theatre and OBT2 dancers
in OBT’s production of
“George Balanchine’s ‘The Nutcracker'”
Photo by Yi Yin
Virtually all ages are represented on stage, from the Bunny and the Angels who open Act II, to the 8 children who pop out of Mother Ginger’s skirt, to Grandma and Grandpa of the Party Scene and finally, to the Cavalier and his Sugar Plum Fairy, The Nutcracker is a ballet in which one can literally grow up through the ranks, as many have done and are doing. I was personally pleased and proud that Fay Ulibarri, the daughter of one of my former students, OBT School faculty member Robin Ulibarri, was making her debut as an Angel. She did great, as did they all, and it was fun to note that her grandmother commented to me that she was more nervous for Fay than Fay was for herself (already a trouper).
It helps that the lobby is filled with the aroma of sweet-smelling savory roasting chestnuts, the “Ballet Boutique” stations are chock-a-block stuffed with Nutcracker-related goodies, including the wonderful and unique OBT’s “tea” (get it?!) of which I purchased two cases. Christmas shopping done!

I attended the first of the evening shows, the run having debuted that afternoon. I found the company in great shape and in high holiday spirits. The ensembles looked tight, and the entire cast appeared very well rehearsed and “up” for the show. 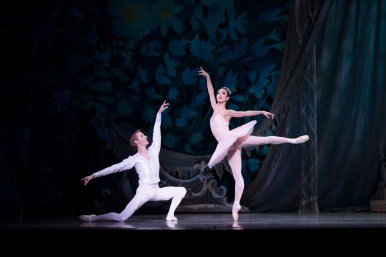 It’s been fun enjoying OBT over 15 years or so and seeing how some of my  favorite dancers have flourished and grown along with it. Some, such as retired principal Alison Roper, were always at the top of their game, while others gained necessary artistic maturity and form. It’s so much fun seeing them in both new and returning roles.

This time, Xuan Cheng as the iconic Sugar Plum Fairy led the Act II cast and was totally in command of the triple demands — balancer, turner, and jumper; all three rolled up into one impressive package. Witnessing her was a rare treat indeed. Her Cavalier was Brian Simcoe in whom I have complete confidence. He is one of the company members who has demonstrated consistent growth and is now at the top of his game. I hope this lasts for a long, long time! 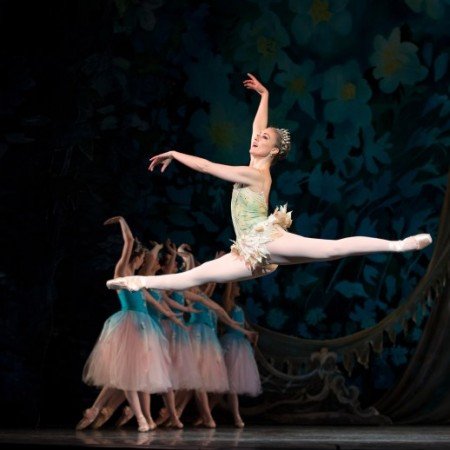 Oregon Ballet Theatre dancer Candace Bouchard
and members of the company in OBT’s production
of “George Balanchine’s ‘The Nutcracker'”
Photo by James McGrew
Another lead role is that of Dew Drop, leading the Flowers of Act II. Katherine Montague has endless legs and the sharp attack and balon required for its double rond de jambe sauté and turning manege at its conclusion.

I enjoy some of the small differences between OBT’s production and that of Pacific Northwest Ballet, both doing the Balanchine choreography but with completely different sets and costumes. One of most memorable is how the Grandmother is spun around by Herr Drosselmeier ’til she’s dizzy and falls into the arm of Grandfather. Cute, droll. I also crave and love OBT’s Mother Ginger of Poison Waters whose mild antics mesh with what I want and expect to see — on the silly and mildly naughty side. Totally still “G “rated but funny and fun. Putting on powder — face and under arms; puckering up to a mirror for lipstick; having a swig (or two); shaking both her/his shoulders and the tambourine. 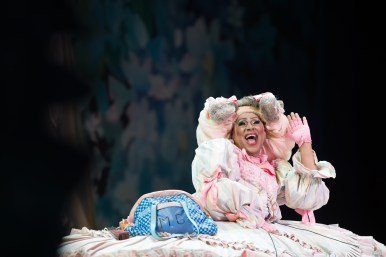 And now for the dancing. Top drawer from beginning to end. Dancing dolls and soldier of the Party Scene to the Snowflakes, to Act II’s divertissement: Spanish Hot Chocolate; Arabian; Candy Canes (Russian); Mother Ginger, her enormous skirt and Polichinelles; Flowers and finally, the Grand Pas de Deux and Finale. I mentioned the one “gimmick” and that’s how at the end of the Grand Pas de Deux, the Sugar Plum Fairy steps onto a device that allows her to be pulled and slid across the stage for a bit…on full pointe. Very impressive and exciting, indeed.

350 plus roundtrip miles and totally worth it to relax and enjoy one the of best Nutcrackers around.
The mighty OBT Orchestra was led my maestro Niel DePonte.