Awakening — The Kiss of Practice, or Improving on Petipa

What a joy and privilege to be able to enjoy watching the revival of a ballet as it’s brought back from 10 years in mothballs to fruition on the stage. Such was the case recently as I trained it down to Portland and back on Amtrak to observe Oregon Ballet Theatre’s cast and crew breathing life again into this apex of classicism in ballet, former OBT Artistic Director Christopher Stowell’s production of Petipa’s 1890 icon, The Sleeping Beauty.

Our group was welcomed by OBT historian Linda Besant, who gave us a very interesting overview of the background of this ballet and its OBT history. 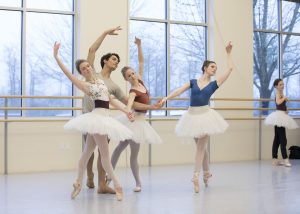 I got to watch two segments of that afternoon’s rehearsal — the Garland Dance from the Prologue and Act II’s “ballet blanc” where the Lilac Fairy shows the Prince a vision of Princess Aurora. Both rehearsals were led by OBT’s resident ballet mistress and rehearsal director, Lisa Kipp.

While based upon and retaining much of what I understand to be the original Petipa such as for the ballet blanc, it was also obvious to me that, choreographically, the Garland Dance has been improved upon by Stowell — at least compared to some of the others that I’ve seen. His version moves well and while packed with ever-changing patterns and formations, it’s also clear, interesting, and very pleasant. A sunny and happy dance, it’s an old-fashioned peasant dance that helps set up the contrast to the wicked doings forthcoming. It also gives opportunity to a large cast with something for everyone to do, including mighty mites from the OBT School (who were absent during rehearsal, as it was during regular school hours, but you could tell when and where they were to go, as the “big” dancers either paused or posed their formations that made this clear). 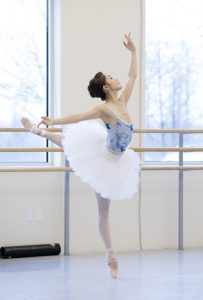 I enjoyed observing how each dancer, as part of a team, worked out the myriad details such as how to turn the garlands over — does one hold it still and the other turn, or both?

There is a healthy and positive atmosphere to these proceedings, and it was fun to see a small piece of the process that goes into producing this major ballet.