The Sleeping Beauty is a major work of art, not just another dance. Debuting in St. Petersburg in 1890, it represents the apex of classical ballet, and Christopher Stowell’s 2010 re-staging of it for Oregon Ballet Theatre represented a peak in OBT’s development — artistic and otherwise. It takes significant resources to put this ballet on properly, and so it was one of the feathers in Stowell’s cap a couple of years before his tenure as OBT’s Artistic Director ended. (Stowell is now the Associate Artistic Director of the National Ballet of Canada in Toronto.) Stowell was in the house and took a well-deserved bow with the company at the end of the evening. (I also spied his parents, Kent Stowell and Francia Russell, in attendance — they must have been so proud!)

It was smart of the current OBT Artistic Director, Kevin Irving, to bring this ballet back — it sells well, frankly, and fully utilizes OBT’s dancers as well as those behind the scenes. As I mentioned, it was a treat for the audience to witness the great choreography, music, and dancing, all fused together into one glorious ballet. 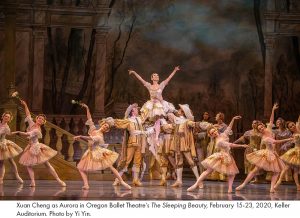 Speaking of glorious dancing, principal dancer Xuan Cheng as Aurora; Brian Simcoe as Prince Florimund, Eva Burton as The Lilac Fairy of Wisdom, and Rehearsal Director Lisa Kipp as Carabosse, The Evil Fairy (the one who gets accidentally left off the guest list of the Prologue’s Christening — a MAJOR faux pas), were all fabulous, and I enjoyed them tremendously.

When Cheng joined the company, she was strong, and she has become even stronger over the years. As Aurora, she was in full command of her generous technique and expressive soul. Every detail was there — a glance, a turn of the head or hand. Cheng exhibited excellent phrasing, balances, and musicalicality. Simcoe is a strong dancer in his own right, and he was an experienced and empathetic partner.

Principals appeared in three out of the four acts, and thus there was a lot of wonderful dancing. For example, there was the thrilling iconic Rose Adagio, the Vision Scene, and, of course, the Grand Pas de deux of Act III. 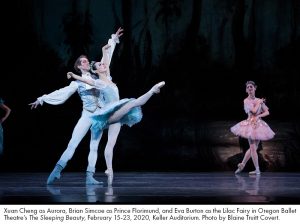 The Sleeping Beauty’s Grand Pas de deux requires a style that is very pure. There should be clean, exact lines. Many years ago when Seattle Ballet Ensemble performed it, there was no one to teach it nor coach, but the company was determined to learn it. A trip to the University of Washington library yielded archival dance films, and hours were spent scrutinizing them. The piano score was unearthed in the music library. It was only performed on tour a couple of times. While it was fun and exciting to do, it was also very hard. (Don Quixote was easier.) I can tell you how we worked on those fish dives!

Cheng and Simcoe made each thing look easy. In fact, the dancing looked fluid and sharp from the entire cast, from OBT School kiddos in the Garland Dance to each level of the company and guests. Jeff Stanton (ballet master) excelled as King Florestan, as did Lisa Sundstrom as His Queen. James Holstad was a clueless Catalabutte (the functionary who leaves off Carabosse’s name).

The various fairy dances, there to bestow gifts from each fairy to the newborn Aurora, were as fun as they were charming and vivacious. The fairies were Beauty, Wit, Serenity, Charm, Courage, and a good Internet connection (just seeing if you’re still with me). The Lilac Fairy saved the day by reducing the Evil Fairy’s curse from death to a long sleep. Yet Aurora still pricked her finger on a spindle on the occasion of her 16th birthday. Bravo to conductor Niel DePonte for giving The Lilac Fairy music for her solo at a reasonable tempo. Too often the tempo is too fast. 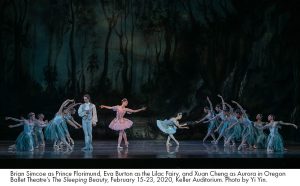 The Rose Adagio is and was glorious. It took place over about 9 minutes of breathless anticipation from the perspective of the audience as the dancers adeptly tackled the choreography. Aurora’s Suitors — Thomas Baker; Adam Hartley; Michael Linsmeier; and Theodore Watler were elegant. In partnering Cheng, they each were alert to every nuance (length of balance, taking/releasing hands, etc.), and they made the filigree of this Adagio come to life. So much joy!

I liked how the Vision Scene unfolded with The Lilac Fairy showing The Prince the lovely Aurora and explaining how to find and awaken her (she mimed “Just think!” — it’s the kiss). Cutting his way through the web surrounding the slumbering castle, Prince Florimund found Aurora, awakened her, and reversed the curse. Then the whole castle awakened, followed by the fun and glorious Wedding Act.

I say up front my only fuss about this act was the missing-in-action White Cat dance. Puss-in-Boots and The White Cat (Linsmeier and Olivia Ornelas) made their entrance and Finale appearance, but the dance itself was cut (perhaps due to potential overtime?). The Pas de Quatre, however, danced by Baker; Hannah Davis; Jessica Lind, and Emily Parker, was very well choreographed and brightly performed. 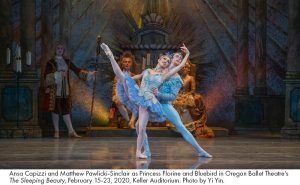 One of the other iconic and very famous duets is the so-called Bluebird pas de deux. The first Bluebird was Enrico Cechetti (who later played the Evil Fairy). The Bluebird character is well known for having to execute 24 brisé volés (a back and forth beating step that flies across the stage). Matthew Pawlicki-Sinclair nailed the whole thing, as did his Princess Florine, Ansa Capizzi, who nailed the hops on pointe, with a dévelopée into arabesque (how it should be done).

The entire ballet concluded with chaos restored to order, a group Polonaise (shouldn’t all social encounters end this way?!), and a tableaux vivant.

The music was swell, exciting, and uplifting, and the mighty OBT Orchestra was “on.” All left happy and delighted. It was a great, great Valentine’s Day gift, indeed.