Oregon Ballet Theatre revisited the classic and iconic Swan Lake, unveiling its newly revised production this past weekend. Using, for the most part, the sets and costumes from its past full-length production (purchased from Pacific Northwest Ballet when that company surplussed its original production in favor of its current Ming Cho Lee designs), with Act I, Scene I, having a new stage right set of a village forge.

The biggest change was the substitution of the usual Black Swan Pas de Deux music with music that is now used for George Balanchine’s Tchaikovsky Pas de Deux. As I understand it, the ballet’s first Odette/Odile was dissatisfied with a segment of the 1877 original Act III choreography — a pas de six, and after three performances of the original Bolshoi version traveled to St. Petersburg to request new material for Odile, a pas de deux which Petipa choreographed and Tchaikovsky subsequently composed. After being out of the repertory for a number of years, Swan Lake was revived and re-staged with its choreographic Petipa/Ivanov basis in 1895, following the passing of its composer in 1893, but without the additional Tchaikovsky pas de deux music. Due to this music being composed later than the original full score, it was never published, and was thought to have been lost. Found in the Bolshoi Archives in 1953, this special score was brought to the attention of Mr. Balanchine and made into a duet for Violette Verdy and Conrad Ludlow of New York City Ballet in 1960, and is now virtually iconic itself. OBT’s new version is full of bright technical showcase challenges, including 16 fouettés instead of the normal 32 for Odile during its coda. 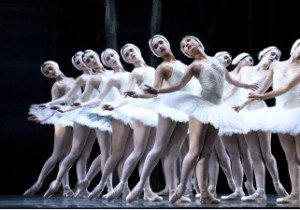 The other change was not having its principal characters jump off of a rock into the lake (created by the tears of Odette’s mother, made upon hearing her daughter had been turned into a changeling swan by the evil sorcerer Von Rothbart) only to be reunited in love in the afterlife. In this case, the young and carefree Siegfried has matured by the last act, through a magical lesson his father, the King (Colby Parsons), has set up to instruct him in distinguishing between fantasy and reality. During the last act, instead an image of a young King and his wife (Martina Chavez, also costumed like a swan) dance together, with the corps of swans bouréeing and dancing in and out, to be replaced by his successor son, Siegfried, standing on a low platform, surrounded by his subjects. And while the dramatic Tchaikovsky music builds and roars its emotional effects, Siegfried is absolutely still, perhaps absorbing and digesting these life-lessons, comes to his epiphany, looks to his left and finds his true love, in the guise of the Blacksmith’s Daughter, who, taking down her peasant hood, shows that she is, in fact, Odette, wearing the swan queen’s headpiece.

Act II’s Ballroom scene (think Act III in most productions) had the foreign character dancers not only vying for Siegfried’s hand in marriage but also making light of some of the dances, particularly the Spanish dance, a duo for squabling and acting-out sisters, Makino Hildestad and Emily Parker with Lisa Kipp as their duenna. I’m not entirely convinced inserting comedy into this act worked well from a dramaturgical viewpoint, perhaps going too far in some cases, although it was entertaining and done perhaps to purposely make a contrast between this and the Black Swan Grand Pas de Deux that is, in itself, dramatic and the turning point of a would-be tragedy. 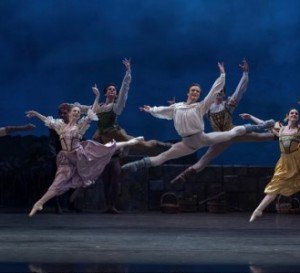 Danced straight was the Hungarian czardas with Ruby Mae Lefevre and OBT School Director, Anthony Jones as her grandfather. This was an excellent rendition, using authentic czardas steps and motifs, building to a lively and zippy climax.

The Russian Dance featured the very strong Eva Burton sporting a very stern Moscovite-like stone face, who could only get the full attention of the prince by tapping him on the rear with her ubiqitious handkerchief. With four men — Alessandro Angelini, Adam Hartley, Michael Linsmeier, and Brian Simcoe, it was an energetic and quite good dance.

Neapolitan was also done for the most part straightforwardly, although the female half of the duet did keep wanting to flirt with the prince. Bouncy, with hops, turns in arabesque and lively allegro jumps, tuned in time with respective tambourines, it was an equally good showcase for Candace Bouchard and Thomas Baker. It really put the spotlight on Baker, and I hope this talented dancer gets more solo opportunities like this in the future, as this dance really showed he’s come into his own.

OBT Principal Dancer Peter Franc has the princely requisite of a strong jawline, and also the technique, line, and bravura to go with it. When you’re watching him, his confidence and security draws you into the storyline and dance. He had the most difficult assignment of having to act without moving much in the last act — to transform his character into a worthy king. 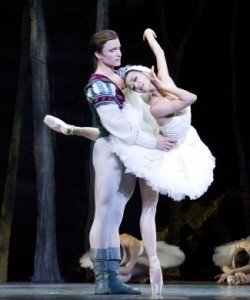 It’s long been a thrill and privilege to watch Xuan Cheng dance. This artist is very, very strong both technically and emotionally, imbuing her roles with every inch that she has…and then some. In this version, she had the additional challenge of being in all acts, not just first appearing in the traditional Act II lakeside scene. Cheng, in three roles — Blacksmith’s Daughter, Odette, and Odile, as usual brought off her assignments with aplomb and grace.

Everyone was thrilled and most pleased that this new production was accompanied by the mighty OBT Orchestra, under the baton of maestro Niel DePonte.