Virtual is such a funny word. Did it really happen or not? Were we really there or not? In these pandemic times, I’m SO grateful that performing arts presenters are figuring out creative ways to engage and continue to stay connected to their audiences and fans, often through Zoom or similar types of conference computing platforms that allow participants to be in the moment, present — almost.

Happily, Ballet Sun Valley Festival 2020, rather than having the Pacific Northwest Ballet company fly to Idaho, arranged for PNB to fly instead to our computer screens so that we could view and enjoy a mix of archival videos from PNB’s vast repertory and video performances that were more recently rehearsed and then filmed on PNB’s home stage of McCaw Hall.

These newly-filmed ballets are of the “smaller” genre — casts fewer in size and more intimate in scale but still able to be powerful and impactful.

This 1.5 hour montage was introduced by Kelli Quinlan, Executive Director, who thanked the sponsors of the program and PNB. PNB’s Artistic Director, Peter Boal, then took the platform to cheerily and kindly welcomed the Sun Valley audiences, expressing that while the company had hoped to dance at the Pavillion in Sun Valley, this was the next, best thing.

James Moore, the soloist in Jessica Lang’s The Calling, introduced this work himself. The Calling is a dancer alone work that begins with the artist facing upstage and costumed in a very long white pleated skirt. It’s a work built upon strong gestural themes and develops with iterations repeated and altered. With only a couple of arabesques, the work’s interpretation is dependent on the performer’s use of the upper body. Moore’s extensive experience as a PNB artist showed clearly with the depth he gave to his performance. The dance concludes with the dancer, having twisted himself, pulling the skirt closer and tighter around the body, posing effectively. I’ve seen this dance several times, and this intimate viewing gave me the impression that the work’s calling, so to speak, is of the nature of someone working through a crisis of some kind — perhaps spiritual and definitely highly personal. Just right in length and tone, it’s a brief dance that’s a “keeper.”

You can pull up “The Mistake Waltz” on YouTube anytime, from a handful of companies, but seeing PNB’s rendition of this Robbins excerpt from The Concert, filmed in 2018, was fun itself, with an introduction wryly given by one of its cast members, Angelica Generosa (“I’m the one in the glasses.”) The visual gags are fun, of course, but for me, the greatest delight is the end where the dancers get into a tiff about who is correct with their port de bras and poses. As a dancer and dance teacher, I’ve lived through this! And then, there’s the one dancer who realizes she has the wrong arm up and S L O W L Y changes, secretly hoping that no one will notice, and, of course, we all do. Always a riot and great dance fun!

Choreographer Benjamin Millepied introduced his Appassionata, set to Beethoven’s Op. 57 piano sonata, here a tender duet danced by former PNB dancer Karel Cruz and Elizabeth Murphy. A duet in white (costumes), it is as pure as the color suggests. Lots of giving, taking, partnered lifts and shapes, it’s a very nice dance that was well-curated for this venue.

Eva Stone has become a major contemporary dance-influencer in the Seattle area for a couple of decades, including directing a festival titled “Chop Shop” that annually showcases modern and contemporary works. Here, she presented an excerpt from her FOIL, the second movement (“Be Still”) trio, cast for women who appear to be semi-nude, wearing only long, diaphanous skirts, facing upstage nearly the entire time, who make dancing with their backs and arms an art unto themselves. It’s a brave work with a brave cast.

Murphy introduced Bacchus, the longest excerpted work on the bill. Choreographed by Matthew Neenan to music by Oliver Davis, it’s a vigorous and frolicksome dance, as the name suggests. Costumes have a deep purple theme, suggesting wine, and these have a variety of designs for the dancers. Murphy and Seth Orza have a featured duet that then breaks into a group ending. Also featured are Leta Biasucci paired nicely with Lucien Postlewaite — both bright and very technically accomplished dancers. 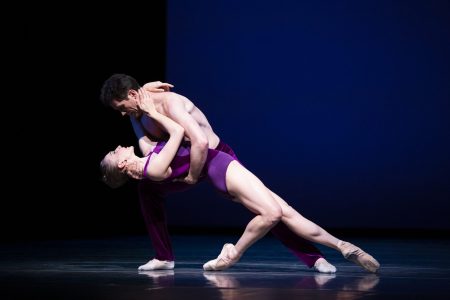 The Founder and CEO of the Sun Valley Festival, Robert Smelick, also thanked corporate sponsor Viking Cruises, leading into a short and compelling promo video. He and Quinlan then announced the “door” prize drawing of a cruise; sorry that it wasn’t me — but how fun for the lucky winner!!

Biasucci truly is one of the brightest young ballet stars of today, and I enjoyed hearing her introduction to the solo from George Balanchine’s Jewels ballet, an excerpt from Emeralds, the so-called “Bracelet Solo.” She mentioned that this was first made on the great French ballerina Violette Verdy, and that the PNB dancers were fortunate to have been coached by her. Filmed in August 2020, it’s a filigree dance — highly artistic, lovely, and I enjoy how it transports us and Biasucci, as she herself said. Ravel — piano and ‘cello beautiful and beautifully danced.

Actor Tom Skerritt introduced 2012’s film excerpt (a dress rehearsal) of one of my all-time favorite ballets, Don Quixote, here a famous and iconic “Wedding Pas de Deux,” danced by the incomparable and much-missed Kaori Nakamura (now retired from performing but on the PNB School Faculty) and Principal Dancer Postlewaite. I so enjoyed seeing her again that I had to view it twice, courtesy of being streamed so that I could re-wind. Energy, vitality, spunk and great élan. Choreographically, the only thing that I believe I disagree with Postlewaite’s leaning in to take a playful nibble on her shoulder. I found this jarring and really not necessary. Nevertheless, a spirited pas that’s fun and filled with technical showcase “opportunities,” such as the iconic 32 fouettées of the coda for the Kitri character and relevé tours in second for the gentleman. Nakamura more than did all 32, including inserting double pirouettes after every fourth, through 16, and then singles until ending in releveé sous-sus, missing only one full relevé but not the turn itself. Glorious! And for the “fan” solo, I was so pleased that Nakamura did all the requisite pas de cheval toe-hops and echappés, even if not done with the sometimes interpreted accelerando. I was quite happy she hit 5th position on the downbeat, as it should be — some dancers either make it in second or muddle the counting — never with Nakamura; always so musical and on it.

I was quite charmed by Kyle Davis’ Sylvia Pas de Deux when it premiered in 2012. Davis immediately showed he has the understanding and grasp of classical form and uses this in his creation, yet he made it as contemporary as classical ballet can be today — no fuddy-duddy musty poses but great shapes and dancing that give a nod to the style and period. Also, filmed in August 2020 with live music (the musicians and conductor masked — but not for the flutist, and social-distanced), French composer Délibes, I think, would be most pleased if he were around today to see it. Here, Davis took the part of the cavalier and Gabriella Ryan, that of Sylvia. One virtuoso step that Davis inserted for his male solo was that of turning sissonnes. OMG! And for the pizzicato female solo, Ryan took hops on pointe with ease and a relevé turning sequence that would curl the hair of many — including second position, melded with regular passé.

Nothing beats a Balanchine finale, and we were treated to just that from his Diamonds section of Jewels. It was introduced by its ballerina lead, Lesley Rausch. The footage was from a dress rehearsal filmed in 2017 when her cavalier was Karel Cruz, also now much missed from performing. The work features a large cast, and the PNB company looked in tune and really gave each pattern and sequence just the right stuff.

I saw 10 works, and it was a joy to see PNB perform again. Major thanks to Ballet Sun Valley and its team for pulling off a small miracle. Readers may want to note that PNB just last week announced its entire 2020-21 season will be online, in a similar fashion, and if this one-shot showing is any illustration of how well it can go, we can all be grateful.