Pacific Northwest Ballet’s annual Season Encore performance is one that I always enjoy and look forward to, yet it’s almost always infused with a sense of the bittersweet as it’s also used as a means to recognize and thank departing company members. This year’s edition was subtitled “A Celebration of Karel Cruz,” whose 16 years at PNB certainly have been a bright spot and whose career has been fun to follow, basking in its sunny beams.

His accolades are certainly well-deserved. I love the story he told me, in an early interview, how, after leaving Cuba for Venezuela, he lived on the roof of the studio of ballet legend Nina Novak, how he ate fruit from the tree that overhung it, and how he made his way from there ultimately to PNB. 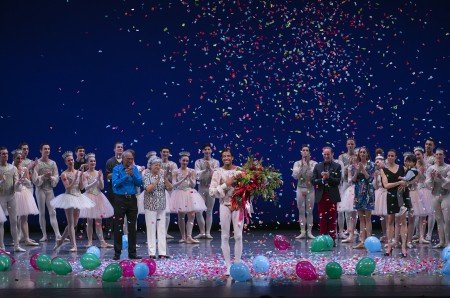 The program opened with the White Swan pas de deux from Swan Lake, featuring Sarah Ricard Orza and Dylan Ward, who made their debuts in these roles during this past season. The pas de deux was sweet, tender, nuanced — all the ingredients necessary for success. This was Kent Stowell’s version with staging by Francia Russell (after Petipa/Ivanov).

“America” from Robbins’ West Side Story Suite is always a joy for the wit and repartee between Anita (Noelani Pantastico) and Rosalia (Amanda Morgan). Their full on dancing and speaking/singing was supported by Nancy Casciano, Angeli Mamon, departing company member Nicole Rizzitano, Sarah-Gabrielle Ryan, and Nazirah Taylor.

Lastly, I got to enjoy Cruz, along with who is probably his favorite dance partner, his real-life wife, Lindsi Dec, in the pas de deux and coda from Act III of Don Quixote. I’ve loved this duet ever since seeing it and learning it as a student in the ’70s. Its exuberance and technical challenges are within the reach of most advanced-level students. Dec and Cruz’s performance was etched strongly and included many details sometimes missing — a quick turn of the head, a glance, and turns and balances galore. While the long sustained balances seem to elude Dec on this night, she powered and sailed through the rest of her assignments — including a snappy 27 fouettées at the end. Cruz’s double cabrioles, traversing a circle coupé jeté leaps and tours en l’air were spot on and exciting. The cheers they elicited were heartfelt and another joy.

Carli Samuelson’s choice to say farewell was as the Sugar Plum in the Act II pas de deux and coda from George Balanchine’s ‘The Nutcracker’, with Ezra Thomson as her Cavalier. Samuelson essayed this challenging but also bright role with ease, fitting well with Thomson as a sympathetic partner. Corps members are often the unacknowledged workhorses of a ballet company, the advantage being that you get to dance in most everything with the flipside being perhaps the same thing. PNB fortunately has long had the policy and practice of giving all ranks casting opportunities outside of the box. It says a lot about the level of a company when any member can do just about any part. Brava to Samuelson for her bright dancing.

What a treat to see Christopher Wheeldon’s After the Rain pas de deux again in such a short time span, it having been performed during the just-concluded repertory run a couple weeks before. I got treated to the same cast of Elizabeth Murphy and Seth Orza. It’s a sweet and unusual duet that’s become very popular with audiences.

I have to admit that I was greatly looking forward to Balanchine’s showcase duet from 1964, Tarantella, first done at PNB in 1985 (one cast that I saw then was the superb Deborah Hadley and Michael Auer). This showing was with the also superb Angelica Generosa (a powerhouse, if there ever was one) and the superb Soloist Matthew Renko. As Balanchine himself said about it, “It is a dazzling display piece, full of speed and high spirits.” Renko has the nuance, playful smile, and details that make his performance truly a joy. I am sorry that Renko is leaving PNB but am glad that I got to enjoy his dancing one last time, leaving on a true high note.

While it may be too big (large cast) of a ballet to tour, I couldn’t help but think in watching Diamonds from Balanchine’s full-length Jewels that this is the ballet PNB should be taking with them for their upcoming tour to Paris in a few short weeks. While brilliant may seem like low-hanging fruit of a description, the performance truly was brilliant. The company was tight, tight, tight; totally in-shape in every sense; and seasoned. It’s a thrilling dance unto itself, and holds up nicely even without the other two parts that precede it in Jewels. Lesley Rausch and Cruz were the lead couple of the pas de deux and the company at-large led off and looked terrific in its rousing and concluding Polonaise.

Thank you departing dancers for your hard work, dedication, passion, and joyous dancing. While a bittersweet experience, I left the theatre on a note of happiness and joy. I hope your future contributions to society’s greater good will be as satisfying and fulfilling.

Season Encore looked back at this past year’s season and also was a neat way to thank and say farewell to its departing family cast members and was accompanied by the mighty PNB Orchestra.