Some programs are just meant to be and their makeup automatically engenders buzz and excitement. Such is the case for Pacific Northwest Ballet’s season opener, a blockbuster of a bill with one historic and iconic Balanchine masterwork, Agon, and one of Kent Stowell’s best large-group offerings, his quite wonderful version and production of Carmina Burana. 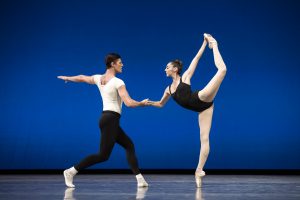 Agon is clear, clean, terse choreography set to music that’s at once unusual and classical. The music and choreography fuse together to make for one amazing ballet that, while 62 years old, seems fresh and forward-thinking nevertheless. Coached by one of its original cast members, Francia Russell, the cast members were tight, energetic, and at the top of their game. The famous Pas de Deux was danced by Laura Tisserand and Joshua Grant. This pas de deux is famous not only for its twists and turns in pushing boundaries of shapes and partnering but also for the original cast’s pairing of a white woman and a black man, so controversial then and even perhaps now. Some of the unusual partnering has the female in an arabesque penché holding hands with her male partner, except he’s on the stage floor on his back, scooting around so she/they can make a promenade pivot. Jaw dropping stuff. 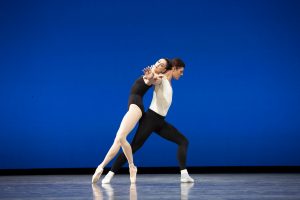 Stowell’s work is big in every sense — a large, physical set, large cast including full use of the PNB Company and a full chorus on stage but raised up in a suspended above the stage choir loft. The ballet follows the complete Carl Orff score, divided into several sections including one with perky villagers, a strong opening with 12 men and the (original) Wheel of Fortune, a tavern, and something celestial. In other words, the sacred and profane. I really enjoy this work as it unfolds — its arc, humor (observe the stage set figures that are lowered during both the In Taberna scene and later for the celestial Cour D’Amour) and for the big and detailed full-out dancing of the Company. It’s hard to single out any person, but Elle Macy was great as the woman in red in the tavern scene — a role that I long associated with Ariana Lallone (“…one hot ballerina!”), and Elizabeth Murphy and Lucien Postlewaite brought the right mixture of vulnerability and tenderness to their duet.

This was a  blockbuster of a program indeed, and smart programming.

The mighty PNB Orchestra was led by Emil de Cou.