I was reminded that the area out-of-town tryout performance, so to speak, of Balanchine’s masterwork Stravinsky Violin Concerto from New York City Ballet’s 1972 Stravinsky Festival actually occurred with “Aria II” at the old Corbet Theatre at Centralia College prior to PNB’s 1986 premiere of the entire work. When I was Director of Chehalis Ballet Center, every year I requested a pair of dancers from PNB who would come to Centralia/Chehalis to perform a duet either on our student company program and/or on our spring school recital. I strongly felt it was important for students of all ages, including their families, to be exposed to professional-level dance. To see what it can be, to be inspired, to see the choreography they’d bring with them, and to learn from this experience. Each year it was something different [as opposed to always doing the grand pas de deux from Nutcracker]. This time, Balanchine and Stravinsky! 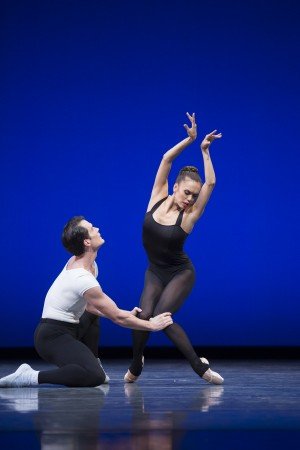 I recall too feeling so greatly honored that Francia Russell gave permission to PNB dancers Alejandra Bronfman and Benjamin Houk to perform this work this round. Honored not just to get two great dancers but sensed that she trusted us and our audience to appreciate and “get” this generous gesture and unusual pas de deux — and they and I did. Not only did the pair take on-stage warmup class with everyone — awesome in itself, but generously ran the duet an extra time just so the students could benefit from seeing them do it. [Normally all performers are backstage during rehearsals and for the show, of course.] This was in additional to their rehearsing the duet with the pianist [one of our talented ballet students who was equally talented on keyboard, Elizabeth Tausch] and violinist [someone Ben knew from the Seattle Symphony]. Both dancers reported to us feeling especially prepared, having been coached by three ballet masters in the duet — Russell and also two others, whose names I cannot recall.

I thought “Wow! Balanchine comes to Lewis County for the first time. Not “traditional” pas de deux fare, this duet is very contemporary, edgy, and with what I call a high sizzilene factor. 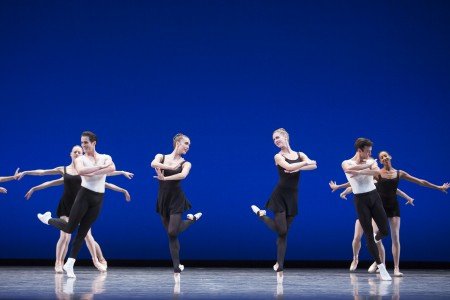 This high-edge factor I eagerly awaited to enjoy again as the curtain rose this past Saturday night on this superb ballet, with principal dancers Noelani Pantastico and Seth Orza in as one of a pair of star dancers, taking “Aria II” under their wings. The other couple were equally amazing — Lesley Rausch and Jerome Tisserand for “Aria I.” I was thrilled with their respective performances as with the entire cast. “Violin Concerto” contains real dancing, a great choreographic arch, some homey friendly gestures such as the dancers waving at each other, and delicious technical challenges and feats. All seemingly as easy as pie. It equally showcases both genders, with the men getting their due, too.

The program opened with Twyla Tharp’s 1990 Brief Fling made first for American Ballet Theatre and later premiered by PNB in 2013, the big difference this time being that the music was performed live. A feat made possible by the composer’s widow, Dana Colombier finding and providing original musical scores and materials.

Brief Fling is a great opener, full of robust dancing using Scottish themes as its movement and scenic and costume base. Composer Michael Colombier put together a fun and lively score, utilizing, among others, Percy Grainger’s Country Gardens and Handel in the Strand. Both Pantastico and Orza were featured. I loved the “lift” section with Leta Biasucci and three men — Steven Loch, Jonathan Porretta, and Ezra Thomson. Its humor infectious and delightful. Was it me or do you think it was coincidence that Porretta was costumed all in green and his character seemed to be that of leprechaun and pixy? So great to have this amazing dancer back on stage.

The most serious work was the middle one — from one of my favorite choreographers, Jiri Kylian — his 1981 Forgotten Land, set to Benjamin Britten’s haunting score, Sinfonia da Requiem. This lush score pays tribute to an area of Britten’s homeland where they were in continual danger of being engulfed by the sea. Kind of like how some of our Northwest towns that are long-lost and now under water or that have become ghost towns. Places only on old maps and in distant memory.

The choreography depicted angst, some measure of grief, perhaps even rebellion against the literal tide of time, and with no real harmonious resolution except perhaps the acceptance of it by the three women who are left turned and twisted toward the audience as the curtain come down.

A strong ensemble work with a very strong and unified cast, I was particularly impressed with the dramatic dancing of Batkhurel Bold — a great part of him. I tend to think of Bold in cavalier parts and it was nice seeing him well cast in something earthy and serious.

The mighty PNB Orchestra was alternately conducted by Emil de Cou and Alastair Willis. Violin soloist for the Stravinsky was Michael Jinsoo Lim.