I have in my archives a 1980s letter from Jerome Robbins in response to a request from me for his recollections of Nelle Fisher. I had intended to research and write a book on Nelle to be titled Broadway Nelle, but it never quite happened, although I received some lovely responses from her colleagues.

Nelle, a native Seattleite, worked with him as an original cast member in some of his shows, following her five years of dancing with Martha Graham. When Mr. Robbins was putting together his Jerome Robbins on Broadway show, Nelle told me that he contacted her and asked that she come to New York to help him in reconstructing some of his dances. Nelle said that, having really good recall, she could remember the various versions of dances that Robbins made as a part of his creative process. While Nelle was ultimately not able to go to New York, as she needed to stay here in Seattle to assist her older sister, Dorothy, a long-time Seattle ballet teacher, with Dorothy’s studio, she did recount some great stories. 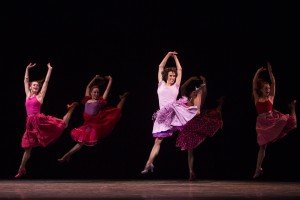 I also wasn’t able to see Robbins’ show, so I was delighted when Pacific Northwest Ballet acquired one section of this show, West Side Story Suite. Set to the now famous and iconic music of Leonard Bernstein and lyrics by Stephen Sondheim, it’s in seven sections: Prologue; Something’s Coming; Dance at the Gym; Cool; America; Rumble; and Somewhere Ballet.

Each ballet of the evening was “introduced” by short excerpts from original promotional film clips. For this ballet, it was the trailer for the movie version of the Broadway musical. Shot on the actual West Side, the background of tenement buildings reminded us not only of the environs of the time but also how these buildings were very soon demolished to make way for today’s sparkling Lincoln Center for the Performing Arts complex which includes the Metropolitan Opera and the home of New York City Ballet.

PNB has a deservedly fine reputation of being able to be great “stylists,” meaning that they can easily move from dance style to dance style — classical ballets, contemporary ballets, and here a musical that utilizes ballet vocabulary but is presented as a different kind of expression.

Kudos to the cast who well rose to the challenge of being “triple-threats” — singing, acting, and dancing: Benjamin Griffiths as Tony; James Moore as Riff; the menacing Bernardo of Batkhurel Bold; Noelani Pantastico as Anita; Sarah-Gabrielle Ryan as Maria; Nicole Rizzitano as Rosalia, and the entire large-size cast. 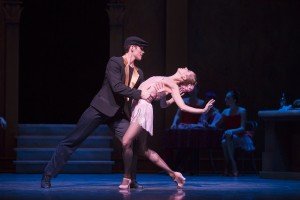 For a sheer fun romp, probably nothing much can beat Balanchine’s Slaughter on Tenth Avenue, his excerpt from the 1936 musical, On Your Toes. The promotional video in this instance showed Balanchine’s second wife, Vera Zorina in the part of the Showgirl and a young and talented Eddie Albert (TV’s Green Acres star).

Who knew Steven Loch could tap dance up a storm — thinking his tap solo could literally save his life from a Gangster (Jordan Pacitti), this gangster uttering the immortal line at the end of the dance, showing he’s not the sharpest knife in the drawer, (from sitting in the audience to the Hoofer who is onstage) “Hey, buddy! Can you spare some bullets?”

This ballet is a riot of cardboard characters and filled with fun dancing. Notable is Lindsi Dec showing her gams to great advantage and the inept Keystone Cop-like running around in vain looking for trouble to break up of the three Policemen: Ryan Cardea, Kyle Davis, and Ezra Thomson.

Balanchine, regardless of the intent of the ballet, knows how to put together a dance and his rousing all-cast, all dancing finale is just that, rousing and great fun. 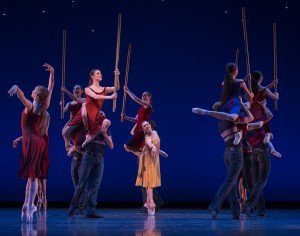 For pure dancing pleasure with a light nod to the musical’s story, Christopher Wheeldon’s Carousel (A Dance), made for a perfect opener. Wheeldon has the ability to create really good dances for large groups — a skill not everyone has. To the big waltzing music of Richard Rodgers, a special shout out to Sarah Ricard Orza and Seth Orza, who gave a super reading of the melancholy of the musical, Carousel being not a happy time for its characters (violence, suicide, regret, etc.), of a pair of ill-fated lovers. I thoroughly enjoyed seeing the introductory film clip from the filmed version of a snippet of the dream ballet with Susan Luckey and Jacques d’Amboise (more! more!). First choreographed by Agnes de Mille, Wheeldon captures the spirit and spiritedness of both the original, in homage perhaps, but making it a fresh “Reader’s Digest” edition of today.