Cinderella has a long, long history in folk tales and legends and is one of the most beloved. Kent Stowell’s 1994 version for Pacific Northwest Ballet was revived this season and has more than held up over time. To me, it seemed fresh, the story clearly told, and every detail thought through. Framed by Tony Straiges’ sets and Martin Pakledinaz’s great costume designs, Stowell’s choreography moves the story forward but also gives a backstory. I’m also glad that he kept the father in, who is cut from some versions entirely. 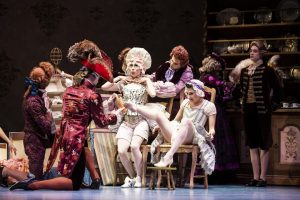 Act I balances pathos and humor, and Lesley Rausch’s portrayal of the heroine is finely etched, her acting straight forward and unfussy. I enjoyed the imperiousness of Laura Tisserand’s Stepmother (this character never quite gets it) and the silliness of the Stepsisters, Nancy Casciano and Abby Jayne DeAngelo, whose acting IS appropriately fussy and over-the-top.

Off to the ball she goes where we discover the Prince, Jerome Tisserand, and the magic of the Jester’s virtuoso dancing as deployed by Benjamin Griffiths (multiple tours, pirouettes a la seconde, flipping over his head, and cheerfully acting as a barrier between the Prince and the cloying Stepsisters). Tisserand as the Prince is elegance itself and always the refined gentleman even though the Stepsisters (and their mother) bedevil him. 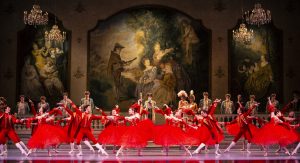 Stowell inserts into this Act II a “Theatre of Marvels,” which is intended to depict evil (an Evil Sprite, Steven Loch and his minions) and good (a Good Fairy, Sarah Richard Orza and her attendants) and concludes with a duet for Harlequin (Guillaume Basso) and Columbine (Madison Rayn Abeo). Loch has great length of line, and while Stowell’s choreography pre-dates Loch’s tenure with the Company, it fits him to a “T” with an emphasis on sharpness and quick leg action. And where has Basso been all this time? Well hidden in plain sight in the corps, so to speak, and it was great seeing this exciting young dancer in a featured role. He was well-paired with Abeo as a charming and technically proficient Columbine. 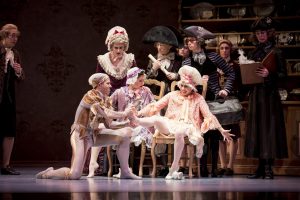 Act III brings us back to the ashes of the family home where at first Cinderella believes that she perhaps had been dreaming all of this up, but finds her ballroom slipper and realizes that the experience was real. She then hides it in the fireplace’s log bucket as she hears the clatter of the family arriving home. Later, the Prince and his entourage come in to seek his princess, the correct wearer of the glittering ballroom slipper. Of course the Stepsisters each try it, as does the Stepmother, but it’s the father who, upon discovering the ballroom slipper that his daughter had hidden, takes it and reveals it to her true love, the Prince.

Everyone loves how the ballet concludes — with a brief duet for the happy couple whose last pose is a turning held arabesque for Cinderella, with her Prince Charming supporting her (promenading her) all the while glitter comes wafting down from the theater’s flies. Joyous sighs for all.

Cinderella is a big ballet with a large cast and the timing of its revival is so needed in today’s climate. It’s fun to enjoy all the way around. Our group talked about and praised it for a good while following the performance.

The mighty PNB Orchestra was led by its long-time conductor, Emil de Cou.