Seeing the Pacific Northwest Ballet (PNB) on March 17 was a fine way to wear green and celebrate not only my Dad’s birthday but with it, St. Patrick’s Day — a great tradition in Seattle.

Another Seattle tradition is for PNB to have its March program be titled “Director’s Choice.” It’s usually a compendium of shorter and newer works. This time the presentation included a new ballet by PNB company member Ezra Thomson, The Perpetual State; two by William Forsythe, his Slingerland Duet and One Flat Thing, reproduced; and Red Angels by a talented choreographer who left us too soon, Ulysses Dove. 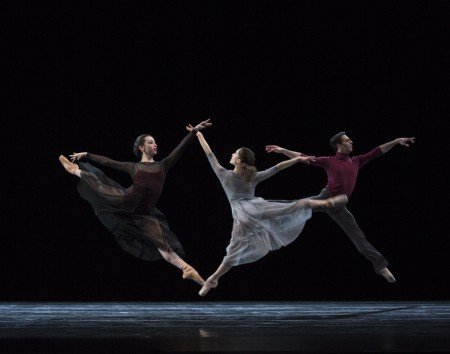 I’ve admired Thomson’s pieces ever since being smitten by his first creation. I recall how much I enjoyed his creativity and vision. While I did enjoy The Perpetual State (to Poulenc’s Concerto for Two Pianos and Orchestra in D minor), I found that it left me both slightly confused and conflicted. It’s nicely constructed and clearly thought out, but the use of an ensemble I found at times unnecessary and drew attention away from the two (sometimes happening simultaneously) pas de deux, which are critical to the dance’s story arc. 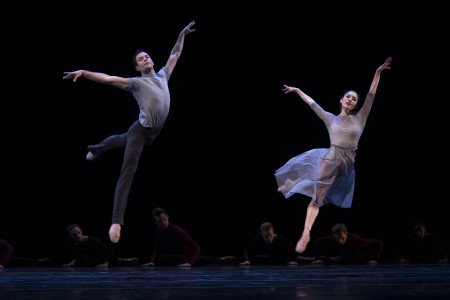 These duets suggest love lost and new, young love found, remembrance and embrace. As the young couple, Leta Biasucci and Jerome Tisserand got to not only show off their considerable dancing talents but also to extend their acting chops as well, and the ballet was particularly a showcase for Biasucci, whose bright technique and expressive face have “star” written all over them. 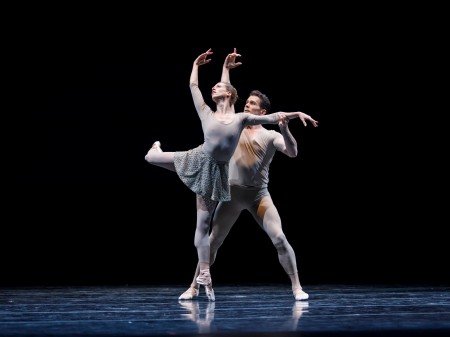 Speaking of stars, I’d say that both Lesley Rausch and Seth Orza have this dust sprinkled on them, too. Slingerland Duet is a short work, filled with lush partnering and extended techniques. I loved seeing this excerpt from Forsythe’s longer PNB work from 2015, New Suite. 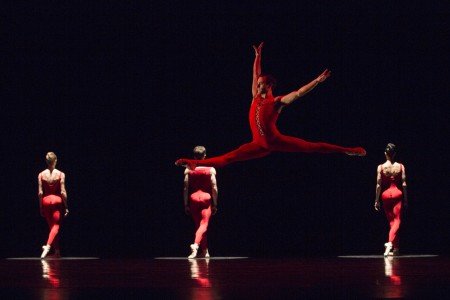 Sheer gutsy dancing and sharp attack characterize Dove’s Red Angels. This red hot work gets down to business from the get-go. It’s composed of several short sections. Each section shows off different aspects of the classical work but in extended ways — a thrusting movement into a held arabesque or jumping up échappé onto pointe that also jabs into space, all showing the wonderful control of execution these PNB dancers (Laura Tisserand, Leta Biasucci, William Lin-Yee,  and Benjamin Griffiths) have at their command. Richard Einhorn’s music was played by the first (and only) interpreter of Red Angels, electric (literally) violinist Mary Rowell. I was reminded of how the great American modern dance pioneer Martha Graham used to like to refer to dancers as “the acrobats of God.” This was fitting here.

I lightly joked with one of my subscriber-mates that she had her favorite One Flat Thing, reproduced to look forward to on this program. (Actually, her favorite ballet is Giselle.) A Forsythe piece from 2008, One Flat Thing, reproduced pushes the boundaries of not just what ballet can be, but what dance is or is not. A large group work, it begins with the dancers rushing forward toward the audience, pell-mell, pulling rectangular metal tables behind them, quickly setting them up in a grid. The cast then goes under, over, and around these tables in a variety of ways, always sharply, sometimes with others in unison or as a kind of weird duet, and then the work concludes as it began, but in reverse. It’s perhaps not everyone’s cup of tea, but one that certainly can be interesting to view and which certainly leaves people talking.